429 running poorly no matter what I do

Hello, I come here seeking help. This might be long, but I want to thoroughly explain what I have already done, to avoid rehashing the same things (as I have done myself for weeks now).

I have a 64 Deville that I received in non running condition.  Old fuel had seized up some valves, and just about everything had to be taken apart, cleaned, and put back together.

I've had a really tough time getting it to run properly.  I had the heads cleaned up, a valve job performed, and hardened exhaust valve seats installed.

Compression is excellent and uniform across all cylinders, around 190.

I rebuilt the carburetor.

I disassembled and cleaned the fuel pump.

The fuel tank and sending unit have been replaced.

Obvious tuneup parts have been replaced with new.

First problem was that I was unable to get the idle down to 480RPMs in drive.  All vacuum lines were disconnected and capped to perform testing.  At first, I did have a leaking intake manifold gasket, I corrected that.  There are NO vacuum leaks.

After that, I was able to get the idle down, but it didn't run particularly well.  I adjusted the timing and dwell.  The car falls all over itself when trying to accelerate, and stalls most times.  No power.

I went and bought an Edelbrock 1411 750CFM carburetor, as I suspected trouble (and doubted my rebuild) on the original Rochester.  I was able to get the car to kind of run with this carb, but only at idle.  Before I installed it, I removed the intake manifold, drilled, tapped, and installed brass plugs into the exhaust ports beneath the carburetor so that I could run any carburetor.  That's just a nasty idea anyway, but I digress.

I warmed the engine, and adjusted the mixture needles on the Edelbrock to get it dialed in, and began working toward lowering the idle to the specified 480 RPMs.  It doesn't really run well down that low.

I managed to get to run long enough with the vacuum advance unhooked to get the timing set to 5 degrees BTDC, and set the dwell at 30 degrees as specified in the manual.

Back the car out of the garage- ok.. try to go, and it quits.  Very frustrating.

So this morning, I thought, maybe the fuel pump isn't doing toowell.  I don't have a gauge that goes low enough, so I just went and bought a cheesy electric fuel pump and some fresh hose, and hooked that up.

Fire it up, idles fine, kick down the idle when it warms up, fine, no problem.  Try to go- and it quits.

So finally, I decided to start advancing the timing.  Maybe this is the issue?

Now we're getting somewhere.  It's now at least driveable.  But something is just not right.  It misses and spits and sputters under load, you have to feather the gas pedal to drive it.  Once you're at speed, you can ease into it and drive it to 80MPH effortlessly... the engine is clearly good and strong.  No noises, nothing- except random misfires and popping... not good at all :-(.

The advance mechanisms seem to be working.  With the timing light, quickly 'blipping' the throttle causes the timing to retard as you'd expect with reduced vacuum to the vacuum advance.

Steadily increasing the speed of the engine results in the overall timing increasing.

As far as I know, all is correct here...

So what am I missing here?  Why won't it run right, and why on earth should I have to advance the timing so much- that can't be right, nor can it be good for it long term.

I really want to drive this thing, hopefully someone can offer me some advice.

Permalink Reply by Clovis on July 2, 2017 at 11:33pm
I installed petronix ignition to eliminate the problem points. My car came with the timing at ten degrees. I put it at five and it stumbled. Found that eight to ten is best for my engine. Did you check the vacuum advance unit? It could be bad mine was. These things are supposed to run with ported vacuum not manifold. There should be no vacuum while connected and at idle. I've also installed fuel injection and the engine runs better to me at 600 rpm. Fuel injection adjusts idle in gear or out. I was at 600 for best engine performance even with the carburetor.

I'm not against the electronic ignition, however, it had to work when it was new, and this is a low mileage car.  My goal is to get it right stock before making any major changes.  Actually, I'd like to get the original carburetor to work.  The Edelbrock was just a very expensive troubleshooting mechanism.

Are you sure about the ported vacuum?  The vacuum advance was connected to the original carburetor on a front port, one which grabs its vacuum from below the throttle plates as far as I can tell.

I don't actually think the 4GC has a ported vacuum port.

Pull the number 1 plug and turn the engine over by hand until you ALMOST have top dead centre, now, get a mate who has a bit of a brain and poke a Philips screw driver in the plug hole.

Carefully turn the engine by hand (You may need to rock it back and forth a little) until you mate tells you that, you have a true TOP DEAD CENTRE.

Now check your timing marks and see how close they are. If they are within a degree or two, then as Clovis suggested, give it 10 degrees with a timing light and see how that goes.

If however, the timing marks are way out, re-mark the balancer to suit so you have a true TDC.

Its always hard to diagnose a problem on a forum, as everyone at some point, has had the same issue but not always the same thing causing it.

I wish you well.

Pulling only one plug ain't gonna make it possible to turn the engine by hand. You need to remove all plugs and it might still be very difficult as pumps, generator and other equipment will create resistance. But with all plugs out its very easy to turn the engine by the starter and if being careful should be able to get the rotor pointing in the right direction.

I also think "re-mark the balancer" Is not a proper way to do this. If the mark is way out it indicates the distributor to be in incorrect position.

I'll politely disagree Anders, what it tells you, is the outer ring of balancer has moved.

Everything has to begin with a correct reference point, and if the balancer outer ring has turned, (fairly common on that style of balancer) you can time an engine till the cows come home, it will never be correct.

Permalink Reply by Clovis on July 2, 2017 at 11:50pm
Mine was the carter. Here is the ported connection to the bottom left
Attachments:

Permalink Reply by Clovis on July 2, 2017 at 11:56pm
I'd have to check the manual to see how much advance is added with the vacuum advance. But if it's 15* plus the 5-8* equals 20-21* total advance at idle. Soon as you crack the throttle you loose all that advance as the vacuum drops off.

I'm trying to understand what you're getting at (and hopefully learn something).

I understand what you're saying, but I don't understand the solution, so to speak.

Of course there is maximum vacuum at idle, so the vacuum advance would be at full advance, connected to manifold vacuum.

Connecting to ported vacuum would cause the vacuum advance to come on above idle.. right?

If there's no vacuum at a ported vacuum source at idle, why would the manual specify disconnecting the vacuum line to set the timing... as it should have no effect?

It seems like this is a touchy subject when you do any reading online, but the general consensus is that ported vacuum wasn't used for the vacuum advance until emission controlled engines were being built.

The only thing I'm very sure of is that the vacuum port on the original Rochester carburetor sources vacuum from below the closed throttle plates, and is therefore manifold vacuum.

I may be way off on this , but your   symptoms seem to me that your cam lobes are not opening the valves enough. Have you inspected the cam? I know 25,000 miles ain't much but can't think of anything else that would cause those problems. Possibly your timing gears/ chain are badly worn, but sounds like timing issue for sure.

You might not have done this but some else might have done it and installed the distributor incorrectly. Its very easy to get it off set when reinstalling. 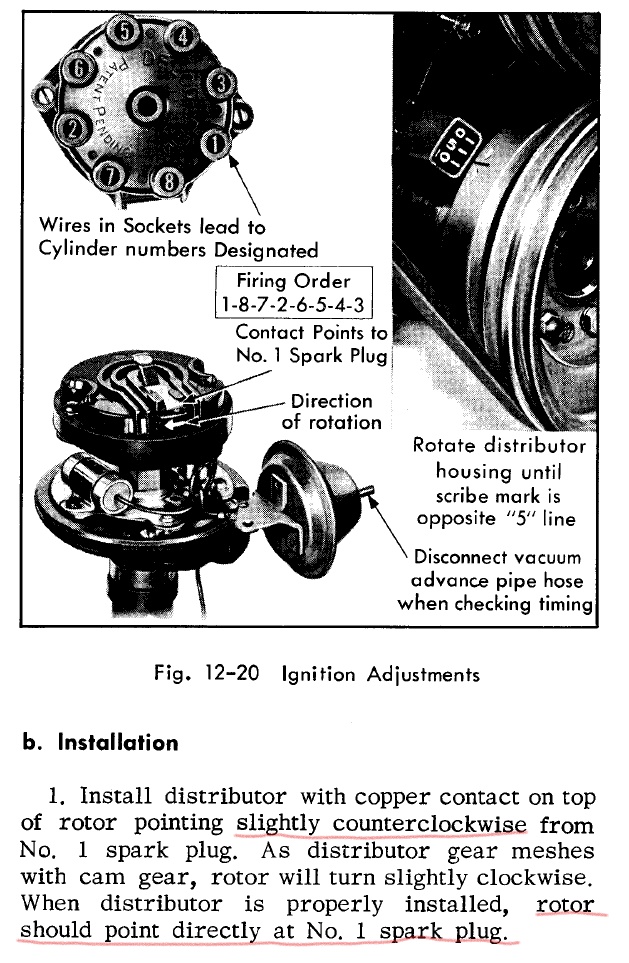 Thanks for the replies, folks.

I bought this car from the original owner, who is also a friend.  I've known him and the car for a very long time.  It was his father's.  It sat in a barn for over 30 years without starting or moving. He had a lot of other cars, too.  Due to financial difficulties, he sold the barns, and moved the cars to his residence.  At that time (probably 6 or 7 years ago at this point) the car started and ran fine, and made the five mile trip with no issues... sort of.

That trip probably caused the problems, as the nasty old fuel glued a few of the intake valves into the guides, because all the trouble started just a couple of years later.

I doubt any serious engine wear, as his dad changed the oil every 1000 miles.  The car was 100% original, and even had the original tires.  The distributor has never been out, even to this day.  I didn't even bother to remove it when I pulled the heads to take them to the machine shop.

So this 'development' is since I worked on the engine.

Now, the timing mark was mentioned, and there might be something to that.  I did have the balancer off, as I painted it, and many of the other components.  It seems like it only fit one way.

I'm assuming I must have gotten it right, since there are six bolts, and I doubt there's any way the engine could run at all with the timing being 60 degrees off.

Also, the spark plugs are P43S.  They appear to be burning lean.