Thanks again for so much assistance on this swap from Carter AFB to Edelbrock 1406. Since I posted last, several things have happened and I'll go into some detail for those who might wish to attempt this. May to be too much for others.

But to recap, I put in the 1406 and it would not stop leaking from the choke side, despite 5 tries at installations with new gaskets. I called Edelbrock and they said "Our carbs don't leak. You're supposed to use an adaptor. Buy the Transdapt 2064." So I ordered that adaptor and simultaneously ordered another new Edelbrock 1406 in case the adaptor didn't stop the leak and I had a bad new carb.

The Transdapt 2064 actually DID stop the leak. I also removed the Cadillac metal shim that goes over the gasket, and of course the Cadillac phenolic spacer, since there wasn't room for it(without installing new studs OR going up too high and hitting the hood when closed).

Result? The instant starting I wanted, that's what my Carter didn't do. I had to pump the car 20 times and still it might die, and ran badly until fully warm, possibly stranding you in an intersection.

NOW? MORE PROBLEMS. The car starts fast, with the electric choke closed. It idles higher, which also helps, but as soon as you tap the accelerator, the idle goes down, which means your brakes and power steering don't work. But let's assume I could fix that.

THE BIGGER PROBLEMS--The brake pedal feels totally different! It grabs, causing a locked wheel and skidding. Once you learn to moderate brake pedal pressure, it feels "funny", doesn't feel connected to the brakes, and also doesn't return upward as fast, like everything is in slow motion. And, the car doesn't shift gears upward well at all, so you are stuck in 2nd gear for too long and the car is straining but won't upshift. Eventually, over 30 mph somewhere, it does shift, but then of course doesn't downshift because the transmission downshift doesn't work because you cannot mount it to the Edelbrock carb. Even Jason has not found a fix for this yet. AND, the car doesn't drive very well, when you push the accelerator, it makes a bit of a roar, but doesn't immediately pick up speed. It's a Cadillac, and it's not smooth.

WHAT I DID NOT DO YET--I didn't adjust the mixture with the two front screws. Most people said the car drove well as is, out of the box, so I'm trying that first. But today I will run the car to warm and adjust the mixture. But that won't fix the vacuum issue where the brakes are no longer right. I put front discs in only a few weeks ago, but with the Carter carb, the action on the pedal was good and I never got brake lockup like I'm getting now.

WHAT ELSE I DIDN'T DO--I have not found the choke tubes I'm supposed to plug inside the intake manifold. I've looked at all the photos on this site and done other searches online and I still don't know where they are. I'm told I should put a screw in them and cut it off at the top. Probably have to buy a tool for that, I only have a battery-powered Dremel.

IN SUMMARY--I will send back the unopened new carb. I will fiddle a bit more with this one, but I really think I just want a newly rebuilt Carter AFB. The car drove fine with it once warm, but obviously had a defective choke. Now I have a car that starts fast, doesn't drive well warm, doesn't fit the trans kickdown switch, doesn't fit the air cleaner(I'm still driving without one, don't have the air cleaner adaptors yet) and messes with the feel and reliability of my power brake system.

I do wonder if the Transdapt has messed me up somehow. But if I switch back to the original phenolic spacer instead, the carb will leak again, who knows why because it appears to be a tight seal and it takes time to keep trying combinations of spacers and shims and gaskets. I did put it all in with Tony's instruction on the proper order(I think it was metal shim on top.)

For now, still trying. Thought this would take one day!! Has been a few weeks.

Yes, I have a tight connection on the back for the brake vacuum, and another metal pipe goes into that connection, not sure what it is. See photo below of rear of carb. On the front, PCV hose is in the right place, and timing hose from carb is inserted on the choke side, with the other timing nipple open and not plugged. I don't know if that's a vacuum leak. Otherwise I think everything is set up properly.

See illustration below which shoul be on the 2nd page of your Installation manual. 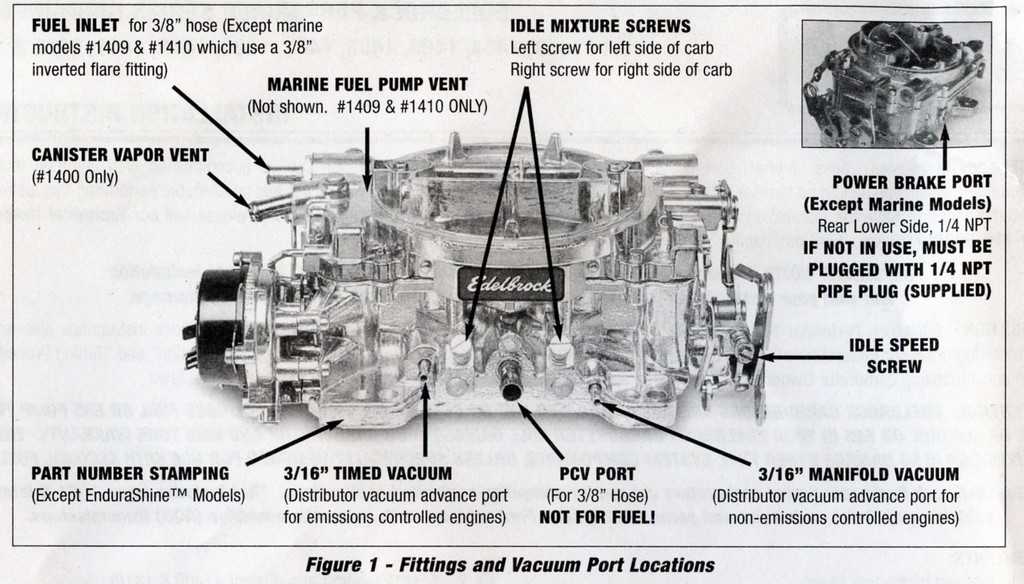 You do not want to use the old bakellite intake to carb spacer. It has an open channel for the PCV gases which is built into the base of the Edelbrock, and is not as efficient as the new spacer/insulators. Put it aside and use a straight through 3/8" spacer/insulator.

OK, great. I knew about the two vacuum ports but had not plugged one yet since I thought I saw that you had been experimenting with using both sides. Also when you say "a straight through 3/8" spacer", I assume the Transdapt that was reco'd to me by Edelbrock will suffice for that, since that's what I'm using now. And I have removed the thin metal shim as I was told I didn't need that any longer. About to run the car and adjust the mixture and plug the other vacuum port and see if that helps the brakes and delay in upshifting.

Straight through spacer means any spacer that serves nothing more than as a spacer to lift the carb up off the intake.  From my write-up:

3) replace original intake to carb spacer with PCV nipple with 3/8" insulator spacer. I used a Trans-Dapt TRD-2446, however, there are other brands on the market. 3/8" seems ideal height, especially if you want to use the stock air cleaner and the adaptor sold by Russ Austin. If you are running an  aftermarket air cleaner and have additional height clearance to hood, you might consider a taller spacer for even better air/fuel mixing and dispersion.

OK, thanks, that's clear. Just trying to get stable with what I have, which is the Transdapt adaptor, somewhat tapered, not a pure spacer. Want to see if I can get decent performance and solid brakes with this Edelbrock as it's installed now with a few tweaks.

Preston, if that adaptor is metal, it needs to be removed and replaced with a non metallic spacer. That metal adaptor is transferring every bit of heat into the carburetor.

Thanks, good point. I am also ordering a rebuilt Carter AFB because I think I need to go back to that to solve all these problems. It will be interesting to see if that is the best answer and I hope it helps other people on the site. The Edelbrock has wasted a month of my summer driving experience and is just too much bother.

Did you plug your open manifold vacuum port on LH front of carb. That is going to be your #1 issue! Leaving that open is like installing a set of plug wires and leaving a couple of wires off the car. As far as insulator spacers I had excellent luck with the trans-dapt 2446. Go on the Summit Racing and other sites that leave reviews and you will see a lot of positive response on this one in terms of heat dissipation. Yes, thanks, I did plug it. I think the installation is solid. The Edelbrock is just not delivering. The car stalled twice on a slight slope on my driveway even with the mixture adjusted and the idle turned up. It seemed to not like the tiny grade of the driveway. I can't drive the car with spongy, inconsistent brakes, stalling and a lack of upshifting. I am going back to a newly rebuilt Carter. I've lost a few weeks of summer enjoyment and the car feels quite unreliable with the new Edelbrock. I don't think a single thing is done wrong here EXCEPT I did not remove the intake manifold at any time. I have another new Edelbrock 1406 sitting here in a box but I don't want to open another one and fill it with gas, only to return it. Appreciate all the diligent assistance here! What would we do without this resource? I don't think the spacer is the answer here as I'm using a Transdapt adapter reco'd by Edelbrock tech assistance line.

A day late, but I saw a picture of MLK riding through Baltimore in a convertible and after a little research I found a different angle and saw that the car was a black '63 convertible so I had to…Continue

Does the Hollander Interchange Classic Search Manual III have any info for a 1964 CDV?  Wanted to see if anyone has used it before purchasing the book.Thanks!Continue