Everything went quite well switching from Carter to Edelbrock, except for usual issues(no place to mount the transmission kickdown switch). Car runs and starts much better! BUT, it leaks on the choke side, tightened properly with a new gasket supplied by Edelbrock. I will try a new gasket, and reluctant to use "gasket sealer" with gasoline, though I might try it if I have to. There's no adapter between the carb and manifold. The manifold top was spotless, apparently recently machined as it had swirl marks, so the surfaces are pristine with no old gasket material. Don't want to return the carb but may have to.

ALSO...the new carb has a PCV hole in front, with no hose from my car to match(the old carb did not have this.)  Just plug that hole up? Otherwise, everything matched and I think the electric choke will be much better than the old style on the Carter.

THANKS to all the awesome people who comment with authority on this forum!

Russ has the only good advice on this thread.  It could be the float level...
Here's even better advice :  FIND THE LEAK. (more about how to accomplish this later) It's not leaking from a gasket on the bottom or a hot choke.  The bowls in the carb are made to store gasoline, so with or without the gasket it shouldn't leak.  That said, Carter and Edelbrock carbs have drilled-in passages which are sealed off at the factory with ball or cup plugs.  These can leak from the bottom of the carburetor and would be best solved by returning the unit.

How to find your leak:

You need to fill your carburetor like it's being filled by the pump to re-create the leak.  Take it off the manifold and get it to the bench.  You want to elevate it so you can see all sides while you're checking it.  Here's an example of a carb on a stand: 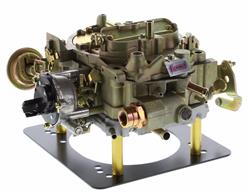 You can improvise this setup with four long bolts and two nuts at every hole.

Next, you want to fill the carburetor with gasoline.  Connect a rubber fuel line to the inlet tube, and hold it up in the air so you can fill it with a small funnel.  Think beer bong, that's what it will look like when it's set up.  Then, pour gasoline into the funnel until the carb won't take anymore, or starts to leak out.  If the floats are adjusted ok, and the needle valves are working, the carburetor should simply stop letting gas in after the level is reached.  Leave the funnel above the level of the inlet and watch for the fuel.  If it's leaking statically (engine off), you'll find out where soon enough, and report back what you see for hints on fixing it.

If the flow out of the funnel never stops, nor even slows, then you have a sunken float, bent float or bad needle and seat.  The top of the carb will then need to come off to see the root of the problem.
Be sure to check the bottom, too, i've had the plugs leak on one of my carters, and it would leak into the plenum, flood, and hydrolock overnight.  This method worked to find that problem, and it will help you get to the bottom of yours, too.

Wonderfully detailed information! It would seem near impossible to me to get a brand new Edelbrock from the factory and have it leak...when i called the help line, the guy was offended I even suggested a flawed unit(haha) and he told me to order a Transdapt adapter. This seems to me just a replica of the polyphenic spacer I already have, and nothing leaked with the Carter AFB the car had previously, so the problem seems with the carb. Will ponder next move but I'm thinking of putting the Carter back on just so I can use the car, and returning the Edelbrock, which has been a huge pain so far.

You have gone this far, I would insist that the seller swap it out. Not sure where you bought it but issues like this is one reason I shop Amazon Prime more and more these days. They will take back a $5 CD as quick as they will take back a $2000 65" 4K UHD TV.  The leak info Mark posted is great, but you shouldn't have to find a leak on a new carb.  That is their issue, not yours.

Rebuild a 54/55 year old carb and install and it leaks, then that is your issue.  I've bought 4 Edelbrocks over the years and they were pop on and go, and ran great, no leaks, with only adjustments being tweaks concerning getting heat off the base, and rejetting a tad.

So... good or bad advice, my advice is to swap it out if you have any type of gasoline leak from the carb.  It should not leak... period!  Chasing down a gas leak is chasing down their leak.  Modifications to eliminate excessive heat soak and possible vapor lock (which I experienced at 1st), or porting out the front primaries to better match the front primaries on the bigger 750cfm 1411 is what my article is about.

Thanks, Jason, as a matter of fact I bought it from Amazon for $343 so no problem sending it back. You are inspiring me to give the Edelbrock another try and maybe get some professional help sorting out the choke tubes and non-existent PCV and plugging the holes in the manifold, providing it runs with the replacement carb. Your assistance is invaluable, as is Tony's and Mark's and these cars would be much harder to own without this incredible forum.

I love me some Amazon prime.   A bit off topic but Thompson Cadillac wanted a $1600 for the main ABS brake module for my 02 Escalade EXT and said it would take 2 weeks. Went home and there were 3 on Amazon, for like $850. Ordered it on Friday and was delivered to my door on Sunday... Sunday! You can't beat that with a stick.  I don't shop for hardly anything in stores these days except for lumber and such for restoration of our 106 year old house at home depot and lowes, and go into BJ's and Kohl's but that is about it. I haven't been in an office supply store in probably 3 years now!  I order most of my AutoZone stuff via their website ... which often has significant discounts... 20% or more.. and take cores and used oil back to their store! As far as diagnosing a faulty leaking carb, I would save have at it. I just don't have time when they can have another unit to you usually in 2 days.

Thank you, yes, it's going back. Perhaps I just got a defective one and this whole thing should've been much simpler!

Troubleshoot first. Always know what is wrong before you buy/exchange/swap out parts.  Could just be a out of adjustment float, and you will be on the road that much quicker.

Thanks, Russ, I don't think I should take a brand new carb that leaks and endeavor to troubleshoot it and adjust the floats. I gave it 5 attempts at installation with various connections and gasket configs and I am sending it back for one more try with a new Edelbrock unit. I don't like to return things, it's very inefficient, but I tried hard to make this one work.

Yes, we get a box from Amazon about 3 times a week. Who'd have thought they'd be the best source for a carburetor? And for gaskets? I'm friends with the 99 year old mother of the Everly Brothers and she lives alone, so now I order food for her from Amazon as it's the only way she can get it easily(she's in Nashville and I'm in Connecticut).

To summerize this thread :
Any Edelbrock carb --is not a bolt on and go item -as the intake manifold must be removed and the old choke tube blocked to use the new electric choke on it at a minimuum
Jetting will be required to get the fuel mixture correct
Carb must come completely apart for jetting changes
The Edelbrock 1406 with an electric choke is the carb to use --requiring no physical modifications to the top of the stock intake
It is --most like -the stock Carter carb --in CfM air volume and performance but considered the economy carb-- by Edelbrock

All due respect -- but Jasons carb installation and manifold modifications - Are Simply ---Not for all to try to do !!
This is a very special performance upgrade and you will need to have special skills
( as Jason has) to accomplish his modifications correctly
The engine will require the intake to come off the car and be plugged and the cars heads must come off to block the heat passages there ( that is refered to ) to reduce the heat getting to the intake manifold heat passage --from the heads

I've got a 1963 Series 62 convertible.Anyone know the size of the three screws used to mount the Striker Support to the trim above the windshield? The "Striker Support" appears to be the name of the…Continue