How much play is there in a new set of 390 chain and gears?  See the attached video.  I know there is no tensioner but I'm concerned this may be too much play.  I'm most grateful for any feedback.

That looks good to me.

Thank you for the feedback Russ

Looks good to me

Doesn't look right to me ; why is the chain not sitting down all the way  across the top of the cam sprocket? If it did , this would give even more slack in the chain .. Gotta give it thumbs down. Heck , could your bearings be that worn out?

Engine is well documented at 83,000 original miles from the one owner.  Everything has been super clean which reveals it was well maintained while on the road.  The original gears were on it and they actually looked great with no cracking or any debris, from the coating, that they are known for.  I rechecked and the chain fully seats into the teeth of the gear.  Thanks for the feedback.

Thanks Ben, I guess its kinda of an optical illusion  the way that chain looks to me . My engine had 75,000 miles on it & owned by a little old lady . The  camshaft sprocket  coating ( plastic?) had only 1 crack in it  but replaced it while I was in there.

I remember some slackness when I rebuilt mine with new parts way back but cannot remember just how much. I think you are good to go. You definitely do not want it tight as it would have constant tension and wear between the teeth and chain.

There is no 'finger slack test; specification for a timing chain.  Yours looks normal, but you can't tell that way, so this is all speculation.
If you want to be sure about timing chain slack, put the timing cover, harmonic balancer, and distributor back on the engine (if not done already) and remove the distributor cap, leaving the rotor in place.    Rotate the motor clockwise only until the balancer mark lines up with the 0 line on the timing cover.  If you go past the mark, don't backtrack, go around once more and line it up.  It's essential to this test that the chain is 'loaded' so it can't be turned counterclockwise.    Once you're set exactly on the mark, very slowly turn the crank counterclockwise until the distributor rotor just begins to turn.  Note the position of the line on the harmonic balancer, it will tell you the number of degrees of total backlash in both the timing chain and distributor drive gearset.   There is some debate on what is allowable there, but for a new chain with new gears, it should be less than five degrees.    If there is more than five degrees of backlash (there won't be), you can isolate the play to the timing set by having a helper pull up on the distributor shaft while performing the same test.  That will remove all of the slack from the cam to distributor gear and give you purely the lash from the timing chain.   If you subtract the first result from the second, you get the total lash from the distributor, measured in degrees at the crank.  Neither reading should ever be zero, some sources allow up to ten degrees combined lash before the chain needs attention, but five on a fifty year old powerplant in good condition is an acceptable benchmark, in my opinion.
all in all, though, the gear mesh looks fine on yours, I would just run it.  you can see the gap between the chain and root  diameter of the cam gear looks good.  as the gear and chain wear, that gap, counterintuitively, will shrink.

Your engine is always turning in one direction. As long as the camshaft and the crankshaft are correctly aligned then it wouldn't matter if there is a small slack on the "off side".

If you have fitted the new sprockets and chain as per the manual you will be fine. If you have OCD (like me) you also follow Marks instructions to the letter. 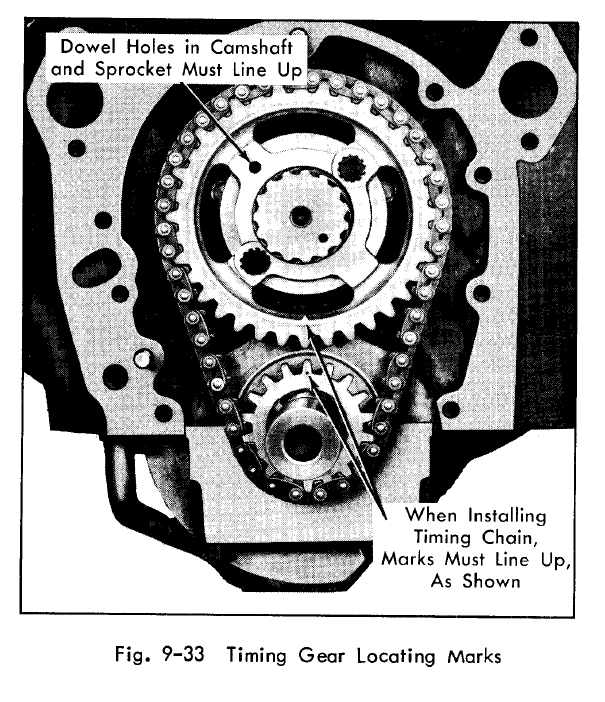 A tensioners main job is reduce the risk of the timing belt/chain to jump off but it also reduces the noice created by the belt/chain movement. Teflon coated sprockets have less noice than non-teflon. As our engines don't have a tensioner and there is not any teflon on the new sprockets you should hear a bit more noice from the new chain than from the old.