Cadillacs of the sixties.

Do any of you own the Cadillacs of the Sixties book? I was wondering if it was worth the 100 plus price they sell for.

Anyone have experience with using a summit racing carb on our cars?

Any of you guys ever change your rear end oil. Am I correct in assuming that the old oil has to be pumped out? I don't see any bolts holding a rear plate like others I've seen. I read a comment you made about the splash guard for the battery. Would you like the dimensions?

Got Herman ready for the first drive in a long time today. Got about fifty yards down the road and though I had a flat. I knew the tire had pressure so I returned to investigate and found this. 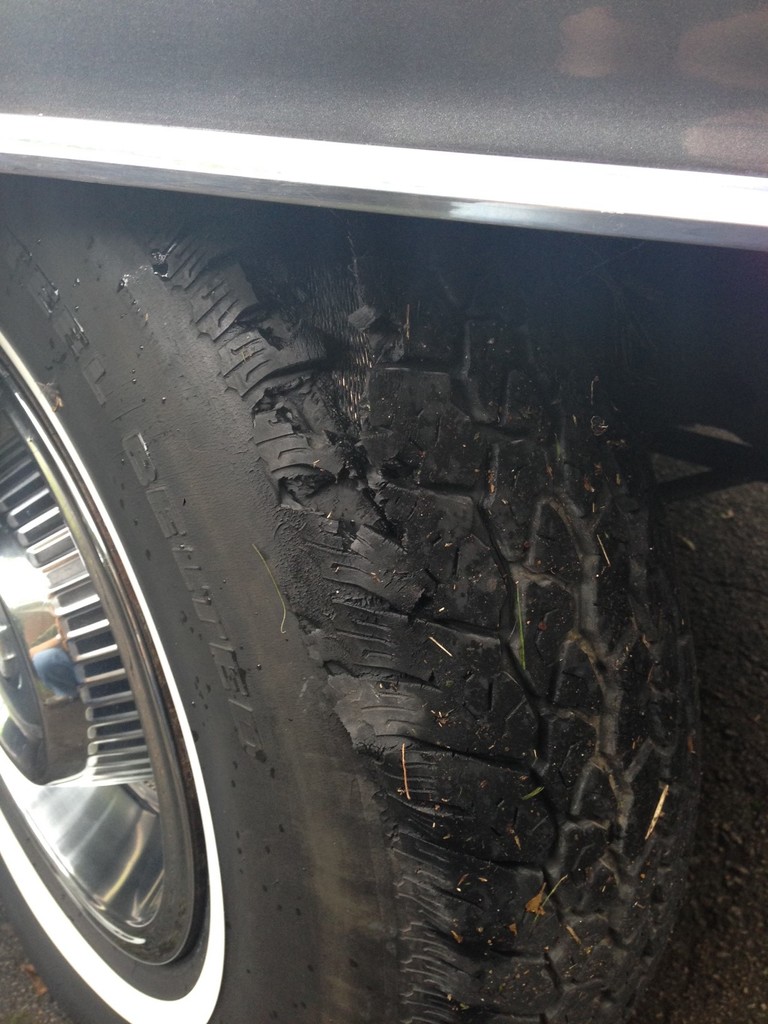 I want to stay with radials. What tires are you guys running and how well do you like them?

Shout out to the parts guys. I'm going to be doing my floor pans in the near future and I am in need of a passenger side floor pan brace as mine has rotted away with the pan. Anyone have any or able to cut one out to sell?

Here is a manual for all 63/64 owners with a Rochester carb. Lots of good info on how it operates.

Checked the manual on how to remove the rear window trim and it says a special tool is needed. What tool do you guys use? It's on this 60 Special parts car I picked up if that matters.

I'm needing a drivers side tail lamp housing. (#1 on the rear diagram) If anyone has one for sale, please send me a picture of the very best one you have. The chrome on my bumper is still very good and I would like to have one that would match the closest in condition. Also if anyone has a set of the aluminum insert shrouds (#5 on the rear diagram) I am in need on those also.

Venting my frustrations here with USA parts supply. Ordered some parts from them and they arrived quickly. Ended up not needing a strut rod bushing kit and returned for a credit. After multiple calls over the past month, I still haven't received credit. Anyone else have any trouble with this company and returns to them?

Calling on you guys that have rebuilt or parted out front ends on our cars. What size are the bushings on the upper control arms? Two different sizes listed on multiple sites available to order. Options given are 1 7/16 and 1 1/2 inch. Is the only way to know for sure to measure them?

Found me a local shop to rebuild the suspension and steering components in my front end. Do any of you guys have experience in which kits to order that are complete in the necessary parts to do a complete rebuild. What parts have to be ordered separate? I'm also having the rear end bushings and ball joint replaced. I can read what comes with the rebuild kits but I'm not familiar with all the part names needed to do a rebuild. I don't want to leave any parts out of my order and have the shop…

Just replaced my factory speakers with reproduction 10 ohm speakers from S & M Electro-Tech. They are great quality and if your just looking for the factory sound they work great. I have the stock FM radio, so the sound quality isn't near modern standards but at least now I can hear my local classic country station!!

How many non tilt column turn signal switches have you guys gone through? I replaced mine about a year ago and its now shot. Left brake lights up when right signal is activated. Right brake wont light at all and neither will light with no signal activated. If anyone has one in good shape for sale, send me an email please cause it looks like I'm going to need it.

Hey guys! Yesterday while driving, my car started pulling hard to the left when braking. I've pulled the wheels off and checked if the cylinders were leaking and did not see any evidence of such. So what would you guys suggest to look for next? I've had a ride before that would pull like that before but it was a newer model truck with disk brakes. My problem ended up being being a bad caliper. Can a wheel cylinder go bad the same way and not have any leakage?

Can anyone tell me where the power window relay is located? I cant seem to find it and have been looking for an hour now!!!!