1964 Cadillac with Elvis and The Beatles in Elvis CA house

I've had a read of that site before, but enjoyed reading it again, thanks Ian. It would be Too Cool for School to own an Elvis car.

Or for that matter, a famous Actor/Dignitary/Person.....

Oh well, I ended up with Jeremiah and Donna Blakley's old car, and i'm pretty damn proud to say its mine, oops, ours... :-)

I consider myself more of a custodian of the car I think. Maybe, in around 20 years or so, it will go to a new custodian and hopefully, it will still be in an unrestored condition. Lets face it, they are only original once.

A couple of Elvis' entourage had 63 convertibles and taking a glance at my Elvis stuff, there was also a red one with a white top seen below. There is of course the 1964 Series 75 what we have talked about here on the 63/64 site several times over the years. Here's a few pictures. 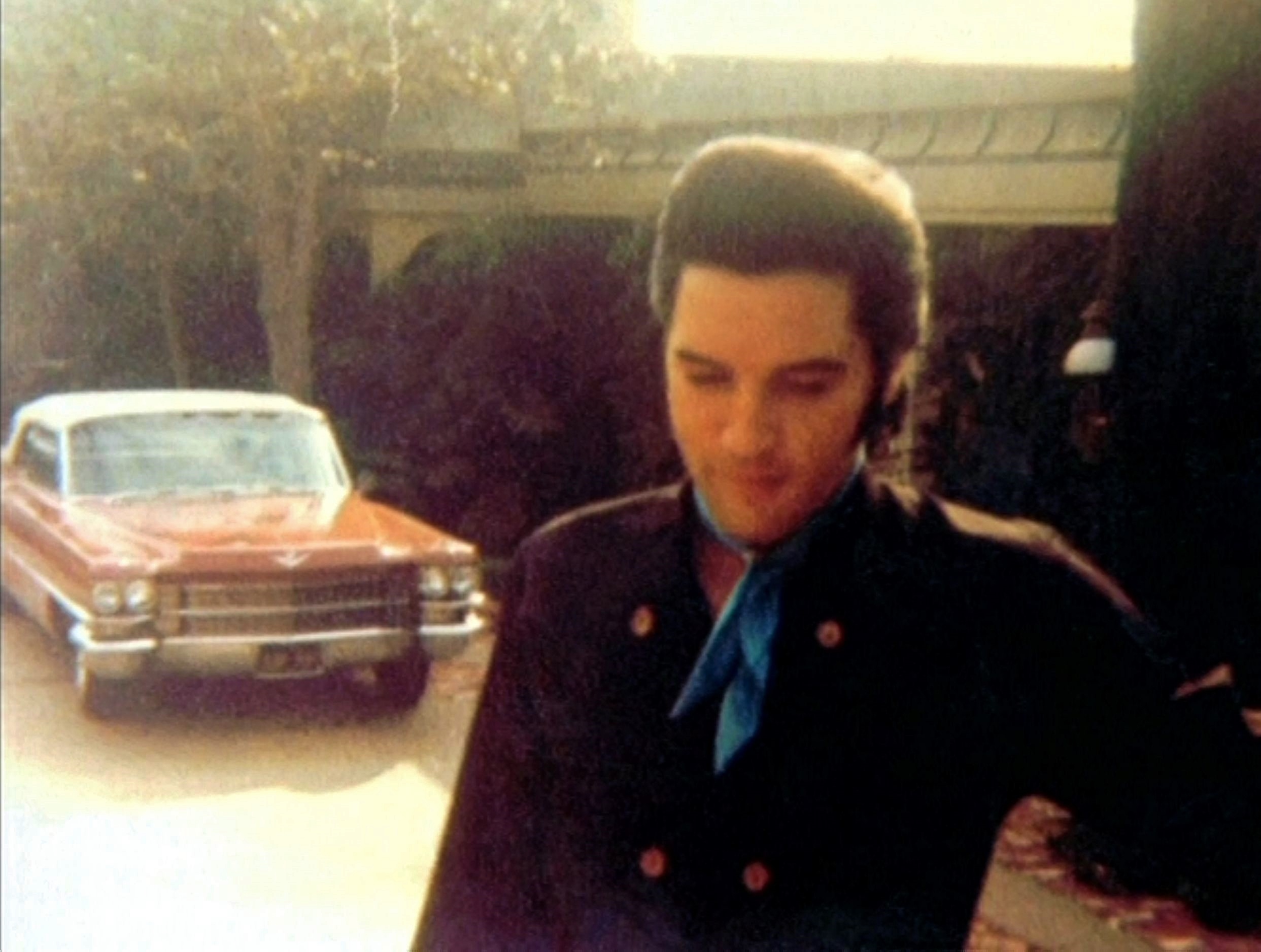 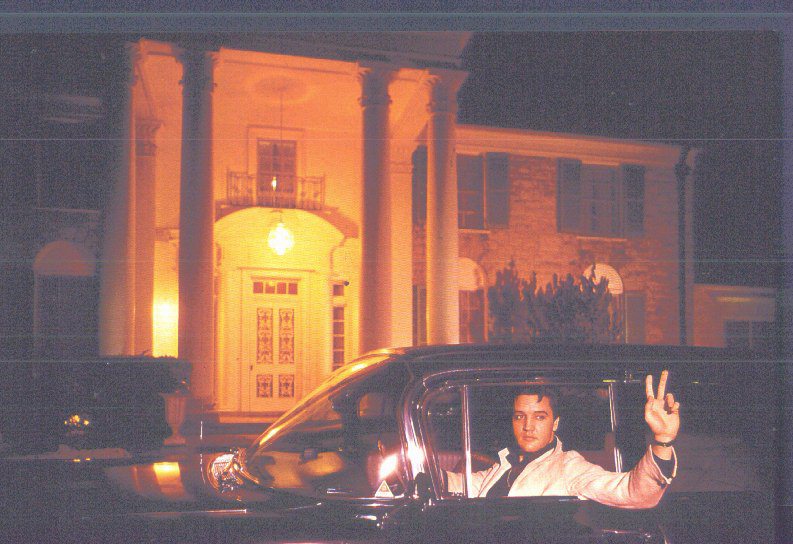 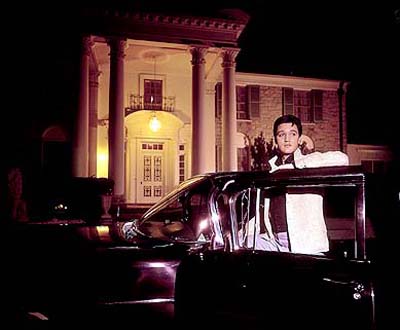 Its a shame, that the series 75 was built using the much earlier model platform.

My opinion, is the Limo's would have looked a lot more modern with the sloping A pillar, so on and so forth. For such a luxury car, it was put together using old stuff and new and blending it together. Obviously, costs to build such low numbers, would've been a major factor in doing it.....

Having said that, I would own one in a heartbeat and I did nearly buy a series 75 until I spotted the car we have now.

Just think, for the 1965 Production Model year, they didn't even adapt the current year front and rear clip to the center body section ... just continued to use the 64 body ends ... which has made liars & criers out of  (insert Carl Sagan voice here) Billions & Billions of Facebookers and malcontents, firmly and incorrectly asserting (insert Slim Picken's voice here) "What in the Wide World of Sports is a-going on here? Don't ya'll fellas know that's a 1964 Cadillac!"

I had wondered why the limos were built that way & why the 65 limo was actually a 64. Low production numbers, that's got to be it. Thanks Kevin.

I was 14 years old at a house birthday party for a girl in my class at school
Elvis had just been on the Ed Sullivan Variety Show that was the show to watch on a Sunday night on your small back and white TV with no remote ( you got up ! )
Often the family would watch it all together
Show on a Sunday night were the more entertaining variety type shows
Back to the party --for some very unknown reason-- me and three friends went into the bathroom and proceeded to comb our hair the way Elvis wore his
It was combed back on both sides and the front middle came foward
I had a curl down the middle front of mine to my great surprise
It really was our Happy Days Fonzi - in the mirror moment
When we went back into the part the ----girls went wild !!
My popularity improve amazingly
Needless to say the hair was there to stay
So for me Elvis was a life changer in more ways than one
I knew of Elvis long before many people as he came up thru country music which it just so happens my grandfather was a very big fan of at that time
He had the very first records that Elvis released--- in our home on his record player which was a part of his country and western record collection
They were the smaller 45 size records sold at that time with one song on each side
The man had a very direct positive effect on me
Both my grandfather and Elvis
My entire family Dad Mom my sister and grandparents loved Elvis his music and amazing style
That MY Elvis story --and I'am sticking to it !!
He brings back great memories of those times for me and i Love it

Beautiful story!I Love Elvis and His music .And for Him  spreading the Lord's word.He was believer.I have the book that was found under His chest in the bathroom when He died "A scientific Search for the face of Jesus".After long search I found this book on ebay.When I was 13 I saw the movie "Fun in Acapulco" in 1980 in Poland and I was hook.In school -more than 1000 kids  they know I was Elvis fan-teachers when I didn't perform well in class asked me to prepare about Elvis for the next class and my grades went up after that and I was promote to next class.Elvis - incredible-amazing story!

If interested in Elvis' spiritual side you might check into the books by Elvis' friend, spiritual mentor/colleague, Larry Geller.   His earlier book "If I Can Dream", and more recent offering "Leaves from Elvis Garden" take a deep dive into Elvis spiritual side. Most of the books, like the one mentions, were suggested by and/or provided directly by Larry, as Sonny, Red, Joe, Jerry, etc, were not as deep into the spiritual side of things as Elvis and Larry.  Back in the days as Pres of the Elvis International Fan Club, I flew out to Hollywood and did a 3 hr interview with Larry Geller. I have only posted a few snippets of that interview to YouTube and may one day post the entire 3 hrs!  That was a really interesting episode during my days running Elvis International as it involved flying to Vegas, driving out to Hollywood with Elvis Kissin' Cousin's costar "Cynthia Pepper" and other friends, meeting up with  Memphis Mafia Elvis Gal Pal Patti Parry, and doing the 3 hr interview with Larry and all on hand. Those were the days. Of course I could go on and on and on. Here's a picture of our PR VP Shelly Powers conducting the video with Larry, me with Larry, and one of me with Cynthia Pepper and Patti Parry on the Santa Monica Pier... THE END OF ROUTE 66! 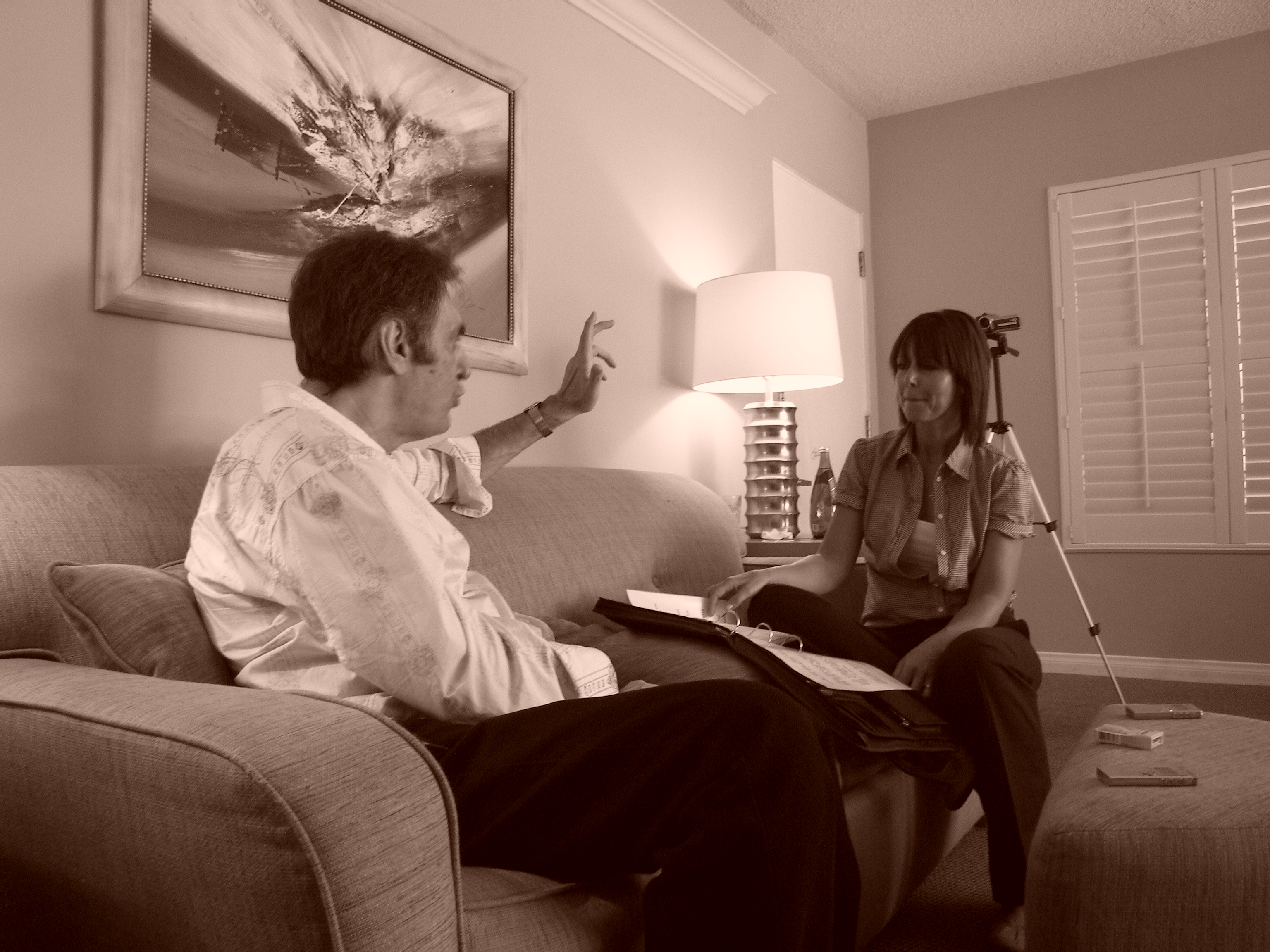 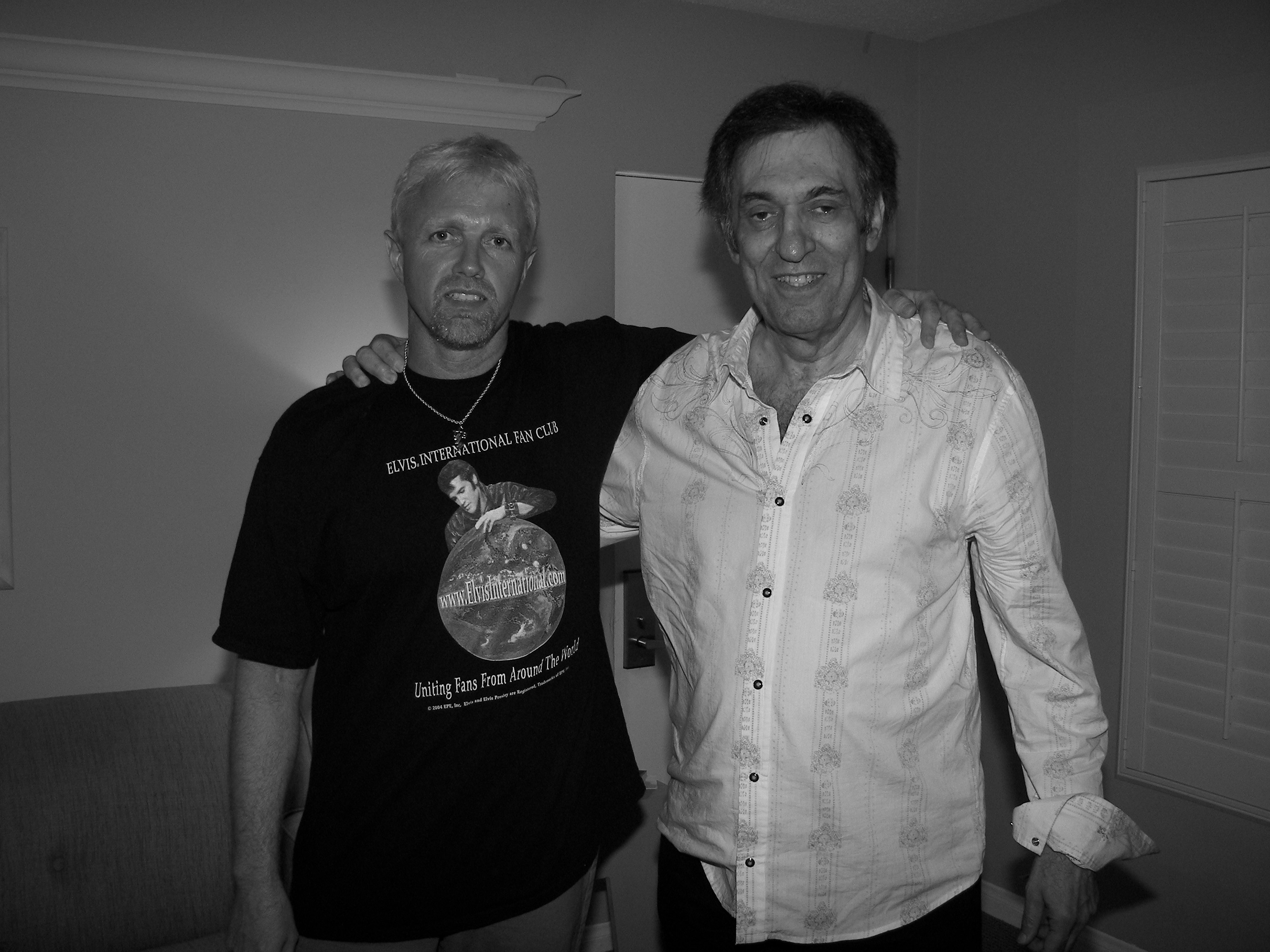 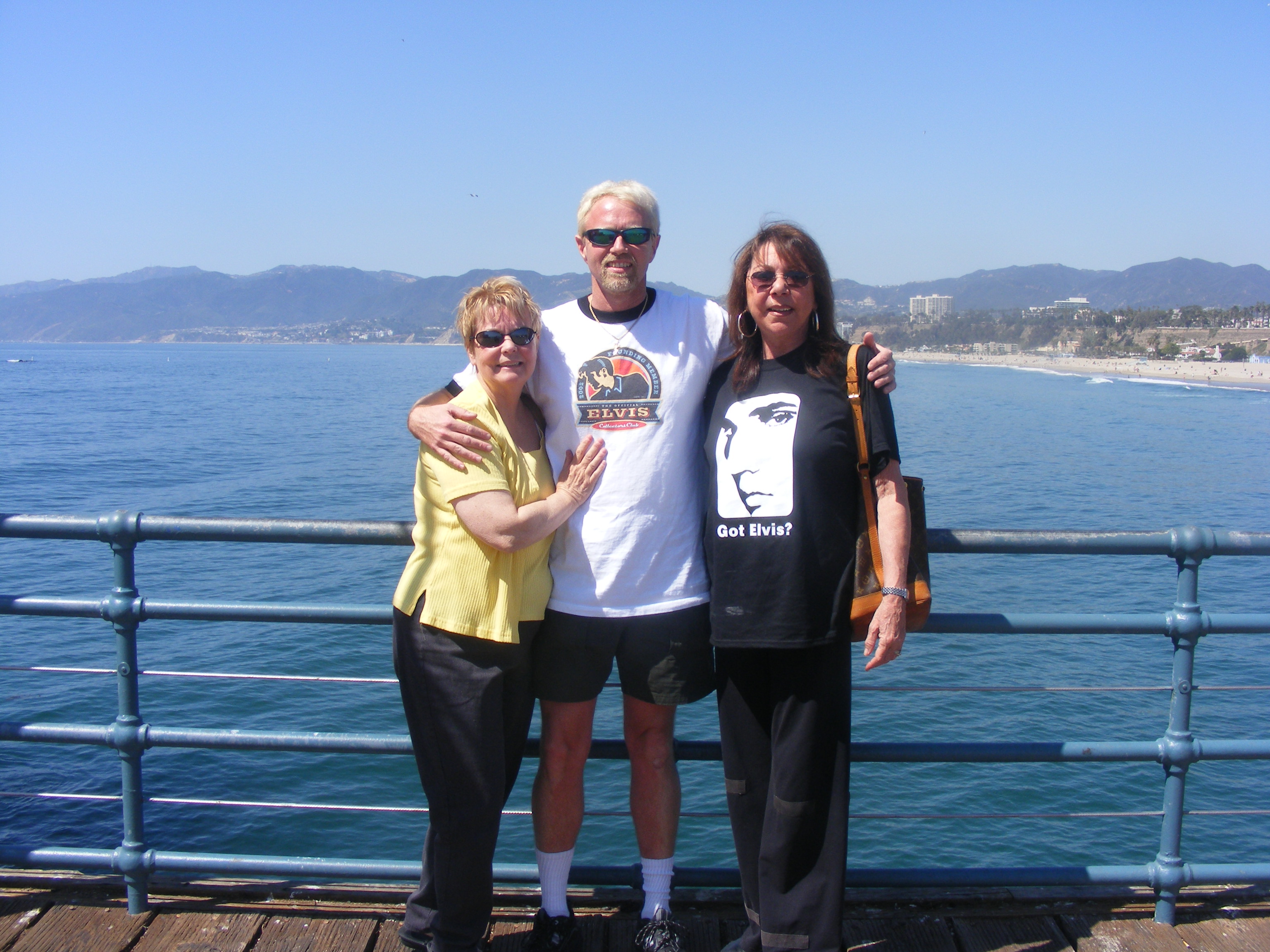 Super story!! I got pictures from DJ Fontana with Elvis dedicated to me.Two years ago Priscilla was at Westbury theater talking about Elvis for 2h we had the seats in 3 row.That how "close" to Elvis I was.Of course I went  to see Graceland Sun Studio etc.And here in NY where Elvis went Warwick Hotel Ed Sullivan theatre MSG-Till 2006 they had big -up to the celling posters of Elvis in hallway of MSG.If I would know I would take it for myself.I attached pictures of my licence plates.I will use Elvis 63 on the car when I finish restoration.Jason -please add more story about Elvis....

Neat Plates.  Of course mine on the Elvis-Scalade is pretty short and to the point. I helped write the then new DMV Registration system and always had access to the system even when I worked at DOR, and kept waiting for the owner of the plate ELVIS to lapse and finally nabbed it a few years before I retired.  In the interim I had the plates ELV!S, and ELV1S... also cool plates. 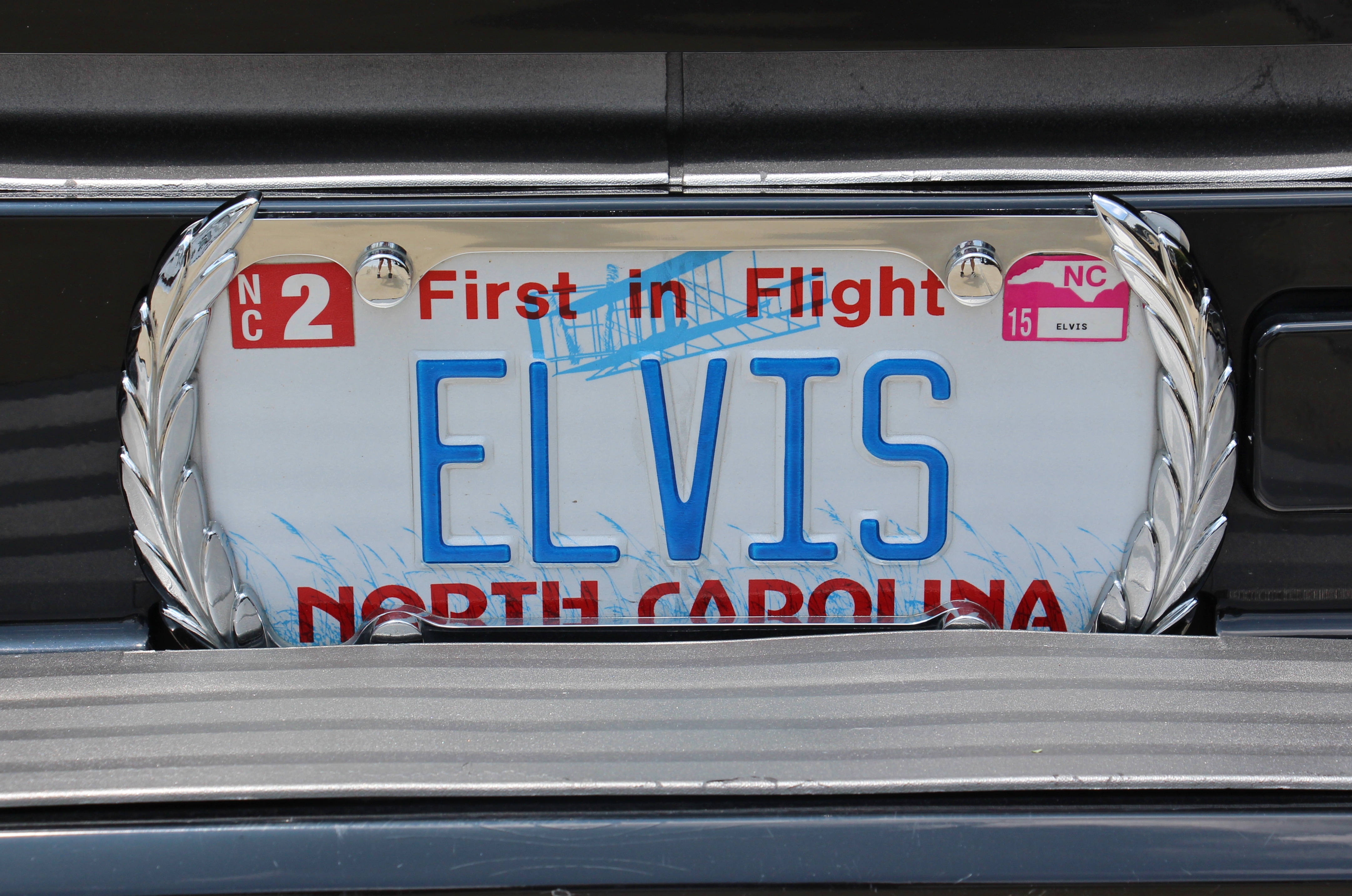 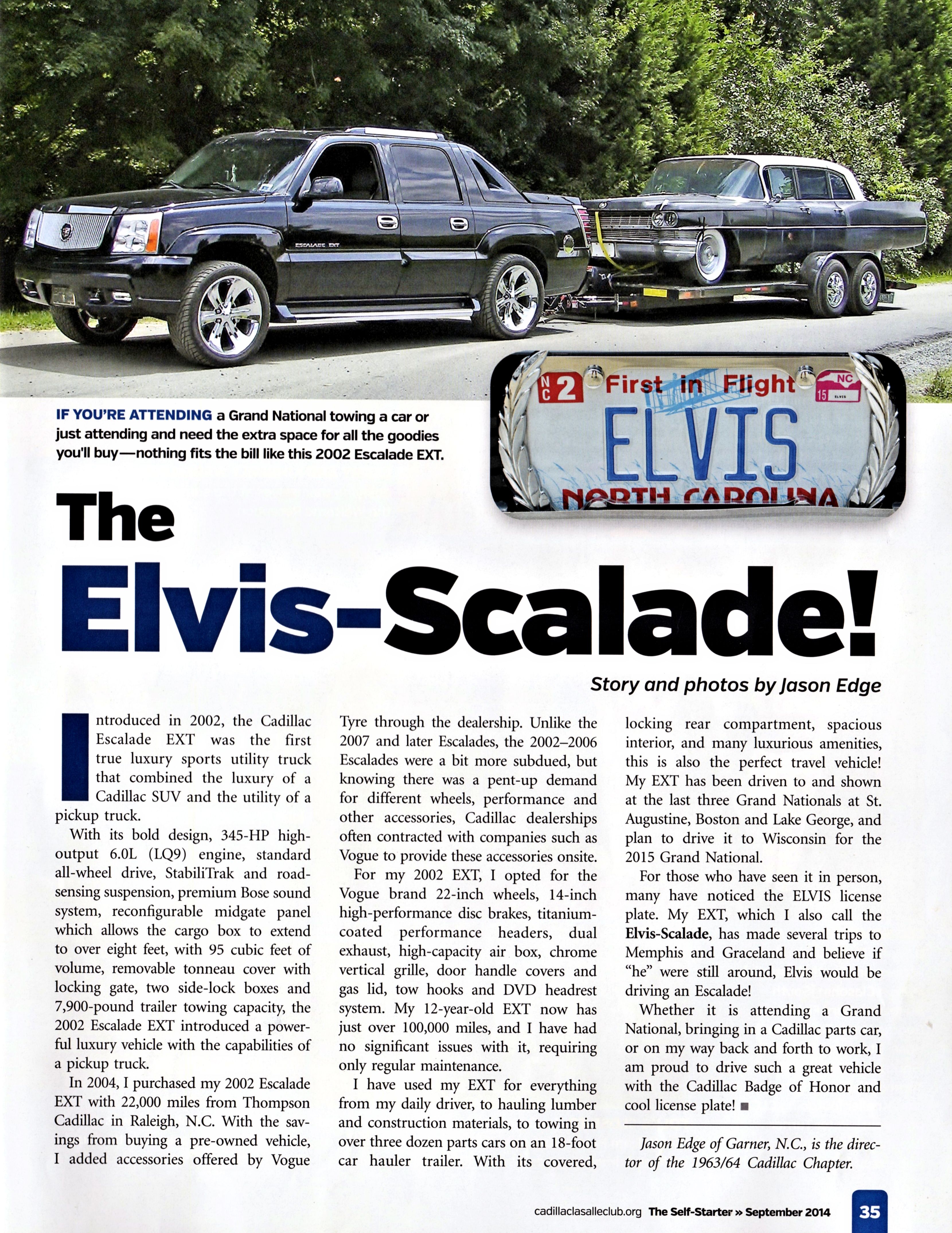 Those combinations were available at DMV in NY -others are already taken like Elvis or Elvis1.

I could of course go on and on but met Scotty Moore and DJ Fontana several times before they passed away. My funniest moment with DJ was the first time I met him. I was in Memphis for the 20th anniversary of Elvis' death in 1997, and was up on the Mezzanine level at the Peabody Hotel where they would later have a tribute concert by almost everyone that was anyone in terms of Elvis Music, and I turned a corner and ran straight into DJ Fontana. I was pretty use to bumping into co-stars and the 70's TCB band members like James Burton, Ronnie Tutt, Jerry Scheff, John Wilkinson, but this was the man, the original drummer in the 50's and on those songs like Hound Dog and Jailhouse Rock that exploded around the globe and put RNR on the map. My wife Cheryl was with me and asked her for my camera to take  a picture of me and DJ, but Cheryl said my mom had walked off with it and was taking pictures of flowers in the Peabody lobby!!! I told here FIND MOM AND GET THE CAMERA! … in no uncertain terms. It was a fun 1st meet-up and would have a chance to talk with home quite a few times, especially on the 4 Elvis Cruises we took.

The Elvis Cruises were probably the most fascinating and intimate way to meet up with Elvis friends, band members, costars, etc. I remember once I went to get ice cream at like 1am (you do that on a cruise because you can!), and ran straight into Ronnie Tutt (Elvis' 70's drummer from the TCB Band) a the ice cream machines, and got in to this long discussion about the world wide Aloha from Hawaii show and how I had sat about … oh, 1 foot from our 25" color TV when it aired in 1973, and how I always thought he was so cool.  I confided he was like my Ringo! LOL  The 8 years I ran the Elvis International Fan Club was a fascinating time, a huge part of my life, just as my association with the Cadillac and Cadillac Club have been.  Running that club taught me a lot about how the internet and technology can bridge the gap and bring people together from around the world that have a shared passion.  In essence, a Cadillac "Chapter" with potential members spread all around the globe, is extremely well suited for the internet and our virtual meet-ups here on the 63/64 Cadillac Website!