I bought my 2002 Escalade EXT Brutus in 2004 with 22K miles and have used it since for hauling dozens of 63/64 Cadillacs in from all over the East Coast. It truly has been a brute, but has 157K miles and have had to do more aggressive maintenance recently, replacing the Hydroboost brake booster system, power steering pump and hoses, plug wires, hub & bearing, steering gear, alternator, shocks/struts, window regulators, and just odds and ends that come with an older car. It has a very stout 345 hp LQ9 6.0 Liter Vortec Engine and at almost 6000 lb weight it has the ability to tow the 7500 lb weight of my car hauler and parts cars better than say a 1/2 ton pickup truck usually about 1000 lbs less curb weight!

I could name a thousand other reasons why the EXT is my vehicle of choice and perfect for me, but I will not go into that but will just say I have been looking hard for a 2013 EXT (last year built) with low miles. The 2013 has the 403 hp, 6.2 Liter L92 Vortec 6200 engine.. a true beast! Well, I found my 2013 EXT, a Xenon Blue Premium Edition, with 88K miles this past week in Houston, Texas and will be flying out Sunday, kicking the tires and signing the paperwork Monday, and making the long drive back to NC on Tuesday.. if everything goes as planned. Since I call my 2002 Brutus, I have a name for the 2013 -> "Et Tu, Brute".. or on the license plate ET2BRUTE.

So this should provide a vehicle that can pull in many more parts cars for many more years and give Brutus a rest. Brutus of course will stay in my stable of Cadillacs ... he is like an older proud racehorse that gets to go graze in the meadows at Edge Manor! 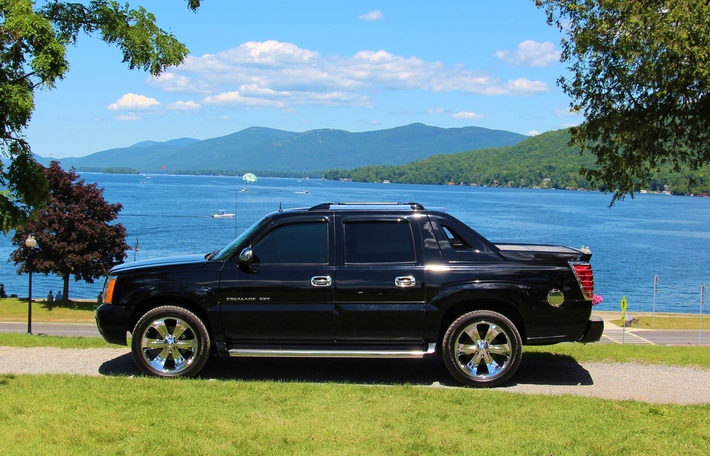 Enjoy your Escalade story and experience  with it a lot

A real work horse that has been  very good to you

Your  Cadillac ranch will enjoy the new addition

Started by Charles Fares in For Sale 8 hours ago. 0 Replies 0 Likes

Hey all, has anyone had their windshield removed and resealed successfully. I'm pretty skittish about having someone mess with my perfectly good glass knowing that these cars are a little different…Continue

Here are the 5 main things I recommend to all new 1963/64 Cadillac Owners: - Join the CLC (Cadillac & LaSalle Club).   To join go to…Continue