My new ride, and anti-theft recommendations.

After 25 years, I finally have another 1964 Cadillac de Ville Convertible!  She is en route right now and will be home in a few days.  I am so excited and I barely stand it! 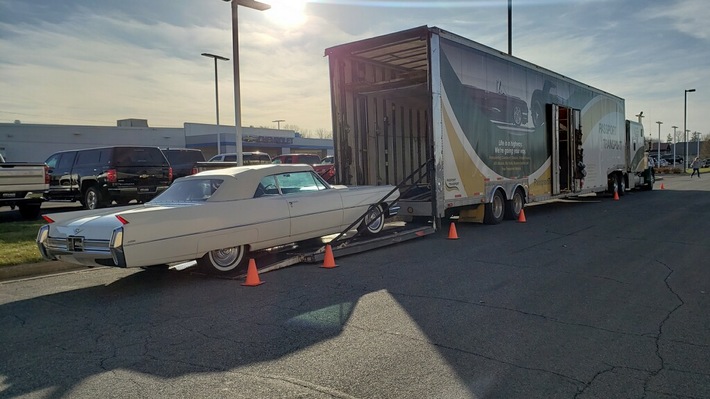 Any advice or recommendations for anti-theft devices or precautions?  (My previous '64 Conv. was stolen in the middle of the night and recovered by police the next day in Pocoima, CA completely stripped).

Anyway, I want to do what I can to prevent this one from being stolen.   Kill switch?   Hood Lock?   Car alarm?   All of the above?

Thanks for any advise you may have.

Great looking 64 convert and much good luck with her

Not much can stop a tow truck I would think

I ran a wire from the coil to distributor side to a switch and then to ground. This grounds the coil and no chance of hot wiring it.

Love the car and lots of insurance cover.

If they want it, they'll take it.

Chances of it happening twice would be slim.

Kevin,,, unles you live in cities like LA, DALLAS, etc,, being hit multiple times is a reality, not an exception,, have been broken into 3 times (damage and personal property theft every time) over 4 years and a complete truck theft.  given the interest in Law enforcment in more serious crimes.. they just dont have the time.. my truck was stolen in dallas,, and found 2 months later in a hotel parking lot.  i called the police, told them i could see kentucky fried chicken bags and cups, sunglasses, dope in a plastic bag,, all th9ings that DID NOT belong to me before i got in to the car,, i asked they ocme take fingerprints etc, because you could see the tool they usded to strip out the ingnition in my 04 diesel, so my thinking was, they have recordes somewhere on these people.  Well, they said they just didint have the time. I called he insurance company and asked them to send the police to print, he said same thing, I called police back, said, hey, come print my truck,, they said, unless the truck was used in a subsequent incident, where bodily injury occurs, they simply dont have th time to investigate a simple car theft... given that level of concern, you know damn well, the crooks know that, and they have no fear of doing it over and over again,,, Just my opinion from experience.

so if the OP does find a theft system,, let us know,, i have a viper in my truck now, but i really dont know how well they will work,, maybe on a amateur crook, but those pro operatoins problably have a hookup to shut it off..

Started by Phil in 1963/64 Cadillac Specific Discussion. Last reply by Phil 8 hours ago. 18 Replies 1 Like

Hey everyone,  how sensitive should the power brakes be?  I have just rebuilt the power booster and  replaced the master cylinder. The pedal doesn’t have any resistance so I have to be very gentle so…Continue

Hello all , just spent better part of the weekend installing a new rear main seal and pan set on my 63 390 , all though it slowed the leak down considerably , l still have a drip , l used a Felpro…Continue