So I got this project all done - only broke 2 bolts.

Got everything all buttoned up and tested it.  I have a pretty strong leak - started as a drip but as engine got hot it turned to a spray - under the left lower bolt head on the outlet pipe.  No leaks at the pump itself (yet)

Of course, its the most difficult one to get at - will have to remove alt and oil pump upper mount just to get a wrench on it.  It is leaking at the bolt head - not at the mating surface on the block.

I put blue goo on the bolt (maybe not enough).  The OEM bolt was deteriorated so I used a flat and a lock washer under the head of a new bolt.

Any ideas on how to fix this ONCE - I don't want to take this apart any more than I have to.

Also, I used Russ's Double O-Ring / washer trick to be sure it seals at the top of the pump.  That seems to put my belt in a mis-alignment as it is now on an angle.  Would I shim the Alt to compensate?

Thanks, as always, for any input 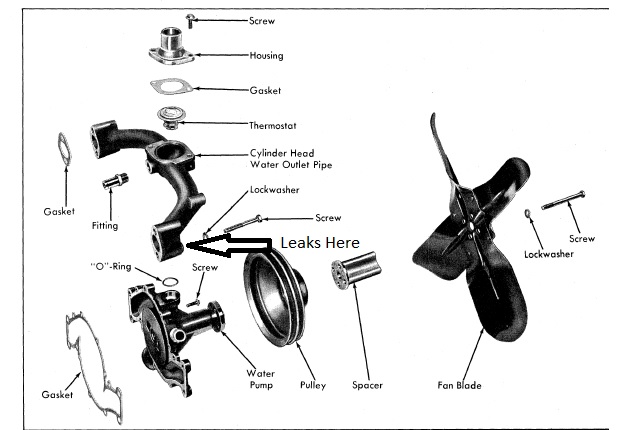 Thanks for the reply, Russ! You are one helpful Cadillac fan!

I got it sorted out around midnight.  Ran it for a while with the cap off the Rad to 'burp' it.  Seems to have worked.  The gauge worked after a 'gentile' 3 finger tap.  As you well know, I just LOVE my gauges.

Gonna put some miles on today just to use some gas.  Then it's back to the fuel gauge issue.  Drop the tank, R&R the sender, cross fingers that the gas gauge reads correctly after this attempt.

Thanks again for your generosity!

The hose routing looks correct.  You probably have an air bubble, or an unhooked sending unit. The temp sending unit is on the left head, next to the distributor.

This is how I put them back - is that correct?  The upper hose is the one that runs along the valve cover.

Now that the engine has cooled I'm gonna pull my thermostat ans see if I put too much RTV on the inlet pipe nipple - maybe I blocked the passage?

Why won't my gauge read??

So frustrating - haven't been able to drive the car for 2 weeks. 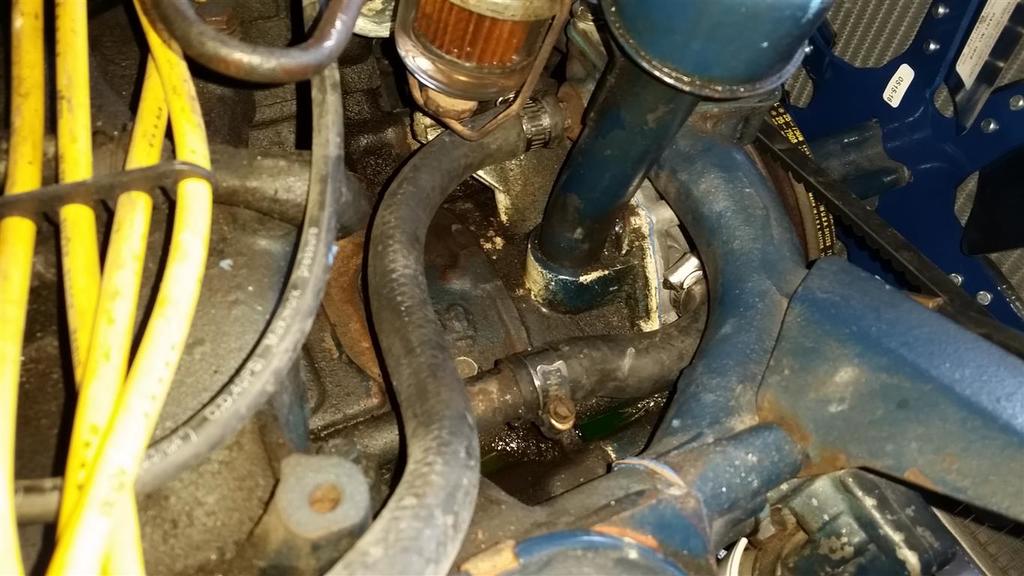 Well, Its finally back together with no leaks. BUT, (there's always a 'but)

My temp gauge doesn't read at all!  and the motor seems to running very hot.  I might have the small hoses from the water pump to engine crossed up?  I can't find a clear pic in the service manual of the routing.  Does the hose that runs along the Pass side valve cover connect to the fitting on the back of the WP or the angled one on the side?  could that be cause?

I cannot find the Temp Sender on the engine - where is it?  Oil pressure is dead center behind intake manifold but I'll be damned if I can find the temp unit - maybe a wire got messed up when the fan blade broke?

"best i can figure gasket got pinched?"

I think this is the case - After I took it all apart the gasket was, pretty much, not there.  The 'kit' gaskets are very thin and crappy.  I made 2 new ones and put it all back.  Not going to test it till tomorrow - after it sets up,

Seriously, I need a new hobby.  Once I get this put to bed I still gotta work on my fuel gauge / sending unit  that Russ has been  SOOOO helpful with.  If the WP doesn't leak then I'll go to the other end and work even harder.

When I was in College I was lucky enough to become a 'Certified Frisbee Master' - I might re-think this car building stuff.......

"but once you torque it down, and it is flat up against the front of the cylinder heads, it should be correct position regardless."

That's  what I thought too but my alt is WAY out of alignment after the WP swap.  I guess I'll have to look at some other areas that could cause the issue

I WILL be getting that LocTite product as well

With a good cylinder head outlet pipe nipple, and one O ring pressed into the water pump cavity first, per shop manual, I have never had these leak at the top. With that said pressing two O rings should have zero affect on alignment as nipple will press down and press the rubber outward. It might be tougher to get the outlet pipe lined up but once you torque it down, and it is flat up against the front of the cylinder heads, it should be correct position regardless.

You want to make sure the mating surfaces are of course flat and clean, gaskets are properly placed, and thread the bolts with something like you see below that I used with my engine rebuild in 2012: Mike, mine did the the same thing only on the easy side best i can figure gasket got pinched? fixed bottom bolt by filling hole 1/2 full of permatex right stuff  that forced it where it needed to be. then  a/f. found its way out top bolt repeated this again so far over 1000 mi. no leaks good luck!

I took Left side bolts out (after removing Alt and Oil Filter)  The lower one is still draining - it must go into the coolant passage.  After its done I'll try to seal the threads.  I'll have to remove the other side too in order to get it off and put RTV in the threads - they are pretty deep in the flange.

The washer is done according to your directions - I think the 2nd O-Ring makes the whole seal area too tall and that puts the mounting flange out of 'square'.  It was very difficult to line up the bolt holes for the alt and where the center facing hole is.

Thanks for the reply

Mike, just remove the bolt and put some more RTV on the threads of the bolt.

Can you take a pic of the area where the washer is.