By way of background: The car, a '64 Eldorado has very limited use. It was at a restoration shop for 15 months until last January-  that supposedly did a bunch of wiring repairs including rebuilding the gas gauge that still hasn't worked properly, and the clock that hasn't worked, and re-soldering the broken wires in the drive door. All window and seat controls appear to be working properly as well as the auto headlight dimmer.

Here are the two problems:

Thanks and best regards,

You can always drop the pan if needed later

Thanks for the helpful comments.  Look like we are in for an oil pan drop and a front cover disassembly at minimum.

In 2010, my friend Bill Gonzalez (of Tilden Auto Repair in Mineola NY) and I pulled the engine and did a top rebuild along with installing a pair of rebuilt heads I purchased from Jason.  The job was successful and we cleaned and replaced everything internally and rebuilt the oil pump with new valve and spring, etc.  The only problem was the No. 1 Cylinder oil ring gave way with the pressure of new heads, pumping a quart or so every hour.  However with the fouled plug cleaned off it ran like a champ.

So, off to a local engine shop for disassembly, new pistons, rings, bearings and reassembly.  The shop there was incompetent in that they got a running car and gave me back a back-firing, muffler-exploding, sputtering, stalling and getting stuck mess.  8 weeks later we found the ignition wires from the dash to engine were not plugged all the way into each other causing this terrible problem.  Also the exhaust and hangers were all messed up.

In August 2017 the car went into a resto shop for interior redo, paint polish and miscellaneous other work  for 15 months.

I don't think there are more than 1000 or so miles on the rebuilt engine.

A spun bearing is a screeching and or a knocking sound

Jeff, The two main causes of sudden low oil pressure is a stuck oil pressure regulator valve in the oil pump or clogged (or blocked in Kim's case) oil intake strainer screen, both often can occur after recent engine work.

On the oil pressure regulator valve, it is designed to open when oil pressure reaches 30 to 35 psi. If there is debris, etc. inside the channel when it opens it can stick open causing you to suddenly lose oil pressure.  If this oil pump has been recently disassembled that is the likely cause. If it is not completely free to slide up and down the housing inside the cavity, it may stick in the open bypass position. I have seen this on several member cars including one that showed up at a Grand National and their engine suddenly started ticking and low oil light came one. The spring should measure 2.77 to 2.89 when removed. You can check the length but in my experience issues have been with the valve sticking.  When, I have a front engine cleaned I always go back and make sure any debris has been removed from the cavity and the valve freely slides back and forth.  I've known high dollar "pro shops" to ignore this attention to detail causing the stuck valve.  I have posted a picture of the valve and spring below.

If the inlet screen at bottom of oil pan clogs that will cause this situation. 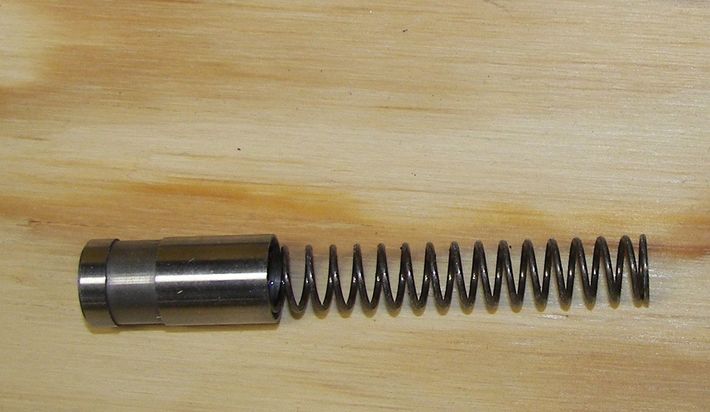 The electrical problem;  Does the car have the Twilight Sentinel system?  That may be the lights staying on.    The Gen light is an alternator I think. take it off and have it tested.

Brought the car home, shut off for dinner time, went to start it 2 hours later - temp outside dropped to 45F.  First strange sound then a knocking sound with oil light staying on.

I would say either a lifter without oil or worse a spun bearing.  This is not good.  So I moved it a few feet up the driveway and left it outside overnight.

Hopefully tomorrow, I will get it flat bedded to the shop that rebuilt the engine in 2016- Engine House in Farmingdale NY ( NOT Recommended)  to see if the oil pump failed- or to another shop that can diagnose the problem  Either way, it looks like my brand new engine is in for a serious and expensive round.

Funny thing, this started this morning and I attributed it to a too slow idle in the slightly colder temperature we had today. About two weeks ago it was a quart low, and I added a quart and it seemed quiet and happy. Today after start and warm up I drove 35 miiles on the expressway at high speed 65-80 mph and the car seemed fine. Same on the trip back as far as I could tell.

Your idle is to —low now

That should take care of your red  oil light issue

Your  first issue SB your voltage regulator not working correctly

That should address the red Gen issue light

Started by Michael Francioni in Wanted to Buy 2 hours ago. 0 Replies 0 Likes

Must be in good condition for show car or open to a good donor for rechoming but must be pit free. send info to sanremo120@msn.com along with pictures. Thanks...…...Continue

Mayday mayday or is it May day?

Started by Anders in Trivia. Last reply by Anders 13 hours ago. 2 Replies 0 Likes