This is the future, circa 1959, from the fruitful mind of Harley Earl, the style and technology tour de force, Cadillac Cyclone.

was the last dream car created during Harley Earl's time as Vice President of Design at General Motors. The advanced technologies used in the hypercar were truly amazing. To the degree that big companies such as Audi, Tesla, and Mercedes are utilizing it now.

The Cyclone Concept was created to explore both aesthetic and technological ideas. A clear plastic cover fits snugly against the panoramic glass for a complete 360-degree view in the 2-passenger version. Most people have little knowledge about the car and are unable to accurately recognize it unless they are true automotive experts. However, it remains an interesting vehicle to have been constructed at the time, with some of its features appearing far-fetched now being used as standard equipment, although not in the same way as the Cyclone.

The Engine And Features Of The Cadillac Cyclone The Cadillac cyclone is powered by a 390 cubic inch two-cylinder V8 engine with a displacement of about 6380cc that generates 325 horsepower and 588 Nm of torque. The top speed of the car is estimated to be around 110 miles per hour (176 kph). The engine is equipped with a low-profile carburetor, a cross-flow aluminum radiator, and two fans. The vehicle had a front air suspension with the rear suspension consisting of swing axles and trailing arms. The vehicle also supports a 3-speed Automatic transmission with a wheelbase of 104 inches. The automobile weighs 2100 kilos (4630 lbs). Design Of The Cadillac Cyclone 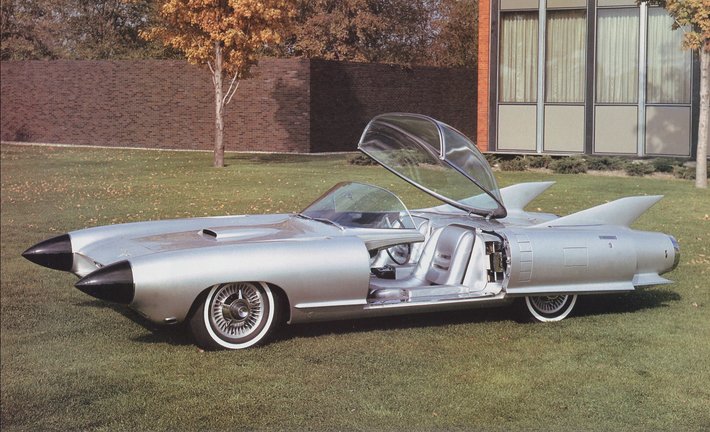 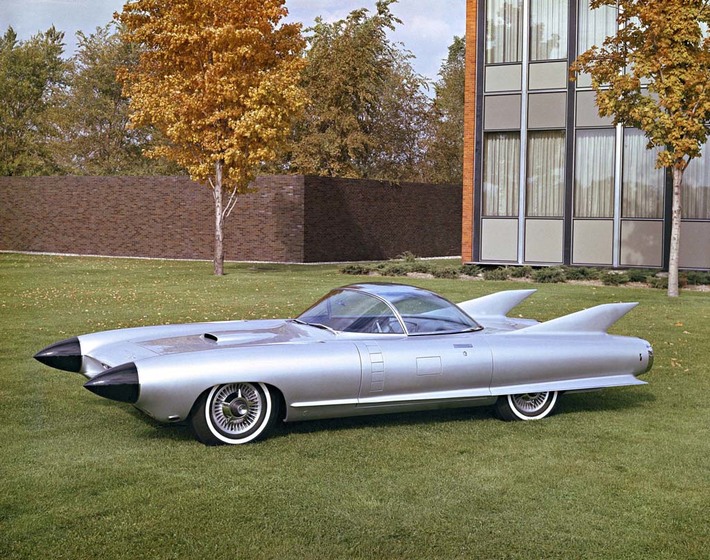 The design of the Cyclone was heavily influenced by the aviation and rocket designs of the 1950s, yet remained unmistakably a Cadillac. It served as a testbed for futuristic styling and technology.

The Cyclone is 197' long and 44' tall, built on a 104' chassis; the body is steel (not fiberglass, like other previous experimental variants); and power is provided by a conventional 325 HP engine with a low-profile carburetor, a cross-flow aluminum radiator, and two fans.

The whole exhaust system is contained in the engine compartment, including the muffler, with exhaust outlets located just in front of the front wheels. All of the equipment was in front of the engine, separated by belts. The Cadillac Cyclone was the first vehicle to use Saginaw rotary valve power steering and power brakes with a pressure servo and a reserve tank.

A bubble top canopy was supported by the vehicle. It's a fully convertible car with rain-detecting automated sensors. When it rains, the car's roof (canopy) automatically closes. Silver is used to coat the canopy to protect it from UV rays.

This vehicle had motorized doors that glided rearward when opened. The canopy also rises automatically with the opening of the door. It also offered a 360-degree view from within the car. The canopy may also be stored in the boot/trunk of the vehicle.

The canopy was coated with vaporized silver to reflect the sun's rays, keeping the inside cool and not turning into a greenhouse due to all that glass; that type of idea during the 1958-59 period is pretty amazing.
Like
2 members like this

Hi Jason
owned by GM Heritage Center
noticed its now at Detroit Institute of Art till June of 2022
in the comments of this video.above

The Cyclone had these rocket-like black cones in the place where most cars had a spotlight. Surprisingly, they weren't just for show; they served a real purpose, which no one needed back then but is today quite common, although not as ostentatiously placed or exhibited.

But it was the two black spots on the front fenders of the automobile, which contained the radars that were supposed to scan the roadways in front of the car, that made this car stand out. It would notify the driver electronically if there were any disruptions that may lead to an accident.

The distance between the vehicle and the object is then calculated and shown on the meter. If a truck is 100 yards ahead of the automobile, for example, the car's warning system will sound. As the car approaches, the alarm will get louder. This radar-based technology is also found in luxury vehicles like Tesla, Mercedes-Benz, BMW, Volvo, etc.
Is The Cadillac Cyclone Available Today?

The Cyclone was a prototype that never made it into production, but that was alright since Earl was using it to squeeze as much new technology into a vehicle as possible in order to push the boundaries of what had previously been considered the car.

It made its debut in the 1959 Daytona 500 and became a key part of GM's Motorama. The vehicle's tail fins were gradually reduced in size to keep it looking as similar to Caddy's design as possible.

It remained on display in the GM Heritage Museum for a long time after that, although it was often taken out for parades, car events and leased to other museums as part of exchange programs.

The vehicle has also been featured in the famous video game The Crew 2. It made its first appearance in The Crew 2, where the car was added to the game post-launch on April 21, 2021.

The Cadillac Cyclone was truly a unique car. Harley Earl dared to make his vehicle different, and the results were worth it. The car had sci-fi and futuristic features, and it’s unfortunate that it never went into mass production. Very cool, indeed.  If this is the original concept car and not a repro I guess I am a bit surprised it is just stuck out there on a grassy field with everyone just wondering around ... even if this is a one off show and not a routine showing. I would class this car up there with Elvis' Pink 1955 Fleetwood (well almost!), which stays roped off in an climate controlled museum.  Well that did park it in front of Graceland, but on pavement, when the US President and Premier of Japan visited Graceland some years back.

what could be causing this noise ?

Hi, everyone     I installed the all self renovated Neutral Safety switch , and i started it. I noticed the car had a much more rough start then before. it warmed up half way, then I proceed to test…Continue

Gentlemen,How do I fix this (without inadvertently setting the car on fire)?…Continue