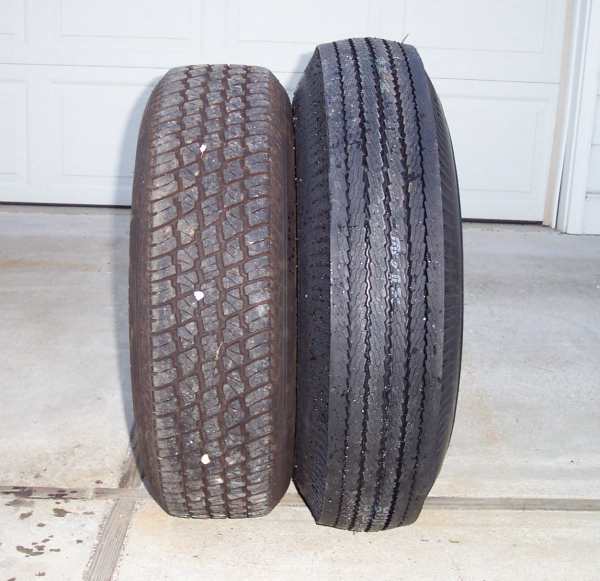 The Original Tires & Rims for 1963/64
Below is all of the information I have accumulated over the years regarding tires used, whitewall width, rims, etc.  Source of information includes the Dealer Data Book, Shop Manual, Specification Manual,  Owner’s Manual, and 1st hand experience in bringing around 50 1963/64 parts cars over the past 2 decades. 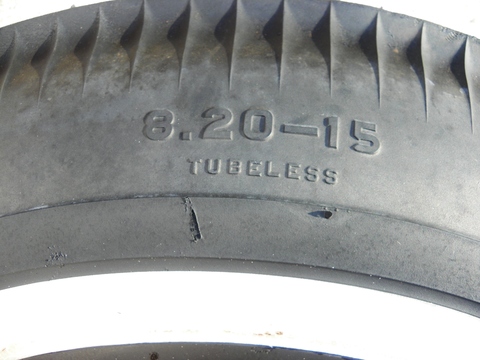 Blackwall vs Whitewall
NOTE: Blackwalls are standard on all body styles except the 6367 Eldorado, however, the majority of 63 & 64 Cadillacs were delivered to the customers with the whitewalls since they were part of the common option groups A, A2, B, B2 in 1963, and 1,2,3,4 in 1964. 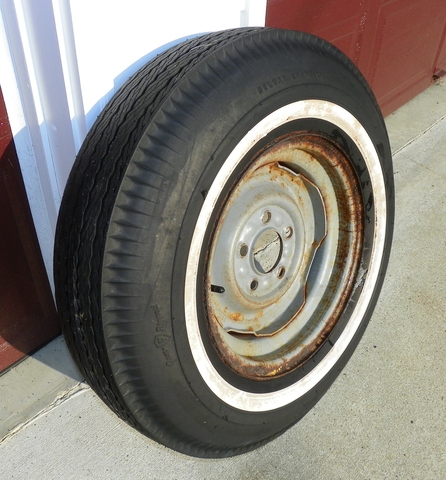 Rims Used:
15" x 6" rim with a 5x5 bolt pattern (5 bolts with 5" bolt circle diameter), painted light dove grey. Rims used on 75 series and commercial chassis cars are the same as those used on 60 and 62 series cars except they are riveted together and are of heavier stock thickness. They are painted light "dove" grey with a daub of black paint around the small mounting hole on the spider section of the wheel. 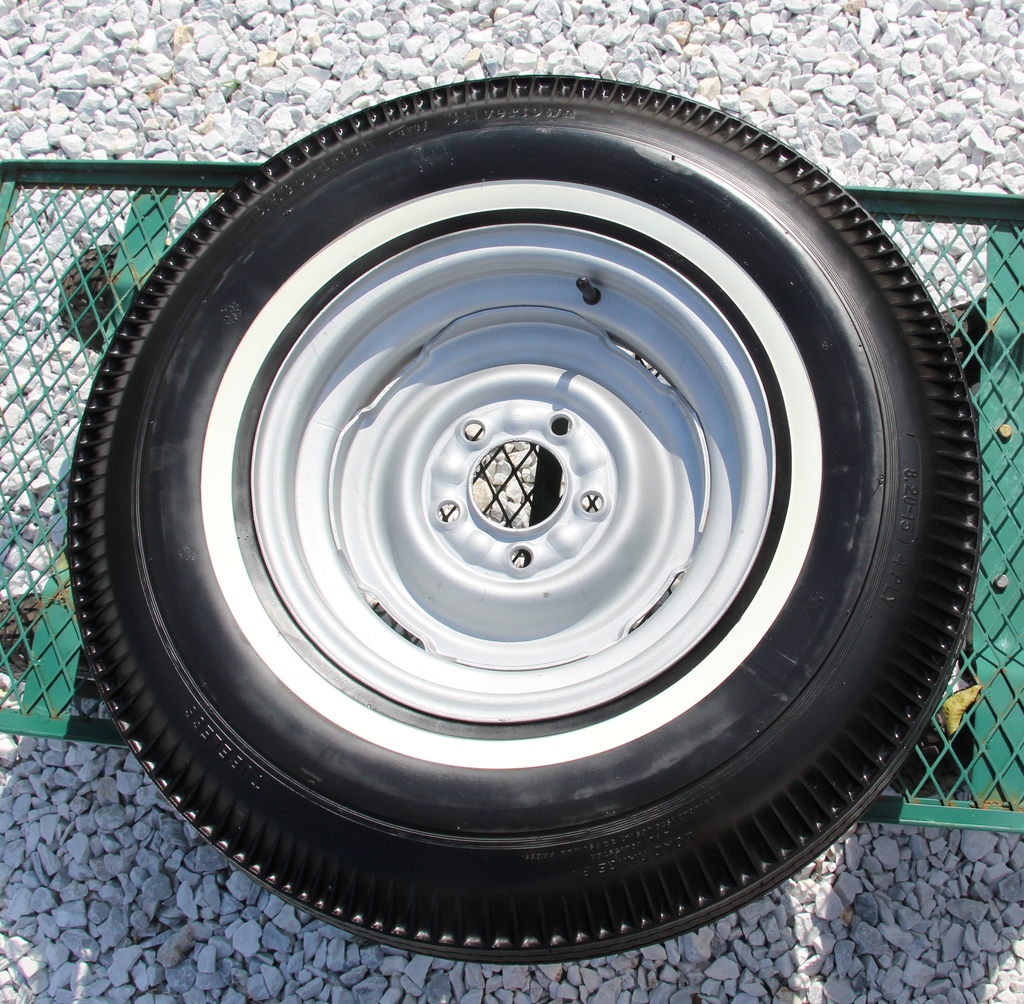 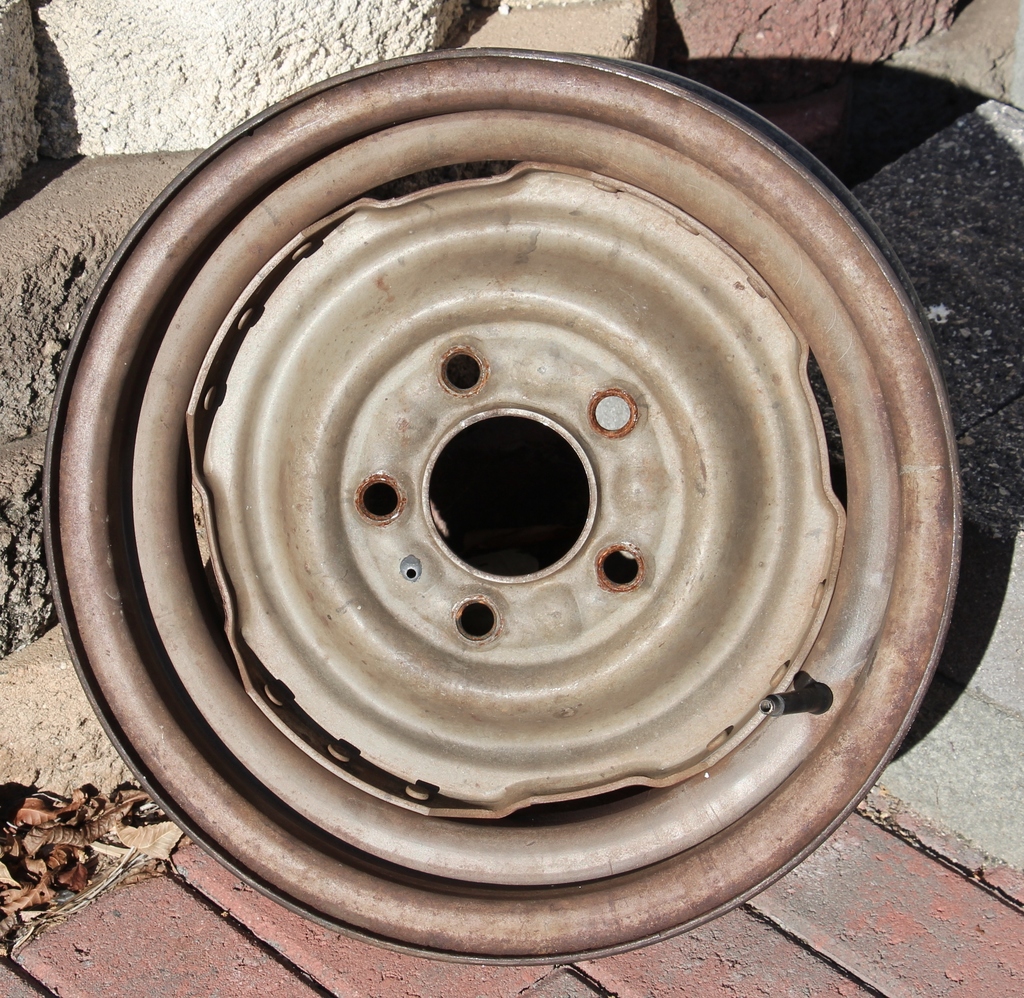 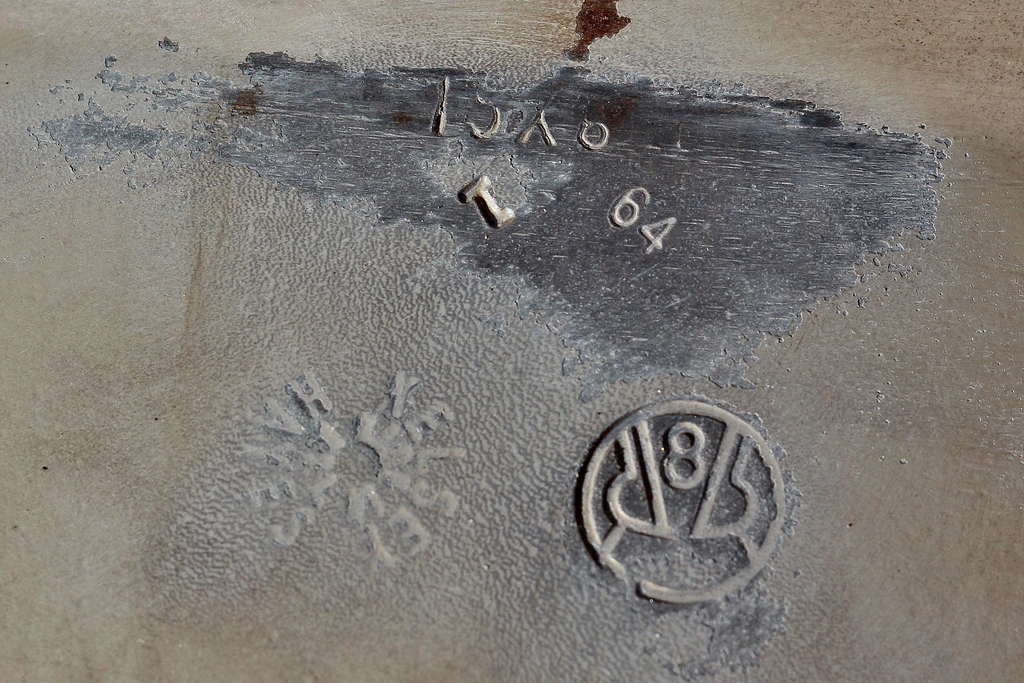 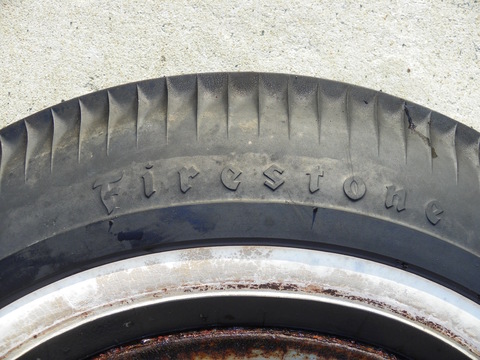 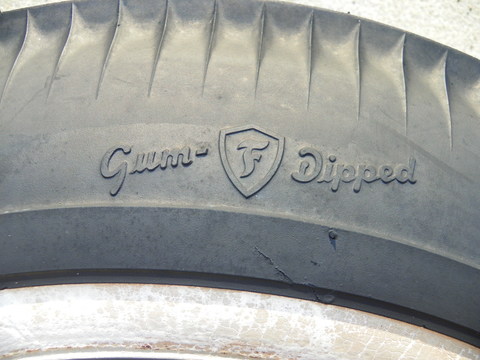 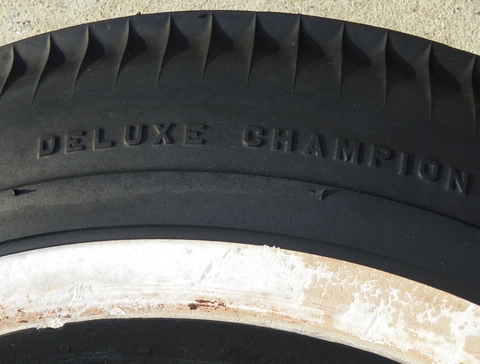 In pictures - Note “Pie Crust” shoulder. This is typical of Bias Ply tires and a sought after look for those looking to restore to original.

Whitewall Width
Some original literature shows 1963 Cadillacs with whitewalls that appear to be up to 1 1/2" although they also show whitewalls that are clearly 1" to 1.25" in other pictures. From my experience the 1963's tended to be about 1.25" or even a bit wider...maybe up to 1.5". The 64's tended to be more along the lines of 1" to 1.25". The width and distance from rim probably varied a bit between all four tire manufacturers as can be seen between our Firestone and US Royal examples below. You also have to consider there was probably old stock with the 1.5" tires around that were used on the 64's and later. 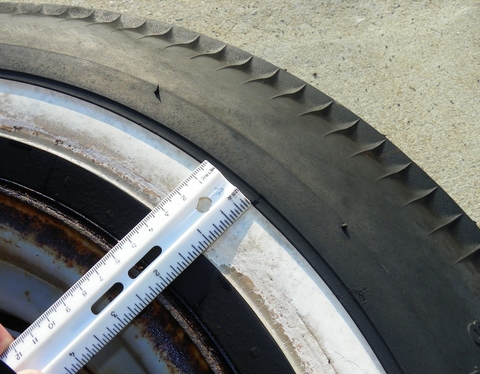 Original Example Firestone:
A couple of parts cars I have brought in had original 8.2 x 15" Firestone Deluxe Champion spare tires. As seen in picture above the whitewall width is 1.25" and starts about 3/4" off the rim. 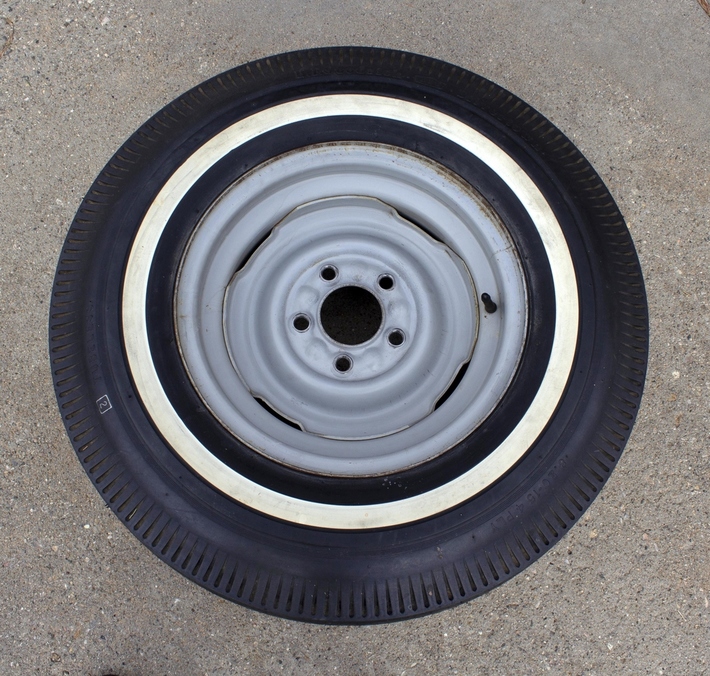 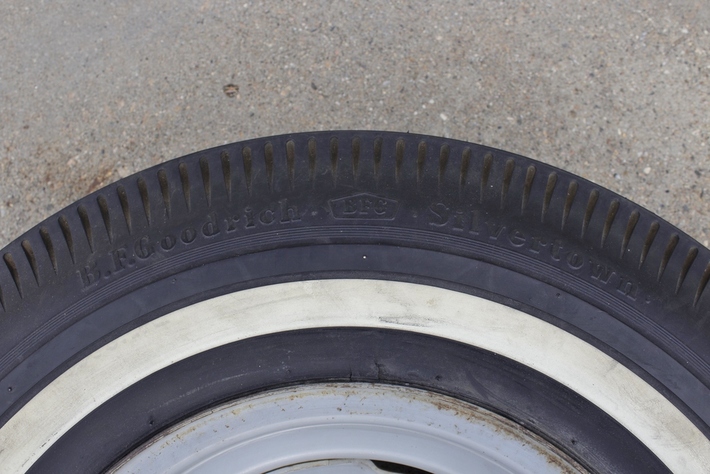 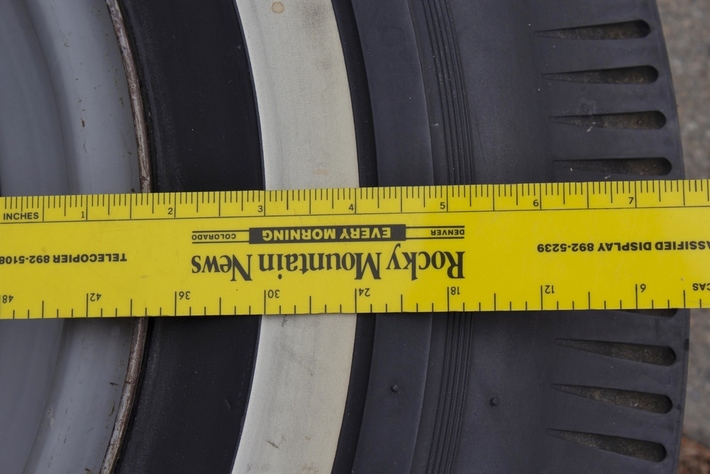 What Is the Closest Radial Tire Size?
Many 1963 & 1964 Cadillac owners understandably opt for the road-hugging performance of the radials, so the question comes up "what is the closest radial tire size to the 8.2 x 15 bias ply?" Most agree that the 235/75R15 Radial is closest in size although it is a shorter and fatter tire as you see in the picture at top of this article. This is why the 235 will not fit over the rear end trunk hump storage compartment for the 4 window sedans and hard top coupes that stored their spare tire in that area. If they made such an animal something like a 225/85/15 would be closer to the original dimensions.


Wide Whitewalls on a Radial
Coker Tire, Diamondback Tire, and others make a 235/75/15 radial with the wide whitewalls for those that want the ride of a radial and the retro look of the older tires.

Going after the Original Look
If you are shooting for the original look anywhere from 1" to 1.5" is probably ok. Anything over 1.5" is definitely not the original equipment for 1963 & 1964. Conversely, these cars also never came with the smaller ¾" whitewalls that are sometimes available and were so popular into the 1980’s.

Staying Original
The closest I have found to the original tires has been the BF Goodrich 8.2 x 15 4-ply Silvertowns with the 1" whitewall offered by Coker. For my 64 Coupe DeVille pictured below I am after an original "tall" look and have had excellent driving experience for 20+ years with these tires. No, they don’t give you the "road hugging" performance of the radials, but they are perfect for what I am after. 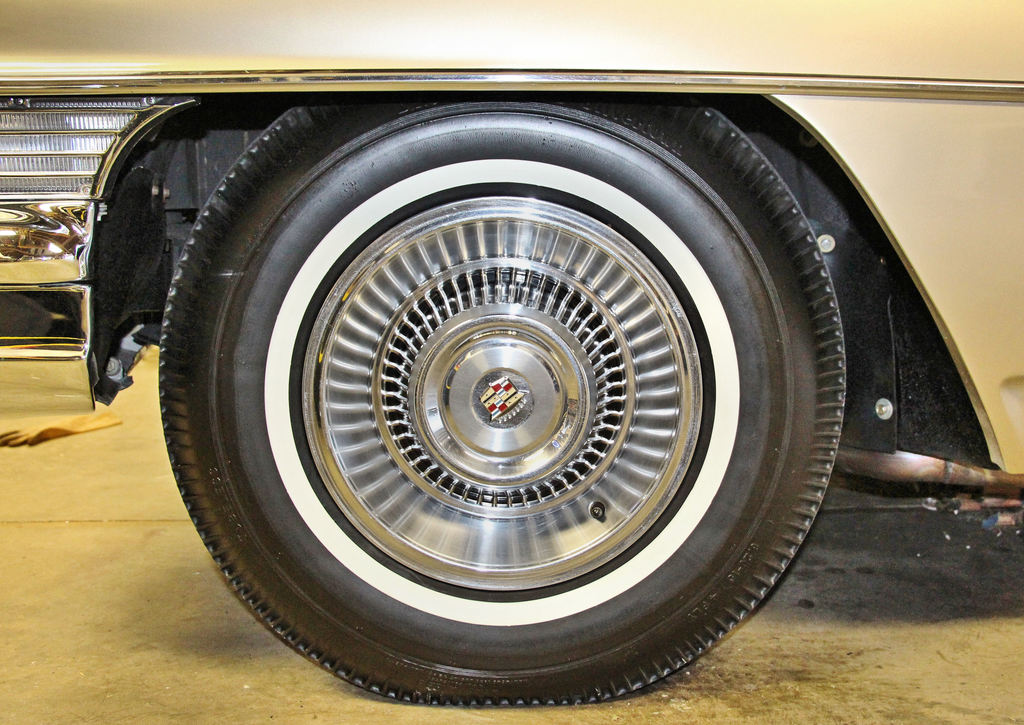 I have added the excellent original BF Goodrich examples that were provided by Tim Coy from his original spare to our Original Tires & Rims help page. I had included this in the March 2019 newsletter but forgot to update this page.

Comment by Tony and Ginny 429 on December 29, 2018 at 7:55pm
63-64 years were -- some the very first years to offer the thinner WW tire look from GM
Prior to the early 60's all white wall had a larger white area as part of the tires look
So the thinner white wall was a major tire fassion statement for its time slot and very represenative of that time in General Motors automotive history for that reason

I received some excellent pictures of an original BF Goodrich bias ply tire today from Tim Coy, and will include that here on our Help Page and in a future newsletter. As expected, the ww is further off the rim from the repros, and the pie crust was surprisingly different. 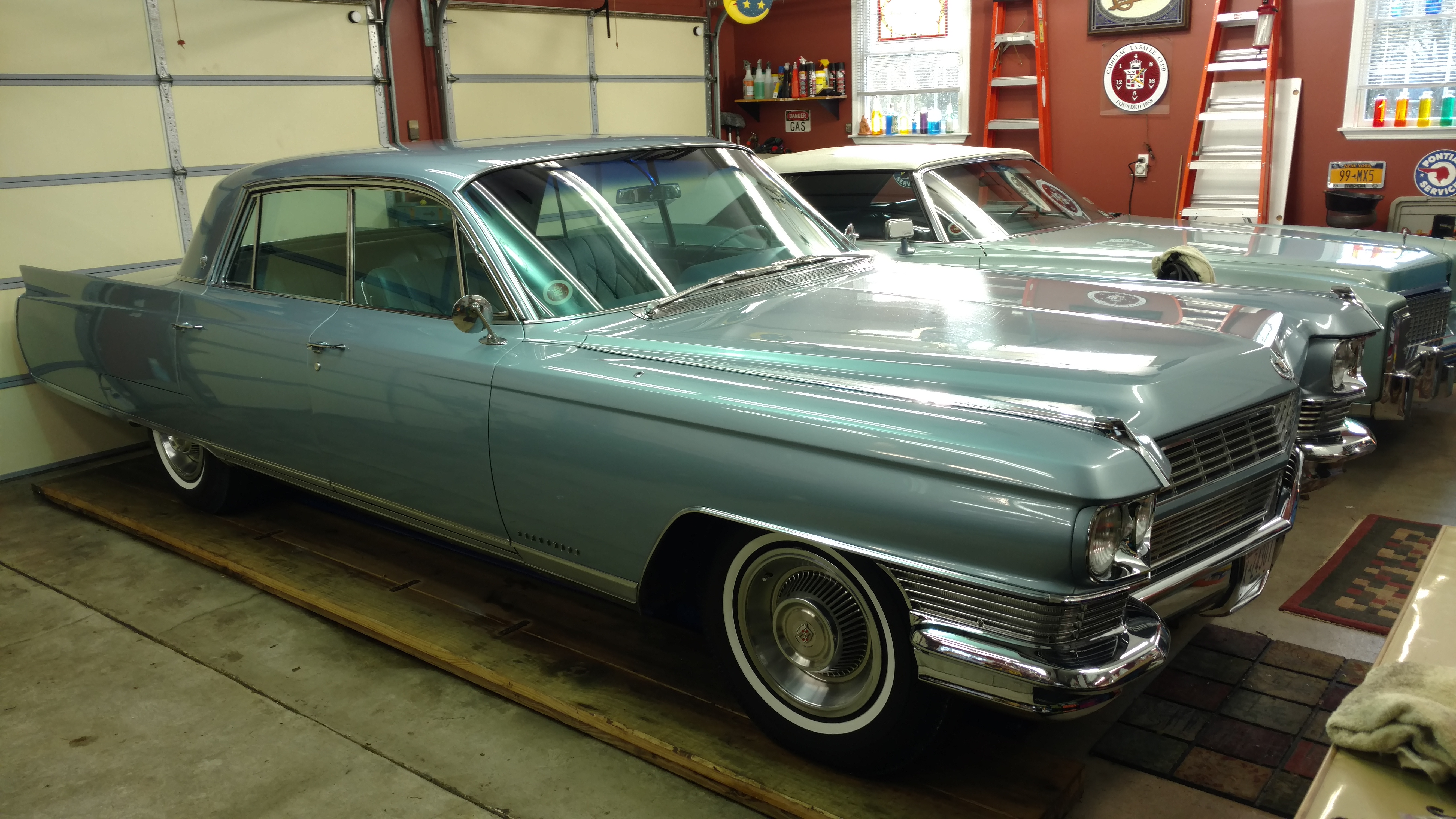 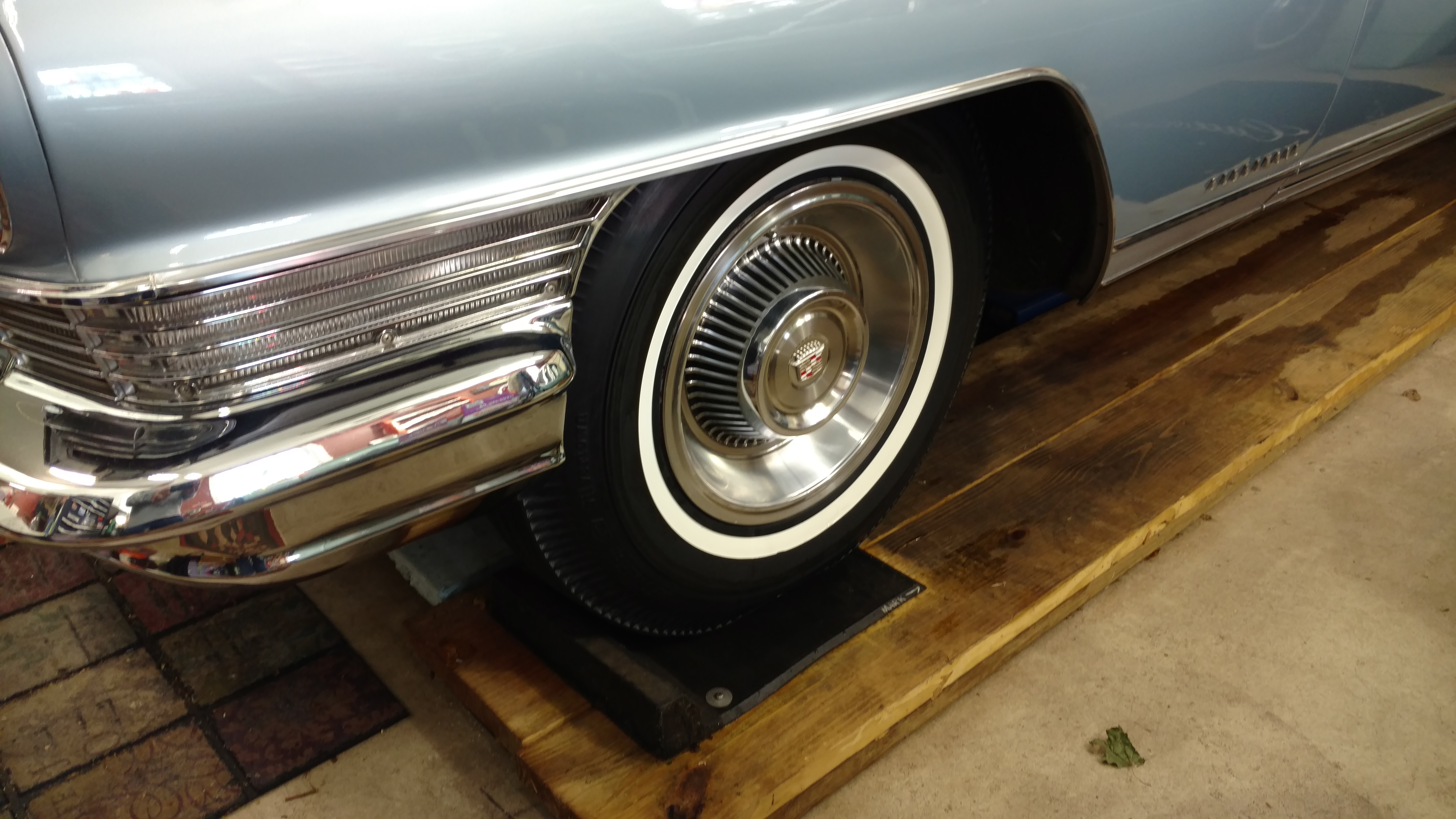 Put them on yesterday. Took the time today to clean them up. I love the look and the ride back from the mechanic was super smooth. I love the way they fill in the wheel wells and I clearly see she is riding higher. I should have done this years ago. I may have to put a little more air in the rear shocks just so as to see half the crest. I also took a measurement and these, unlike the factory spare have a true 1" WW. The spare is a little over at about an inch and an eighth. 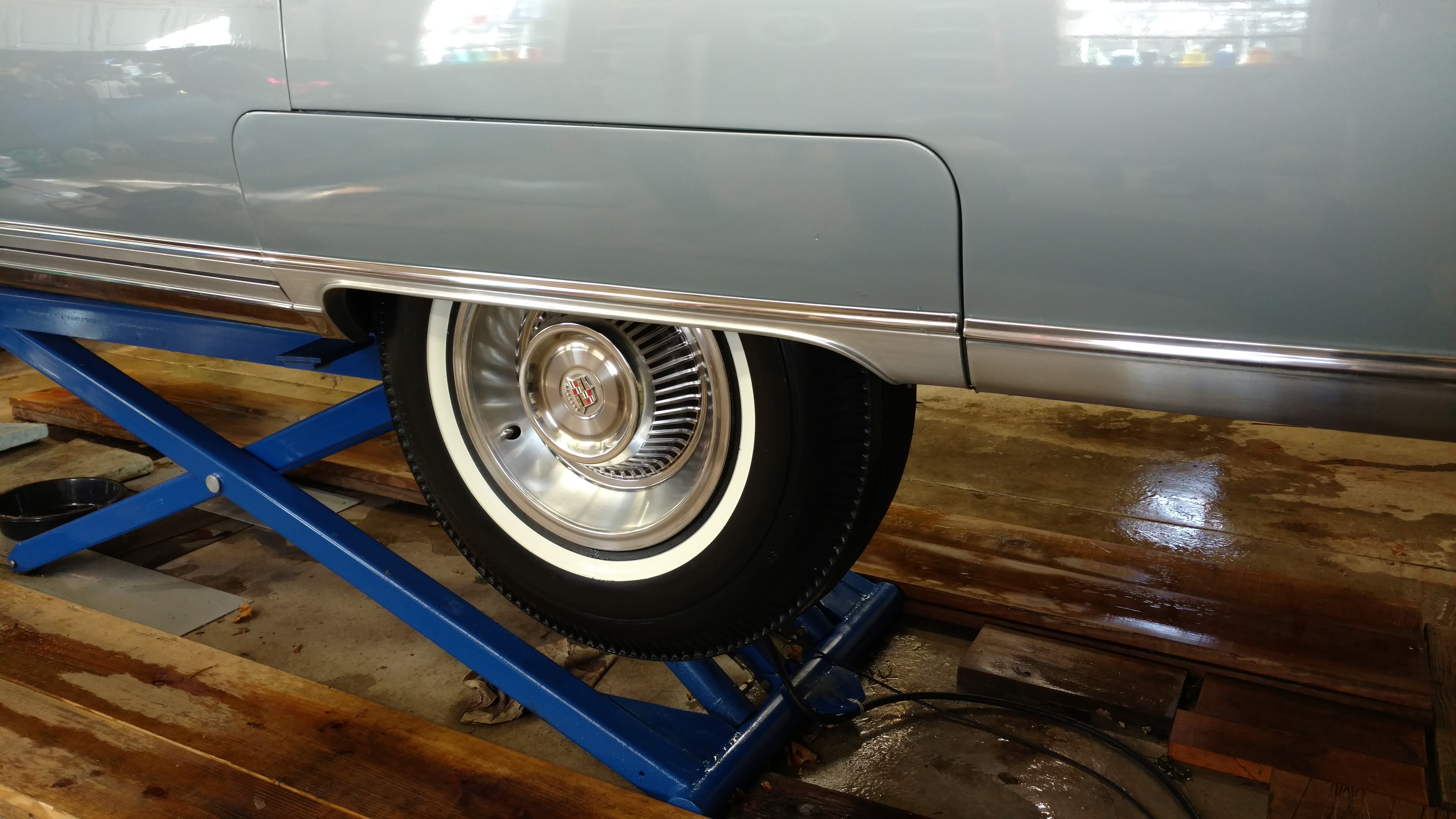 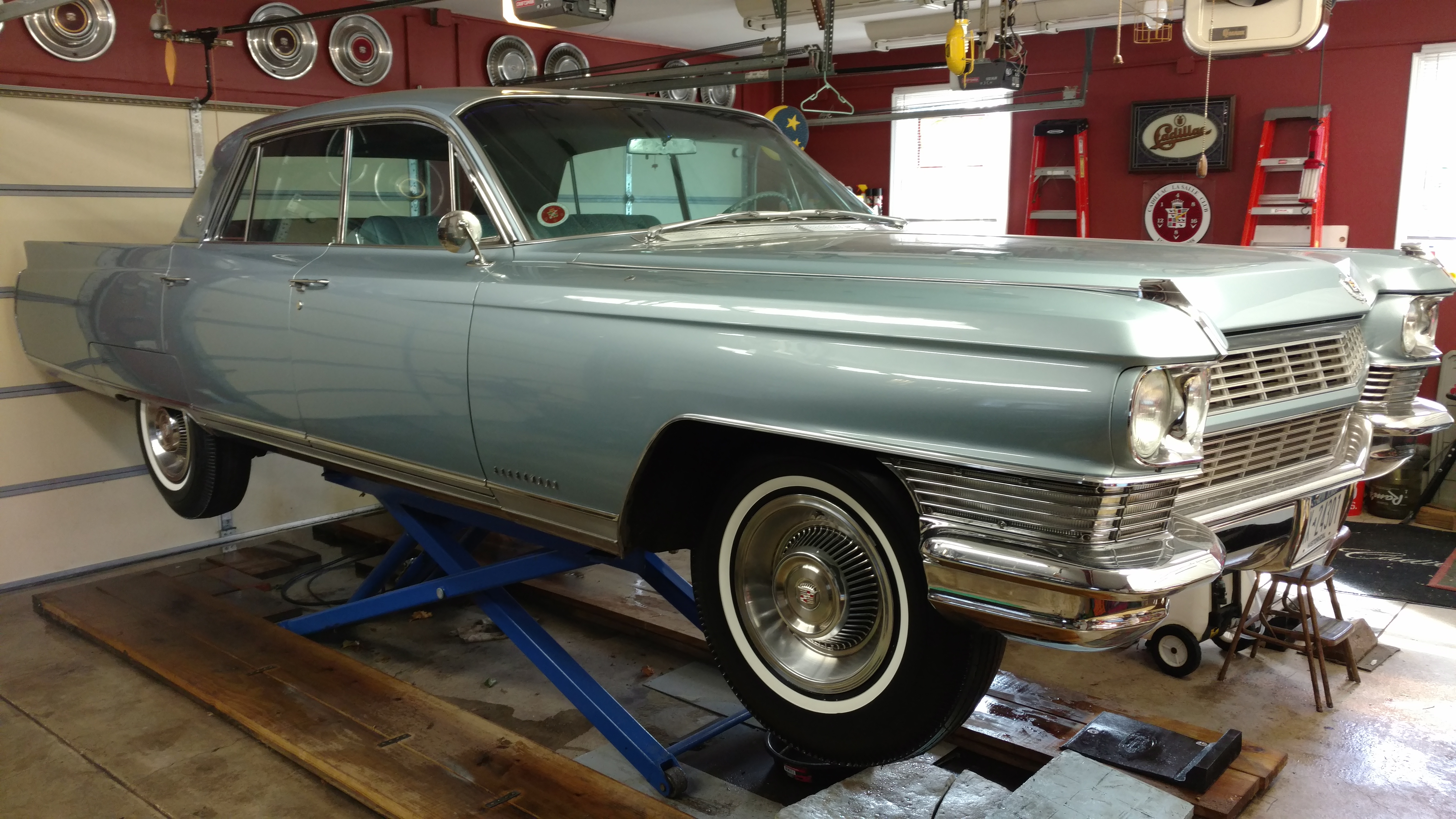 Since it had been 6 years since we posted the info on Original Tires & Rims in a newsletter and considerable addition information has been added here to the Help Page article, I included an updated article in this months December Newsletter.  I also made a few minor tweaks to this help page as I went along.

I have added the original US Royal spare tire example provided by Louis DeMatteo to our help article above, under White Wall Width. Thanks Louis. It would be great to find pristine original examples of the original BF Goodrich and Goodyear offerings. If you have undisturbed original spares let us know what you have and share with the group. I may do an update in a future newsletter as we add more info.

Yes, this is the route I'm taking. Not sure which though. I wish the Royals had the Pie Crust at the edges. I like the look of the higher ride. She is not a daily driver so I'm not concerned for the radial loss. A friend show up at a local Cars and Coffee with a 225 and had the BF G's on they looked awesome. 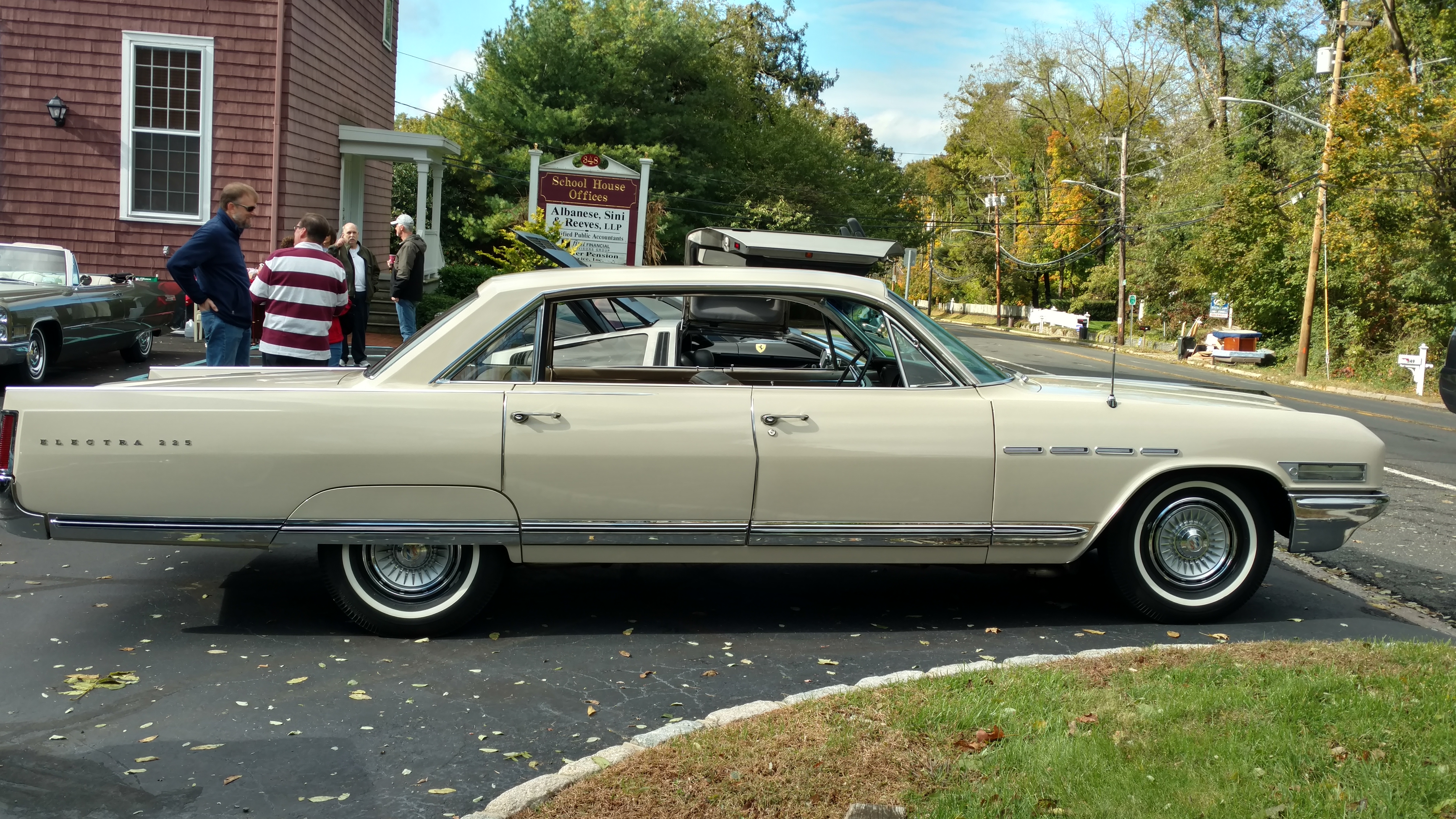 Louis, looks like 1 1/8" white wall and about 1" off the rim. Thanks, this is great info and goes toward confirming the 1 to 1.25" suggested white wall width if looking to stay original.

Hi everyone,Getting into redoing the trunk area on my 64 SDV replacing weatherstripping carpet etc.  The original rear speaker was not there. What was there was a round speaker laying on the trunk…Continue