I've had my worn original type spare in my 64 Coupe DeVille forever, but with the new (well unused and only 5 year old) spare from the last parts car this was a simple upgrade and a perfect example if why I got into the parts car side of things.

Here are a few pictures of the new spare and the original: 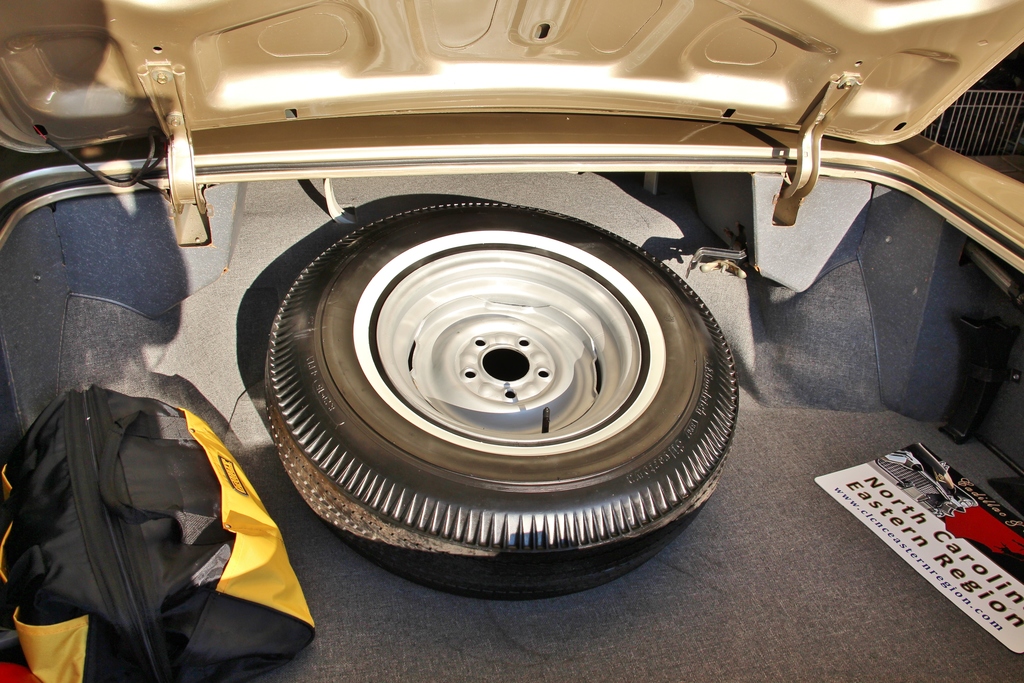 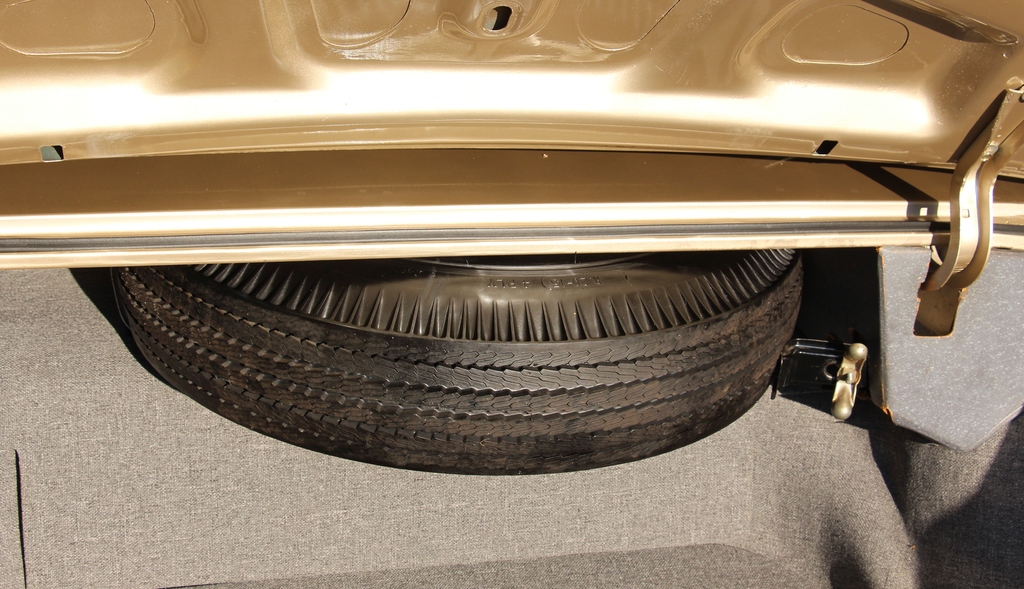 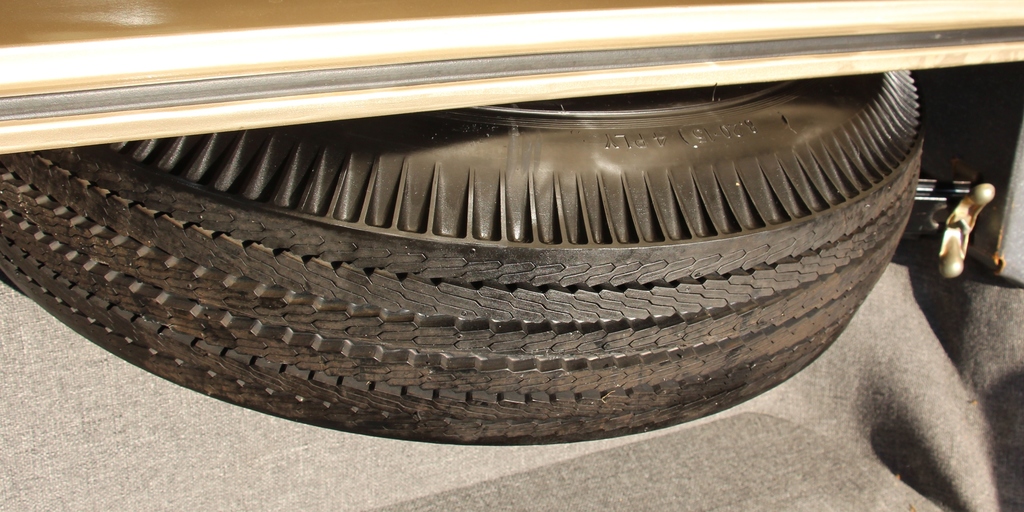 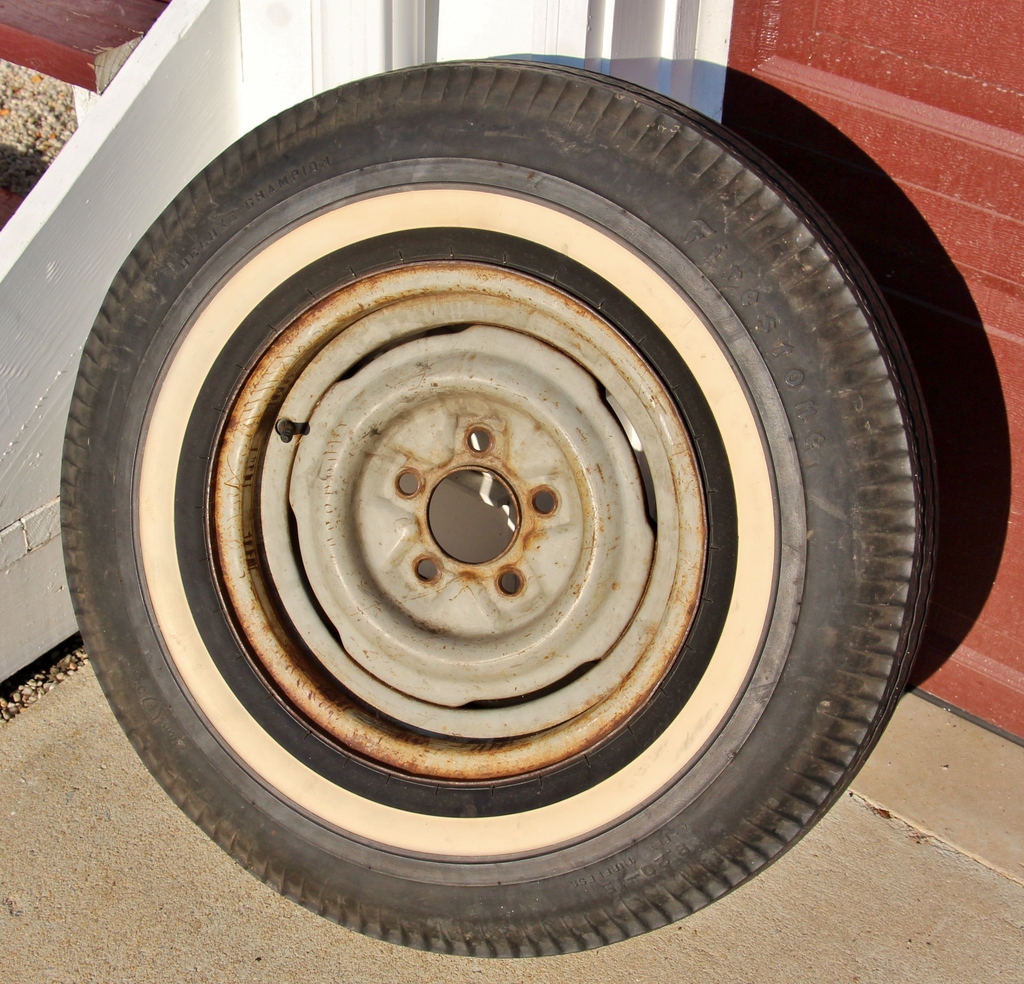 I tried to see if there were any reproduction 8.20 x 15  Firestone Bias Ply tires with 1" or 1.25" whitewalls out there and so far no luck but, here is a U.S. Royal reproduction 8.20 x 15 bias ply with 1" whitewall that looks further away from the rim.  For this tire I have to say I prefer the "pie crust" outer crown look of the Goodrich Silvertowns.

Tony, I'll probably go custom on my next car. Just after that tall original look for the golden boy.

Comment by Tony and Ginny 429 on September 8, 2013 at 11:30pm
Nice clean original look ,that you went for with the tires and hubcaps
Nice fresh emblems on the caps
I see a first place ,in a big event coming in the future of this 64
I will still go with my wire caps and radial tires on my convertible for a different kind of a desired style and ride quality

Jeff, I completely understood your issue,  but it is based on assumptions that all 4 tire brand were manufactured exactly the same and the distance and placement for 63 to 64 was exactly the same.

I like to go with facts and the reproduction BF Goodrich white wall band starts exactly 1/2" off the rim. I have two Firestones I believe are original 1963 and 1964 era tires and one starts about 7/8" off the rim and the one I had in my car which was pulled from a 1963 parts car some years back as I recall is exactly 1".

My goal is to one day have an original example of all 4 tire manufacturers. But even with that said, the point was the tire whitewalls and placement were quickly changing from 1962 to 1963 to 1964. Hopefully I have made myself clear.

I would love to see an original Firestone, Goodrich, U.S. Royal and Goodyear for a 1962, then a 1963, then a 1964 all side by side.  There is a chance the original BF Goodrich for 63 or 64 were exactly 1" from the rim (putting my repro 1/2" off the mark) but I have absolutely zero proof of that. If you have some original 1963 and 1964 spares I definitely welcome some pictures with measurements.  My goal is to present things as factual I can and to continue to learn as I go along. I absolutely know that if I can could back in time and put the 4 tires side by side for both 1963 and 1964 there would be nuances between them. Maybe not as night and day as you have between say the brake systems and carbs used, but there will be some differences.

I will also add that almost everything reproduced today is off at least to some degree, but you find what is the closest to what you believe should be on your car.

I am totally in favor of the correct white wall width for the correct original appearance of these cars. Anything else in my opinion (and art & design school trained eyes for what they're worth) ruins the look of the original, outstanding design intent of the Cadillac stylists.

However, I think I may not have made my point clear before. Its not the width of the whitewall stripe I am commenting on, but the positioning of the stripe on the sidewall relative to the rim and tread edges of the sidewall.

It seems to me and from the example of the older versus the newer repro bias tires shown above, that the older whitewall stripes were positioned further from the rim and closer to the tread, therefore appearing higher on the sidewall and relatively closer to the wheel opening.   This might have had the effect of making the car appear to sit lower on the tires.

As an example I would estimate the distance between the rim and the white wall stripe to be about 1 inch on the Firestone OE type spare in the above picture, and in the tire you replaced it with I would say about half that distance.  This seems to be true on the Kumho whitewall radials I put on my car recently as well- that the stripe is closer to the rim l compared to how these tires looked in 1964.

That was an original "type" spare but not my original. The spare I had been using you see in the picture is a Firestone with a 1.25" white wall. They are just one of 4 suppliers (Firestone, Goodrich, U.S. Royal and Goodyear) and each tended to differ a bit in design, and white wall width however the 63's seem to be a bit wider overall.  From my experience the 63's tended to come with 1.25 to 1.5 while 64's tended to be 1.0" to 1.25.

I feel the 1" is more correct for the 1964 and the 1.25" is more correct for the 1963.  The 64 you posted with the slight overhead angle tends to be a 1" but I've got stock literature of them showing a bit wider whitewall. You have to keep in mind this was an ever changing design as you go from year to year in the 60's and an early or pre production picture of a 64 might show a wider whitewall than say a late 64 production picture. This is why from my experience I would say 1" to 1.25" is correct for the 64. Anything wide would definitely look out of place.

You can see a write-up I did on my experience at: http://6364cadillac.ning.com/profiles/blogs/originaltires

and the difference in white wall location on the tire side wall is also seen in your original spare tire picture above!

I just figured out something else. The Whitewall"rings" on the Silvertown tires back in 64 were possible larger in diameter- further from the rim and closer to the scuff bar, that would give a different appearance as to where the fender line crossed the tire sidewall.  Cf the picture of the 64 Eldorado- factory promotion pic to your tire.  Also for comparison, is a '65 Pontiac Catalina with factory installed Silvertown 660 white wall tires (size 8.25x14).  I know this because I was there - when the car was delivered and scrubbing them later with Brillo when we washed the car. That's me in the front seat when the car was brand new. 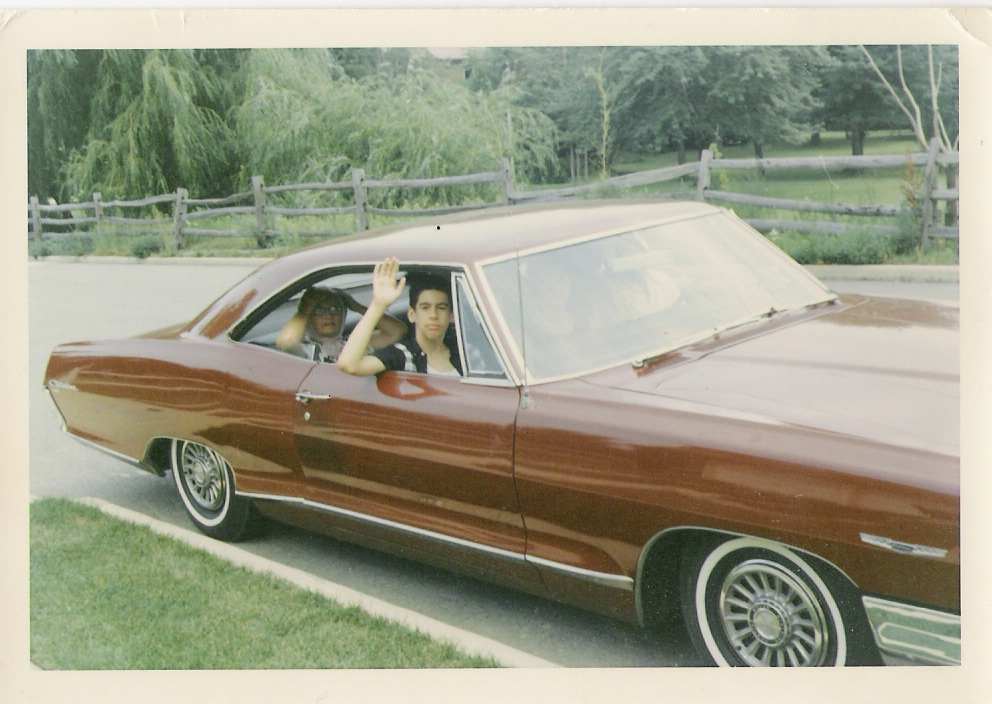 Thank you for your encyclopedic and informative answer. You are getting better all the time.

I knew you were going to cite the spec in the SM, and I am glad that you clarified that your car is probably a bit higher then average due to the HD springs.

My recollection from looking at your photo above is that the line of the fender would be slightly below the scuff bar of tire.  I will look for some original contemporary photographs ( Cadillac sales literature photos?) to see if I can verify my recollection.  Thank you.

PS Cheryl is doing a fine job in the yard- it looks great!

PPS I just emailed you with a request for some parts!

one of my rear reflectors must have fallen out and I’m having trouble finding a replacement. Anyone know where to find these for a 63? It’s the one between the tail lights .Continue