Thought I would share a quick story regarding something I did that I generally do not recommend - Free handed drilling a broken front engine cover bolt.  Before I jump into it I will say I do not like to mess around when pulling a car apart. I have all sorts of impact and cordless cutting tools, special "secure grip" tools, etc., and techniques I used to get stuff off. My bottom line is I don't want to get bogged down for a length of time with say a broken bolt.

So... yesterday when I was removing the super nice front engine cover from the running 429 I am parting out, the left lower corner 3/8" water pump bolt that goes thru water pump and front cover to engine snapped off at the head. I thought "OK, That's fine I will  have some bolt shank to grab when I remove the water pump". When I removed the water pump there was a about 1/2" to maybe 5/8" bolt shank exposed and thought "cool, the medium size monkey wrench will probably back that right off". If everything was steel, I would have applied the heat to the bolt 1st, and trying to spray the bolt, which is still 2"+ inside the cover is futile, I went straight for the monkey wrench.  The thing with the monkey wrench is something is going to turn... it will grab what it attaches to. Well the exposed tip turned and broke right off, almost flush with top of front engine cover.  I then thought well maybe the front cover will just slide off the bolt, but with some gentle and then some not so gentle prying, I knew it was seized inside the cover pretty good and really need to drill out or at least weaken the bolt.. and that is where I thought about hollowing it out.

And this is where I did my no-no .. that worked!  It is hard to drill straight free handed and the aluminum covers are like butter if you veer off and hit them with a drill bit .... however, I stared at that broken 3/8" bolt shank and that super nice cover and knew I did not want to wait to get it all off and to a machine shop to have it drilled out, so I took one of my new 1/4" cobalt hard metal drill bits (seen at bottom), loaded it in the DeWalt Cordless drill and placed it up next to the cover and saw it would just barely reach the engine block.  I knew this special drill bit for hardened still bolts would drill straight through the bolt, but knew I needed to be dead on straight.
After taking a center punch and tapping a center dimple for the drill bit, I took the 1/4" hard metal drill bit and drilled straight thru the center of the bolt, or as best I could, and kept stopping and visualizing the center of the bolt.  The cobalt hard metal bit went thru the hardened bolt pretty fast, and was probably completely thru the center of the bolt in less than 5 minutes.  This made me stop and think about all those times in my youth I had tried to drill thru hardened steel bolts with regular bits only to watch it spin forever and hardly make a dent. For those of you that have used the bits for hardened bolts know the huge difference ... these drill bits are a must if you need to drill thru something like this.

Anyway, after I had gotten to where I thought i was close to the block I stopped, made one last visual line of site look, and plunged the bit the rest of the way. After that, since I had some movement with the front cover as all the other bolts were removed, I gently pried the cover outward and with the bolt hollowed out, it started to slide off the bolt shank. When I removed the front cover I looked at my drilling to make sure I had not damaged anything. While I did not go exactly center thru the bolt I only varied slightly and only ended up close to the edge. I was chuffed that it worked and thought I would share. I wasn't about to let that bolt get the best of me even if it meant breaking my own rule.

Here is the type of drill bit you need in your tool chest if you plan to cut through something harder than wood! 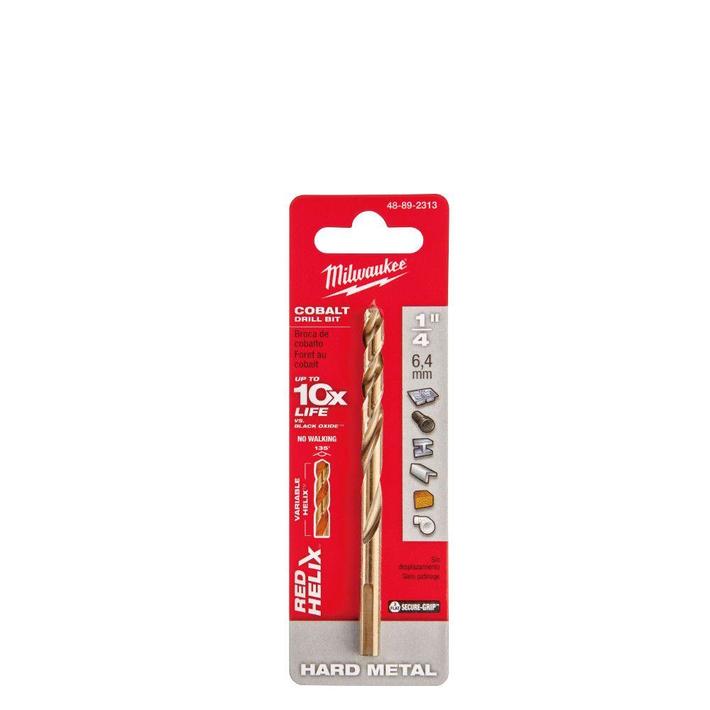 One thing I forgot to add to my main story, is I was left with a long cored out bolt shank into the engine block and thought, this is definitely going break off into the engine and will have to then tap that out, but by chance grabbed the long exposed bolt with pliers and realized it was freely turning, so was actually able to unscrew the rest of the bolt from the block by hand. I was double-chuffed... another made up word! LOL

Going up a bolt size is always a last resort, but you have to make that choice.  If something is a bit questionable I will torque to spec on the bench 1st and see how it holds.  The key terms here are "torque to spec". Most threads get stripped because someone takes say that thermostat housing bolt, which is supposed to be 10 ft lb and take a 1/2" drive ratchet and unknowingly take it down to 30, 40, 50 ft lbs...then get surprised when the bolt strips out or head pops off (if regular grade bolt). At 18 years old I was like Hercules on bolts and it took me a few stripped threads and broken bolts to start looking at torque specs or at least taking the conservative approach if tightening free-handed.

Well, I pulled engine from parts car #51 yesterday, the 1964 CDV, and started pulling some parts off the engine, and on the RH exhaust manifold one of the 2 center bolts broke off just below the head.  I knew that both center bolts had been replaced with aftermarket bolts as they had 5/8" hex head. The other bolt gave me a bit of a fit as it kept turning in place when it cleared the head and was just spinning.   Apparently the smooth bolt shank above the thread was a bit thicker than the stock bolt making it want to seize up inside the manifold thread hole.  I finally kept shooting some WD40 on the one bolt as a turned it, then tapping it downward with  the claw of a hammer.  It finally came out.

That left me with the other bolt which had snapped off near the top. I could turn the entire exhaust manifold back and forth a bit and could feel and see that the bolt was just seized up on the manifold and was turning freely inside the cylinder head.  So... I took the biggest hard metal bit I have... I think it may have been the 1/4" you see in the picture and like before drilled right thru the center of the bolt until I think I was almost to the cylinder head. The problem is i still didn't have much room to pry, and bolt still has enough meat on it to not want to slide off the broken stud. Anyway, I have it on the engine stand where I can flip it over and may try a bigger drill bit.   Luckily, the other parts came right off... and ended up with a pristine flexplate, adaptor ring etc.

Just to add, I usually have pretty good luck with the exhaust manifold bolts on these engines and rarely reak the original bolts. In this instance it was an aftermarket bolt.... might not even be a hardened bolt! For going after the regular bolts with the 9/16" hex heads, I always used a good 6-point 14mm socket (slightly smaller than a 9/16"), and tap it on the bolt head, and it it with the big 1/2" impact wrench. With the 14mm 6point it is not going to strip off, and there is something about the vibrating, hammering affect of the impact wrench that seems to help break the bolts loose, better than say a free-handed continuous pressure turn using say a large breaker bar.  All the other bolts were originals and was a bit worried on a couple on the left side, as the turning slowed, and my big 80 gallon air compressor kicked in to push the PSI on up a bit... but all the originals came out. Again, only issues were with those aftermarket bolts!

As Paul Harvey would say "Now, for the rest of the story.": https://youtu.be/tg7_A3SHKTA

Started by Stephen L Hrynda in Wanted to Buy 3 hours ago. 0 Replies 0 Likes

This is off topic as my daughter is NOT driving my '64 Cad in LA, but a yeoman old Saturn (recent impoverished college grad).  I am 2000 miles away and unable to review and service the car.  Can…Continue

In 1964, Cadillac only built two styles of Cadillac.Fleetwood Sixty Specials..... and the rest. LOL :-)Just curser down the page, regardless of what car is displayed.…Continue