Different Pulleys and different color was used on these pumps and pulleys. Here are a collection of pictures and some discussion.

You could put the pump and pulley in the freezer overnight. Then take a torch to the pulley, right around the shaft, but not on the shaft. That may do it.

The pumps are replaceable, but the pulleys are not.

Okay. That is I guess a way to do that. But how to remove the pulley and not ruin the pump? There has to be a way to take it apart and overhaul the pump.

I do use a pneumatic impact hammer. A few whacks on the end of the threaded stud, and the pulley pops off.

This is with the pump on the ground, and it will ruin the pump.

Comment by Jason Edge on November 11, 2016 at 6:57pm
I believe Russ had indicated he had removed them with an impact hammer. After I warped my first pulley 15+ years ago I have only sold the pumps with the pulley. Too bad there is no groove to simply remove it with a pulley puller. Bad design!

How to remove the pulley from the pump? Most pumps do have a flange but original pulleys don't have that. So is there a special extractor to use? 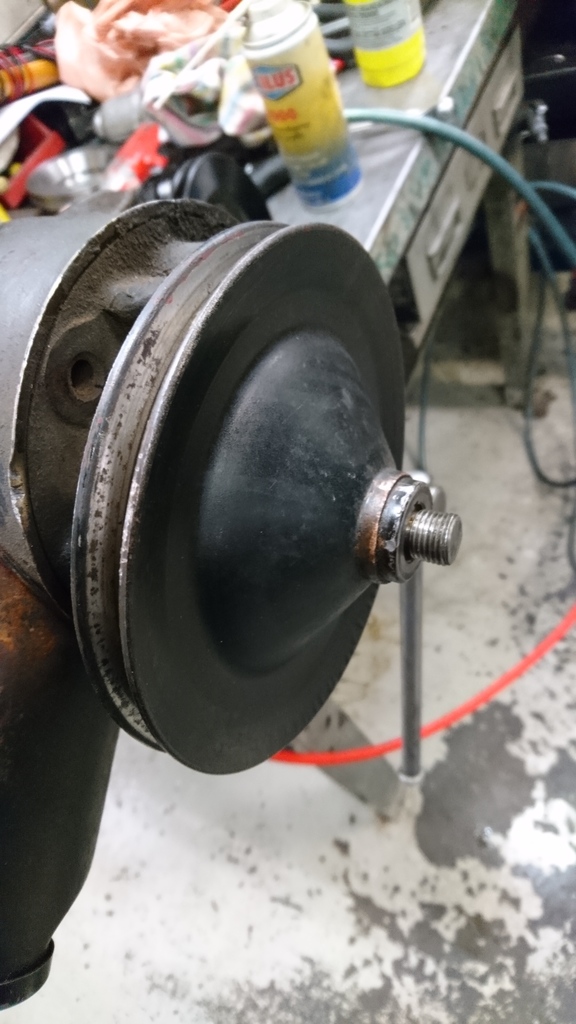 And a bit more info I had posted:

I did find the info on the power steering pump cooler added for 1964 in the Oct 63, pg 49 serviceman bulletin
...and a previous memo about the high pressure hose, but nothing about the pulley.
And another note:
Thanks David, that helps to confirm that perhaps that were available at various times in 1963 also. I've got 2 on hand took a closer look today and here is what I have when I take the wire impact brush and look at color:
Vented Pump 1 - pulley blue, pump itself black, pump bracket black Vented Pump 2 - pulley blue, pump itself blue, pump bracket black.
The crank and water pump pulleys have always been blue on the ones I've brought in and feel pretty good about those always being blue. Of course I see them painted later everything from Ford Blue to black! LOL

I like to think I've figured out quite a bit about the 63 & 64 Cadillacs in terms of what's correct, what's not, what was changed, when and why.

As I'm putting my engine back together, I'm running head first into an area I never really figured out...or if I did I have forgotten.  1964 Cadillacs came with either a solid power steering pump pulley or a vented one. It has been my experience that there were many more produced with the solid pulley and that solid pulley was almost always painted black.  I have seen probably 6 to 8 vented one from the 34 or so 63's and 64's I've owned or parted out. I don't recall any on 63's I've pulled in but my sample of 63's (9 vs 29) is smaller and maybe I've just not pulled any in.

In addition you will see literature and ads with the vented pulley like the one I posted below, and many advertisements, etc with the solid pulley.

Some of the guesses way back on the MSN boards I use to help manage  were:

It has been my observation that they were used on both AC and non-AC cars, they were spread across different body styles (e.g. 62 series, DeVilles, and Fleetwoods) and I have not been able to come up with rhyme or reason in terms of production #'s that used them.  My guess is they had an early plan to use the vented ones, and simply switched over to the solid ones at some point...but that's just a guess.

Perhaps there is info on this written somewhere.  I don't think it is in the Serviceman Bulletins. Either way I would love to know the history so if you have ideas or knowledge let me know. I've got 3 versions of the Master Parts book (67, 68 & 69) and will check that out again to see if it sheds any light.