During the process of a complete restoration (and color change) of my ‘63s interior during the winter of 2016, I replaced the aftermarket seatbelts that were in my car with restored original '64 buckles and retractors.  I had a terrific experience with Ssnake-Oyl Products out of Tyler Texas, so I thought I share the info.

In my opinion, the '64 seat belt buckle with the Cadillac Crest is the coolest looking seat belt buckle ever put in a car.  Apparently, they're not easy to find in good condition and they're not cheap.  With some patience, a craigslist search turned up a '64 Sedan Deville being parted out about an hour and a half away from me.

The '64 was being parted out by the widow of a car collector.  This was the last car of her late husbands stash, apparently all restored Cadillacs.  It was picked over before I got to it, but it had what I needed. 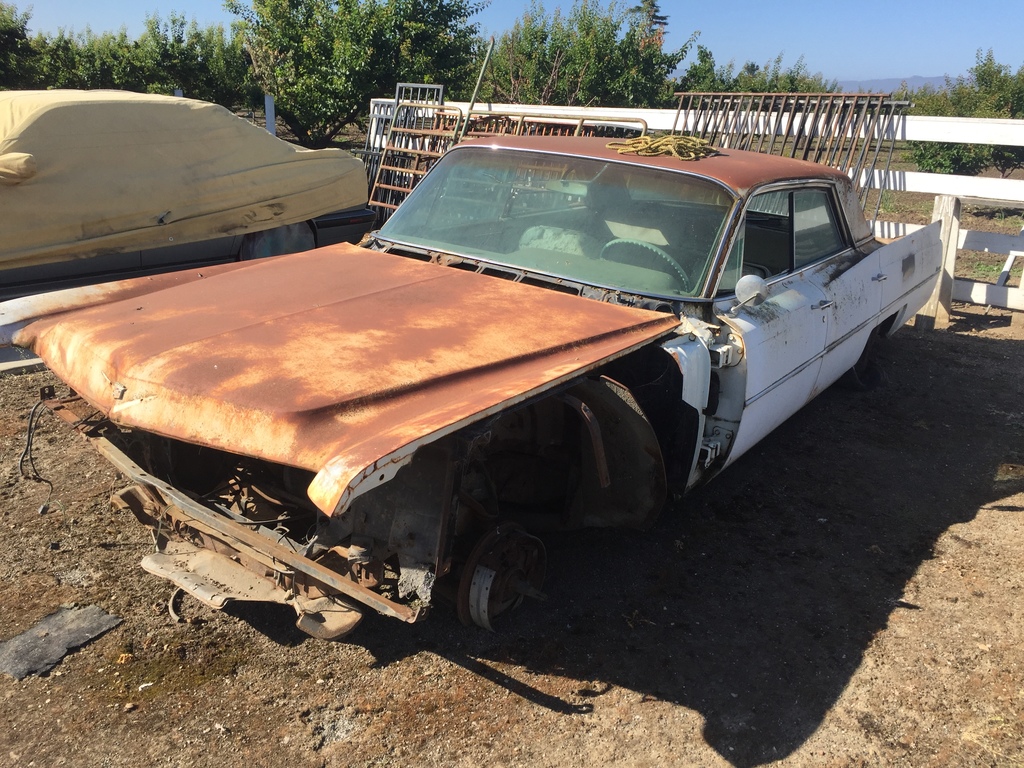 I lucked out and got the front buckles and retractors for $25, a windshield washer bottle for $20 and some other bolts and hardware.  The back seat belts were not present.  It turns out that one of the retractors was beyond repair so I bought a set from fellow 63/64 Chapter member. 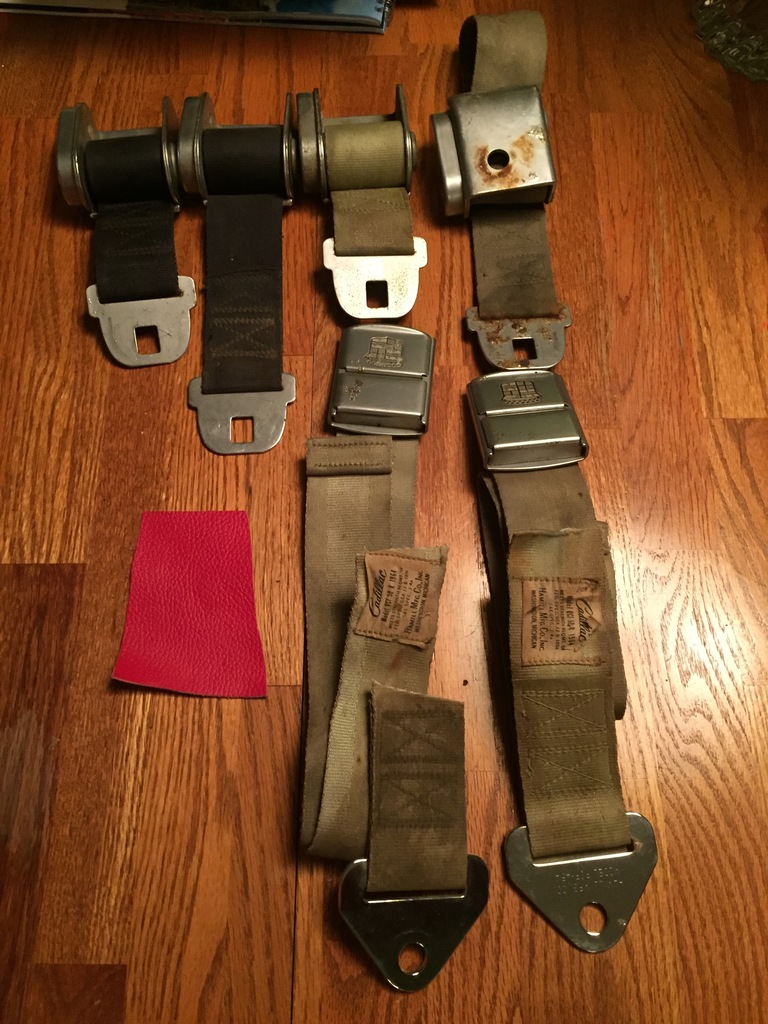 Finding a place to re-web and restore the buckles and hardware took a little research.  I checked online and talked to people at car shows and the one name that kept coming up with positive feedback was Ssnake-Oyl Products.  I called them up and from the start I could tell I had the right people for the job.  The phone staff were friendly, knowledgeable and helpful.  I had no idea what shade of red to go with - do I match the leather, the carpet, lighter, darker??   I sent them my parts for an estimate, and they sent me 3 shades of red webbing samples to compare with my other interior materials.  When I couldn't decide from those three, they sent me 3 more - no charge!  I finally landed on the red that originally came in the 1963 Cadillac (and plenty of other GM cars) which went perfectly with the carpet (which is repro '63 red) as well as the leather sample from the seat.

The pictures below don't do them justice - the restoration work is flawless.  I ended up sourcing another set of belts from eBay and had them restored as well so I now have 2 front and 2 rear belts, plus a few spare buckles and retractors.  They have the ability to either restore the existing buckles and, in cases where the buckles or tabs are too far gone, they have replacements.  They were even able to replace a damaged crest. 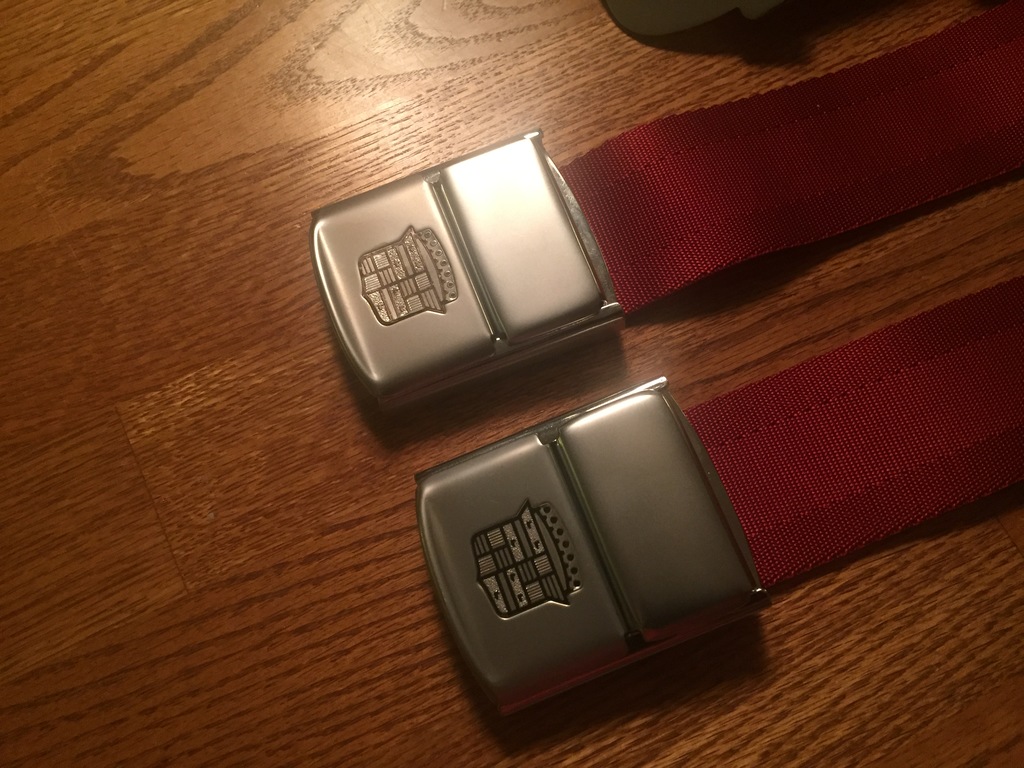 The labels on the donor belts weren't terrible, but they weren't up to Ssnake Oyl standards.  But no worries!  They can remake them!  For my own amusement, I had them date coded to match the build date of my car - July '63. 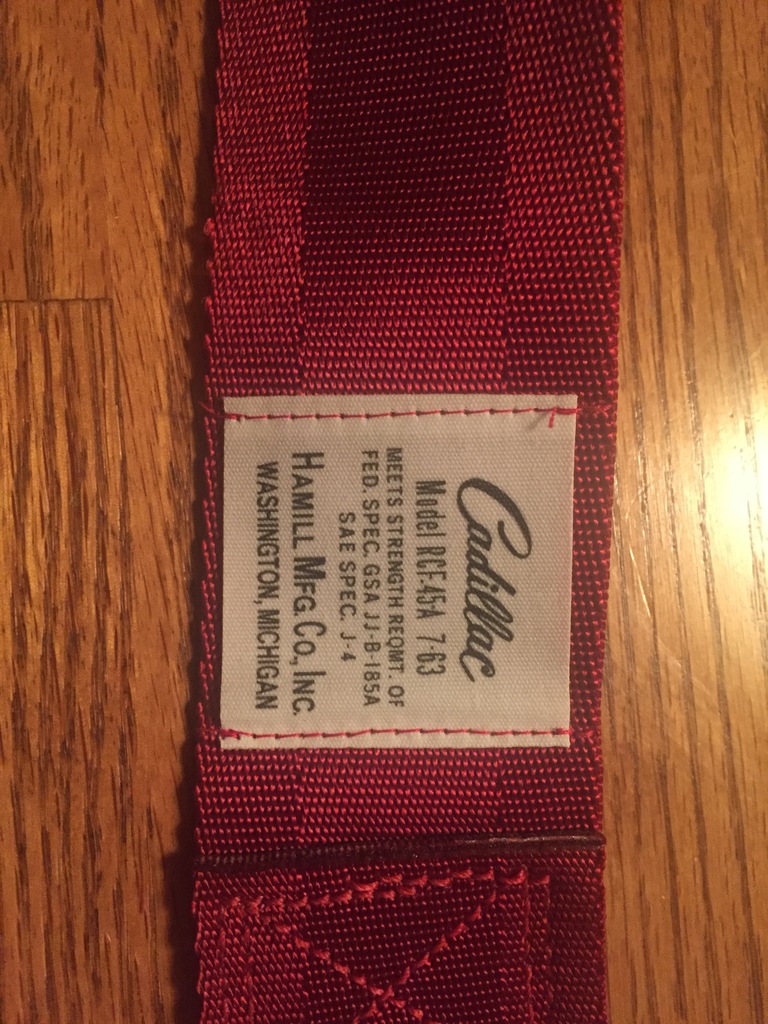 Getting an estimate from Ssnake-Oyl required sending my belts to them for evaluation, but there was no charge for the estimate.

The restoration cost of course will vary based on the condition of the buckles you send to them.  In my case, the hardware for the two rear belts were in very good condition, so I paid $278 to have both buckles cleaned and re-webbed with new labels.  My front belts varied in condition from "driver quality" to just plain ugly.  And the front sets have retractors which needed rebuilt.  Because of the extra work and a few parts that needed replaced, the front set cost me quite a bit more than the rear.

The results exceeded my expectations.

Russ, I added the cost info to the blog post, as well as the website link Anders provided.  I didn't put my exact amount because it's going to depend on what you send them to start with.  It's safe to say that for a set of four (2 front w/retractors) and 2 rear (non-retractor), expect to pay at least $600 if your hardware is in decent shape to begin with.

Mind if I ask the price of the seat belt restoration?

Thanks Kevin - I'm really happy with them!

Just ordered new tires for my 63. As the front wheels have reasonable wear I want to align them or at least have them aligned, but not sure if the alignment data in our shop manual are still the…Continue

I'm looking for a 1964 neutral safety switch part # GM1993653. Any one have one for sale or what can I use? Anyone have any solutions?ThanksDanContinue

I am getting ready to order roof rail weather stripping and rear door window leading edge seals for my '63 Series 62 6 window sedan model 6229.  I've been on the websites for Rubber The Right Way,…Continue

Started by Charles Fares in For Sale. Last reply by DAN SPURR 14 hours ago. 1 Reply 0 Likes