My '64 Cadillac DeVille had been sitting for awhile while I was travelling this summer and when I came home it had some issues starting. After replacing the plugs and the ignition coil, it was running better than it had in a long time but the brakes were sticking. I noticed the brake pedal was traveling a little farther than usual when slowing down. Soon after I noticed a hissing noise coming from around the brake pedal. Then I lost the brakes pretty much completely. I couldn't find any…

I've been waiting a long time for somebody to make this so I'm really excited to share it. I've seen people run Aux to the original radio, but this goes way beyond that. You can keep the looks of the stock radio, but with modern amenities like Bluetooth, Aux, and outputs for Amps and Subs. I posted the website and Youtube link to a Cadillac radio below. …

Does anybody know what the deal is with the caps under the cowl? I was cleaning out a mouse nest and found that the passenger side cap was cracked open. What are they there for? Does anybody have a replacement for sale?

Is anybody else watching this auction? I don't think I've ever seen hubcaps go for prices like this, though I can't recall the last time I saw real, in box, NOS caps. Link below

1964 Eldo just popped up on craigslist here in Maryland. The price is pretty damn reasonable. The car looks like it could use a bit of a freshening up, but not bad for the price. Wish I had the money. Link here  > 1964 Eldorado

Waking up an old trumpet horn

I just purchased a used trumpet horn at the Hershey swap meet. I was missing the trumpet horn, but had the two smaller horns. The two smaller horns both worked fine. I cleaned the bracket and bolted the trumpet horn down tight where one of the other horns was and hooked the power wire up to it. I heard a very weak honk and then just the click of the relay. The horn sounds like it has some corrosion shaking around inside of it. I'd hate to have to rebuild it. Any suggestions for reviving…

Hi, I'm hoping some of the other members here can chime in on this if they have experience with this. My convertible top motor burned out and while I was replacing it, I noticed the driver's side top cylinder was leaking. I ordered a new one and removed the current one and the bracket that attaches to it would not come off. It is held on with two philips head screws. One side came off with ease. The other completely stuck even after multiple shots of WD-40.  Is one of the sides reverse…

Found this cool short film with a '64 Cadillac. Enjoy!

My radiator has no reservoir tank and I did not see anything about one in the shop manual. I'm sick of constantly refilling my radiator so if anybody has one for sale, I could really use one.

My '64 deVille Convertible passenger side door is sagging to the point where it is almost impossible to shut. I attempted loosening the door with a jack under it, lifting the door and re-tightening, but had no success. Do I need to replace the door pins that go inside the hinge, and if so, where do I buy them? Any tips, or advice is much appreciated,

My daily driver '64 Cadillac deVille emitted some white smoke from the engine on start up today and stalled out. Now it will not idle and stalls when I take my foot off of the gas. All of the fluids seem fine, and I have not fiddled with the carburetor anytime recently. It appears that I have a leak from the passenger side valve cover as well. I'll be posting a link to a video as soon as it finishes uploading. Any ideas?

I have some serious trouble with the rear end on my car. I was driving a short distance today when it seemed to just break loose. I immediately pulled over to the side of the road, and it swayed so far that it broke the drivers side skirt off. I tried to get a look under the car and the drive shaft is hanging down at a very strange angle. Anybody ever have any similar problems? The car is VERY rusty, so I'm not ruling anything out.

I have an all leather front bench seat in my '64 DeVille that I am about to redo. That includes replacing the foam and repainting the side moldings on the sides of the seats. I want to keep it original and use real leather. I was quoted $1500 just to do the seat, but that seems a bit high. What is a reasonable price to pay for this job? Thanks,

All the reproduction floor mats that I've looked at have white emblems, but the ones that were in my car have colored emblems to match the interior. Can anyone post a picture of the correct style *(original)* floormats or give me your feedback on the new reproductions. My drivers side floor mat is missing, so I'm considering purchasing the repros.

Where can I find replacement clips for these? A few snapped taking them off the car. Do they reproduce something similar? 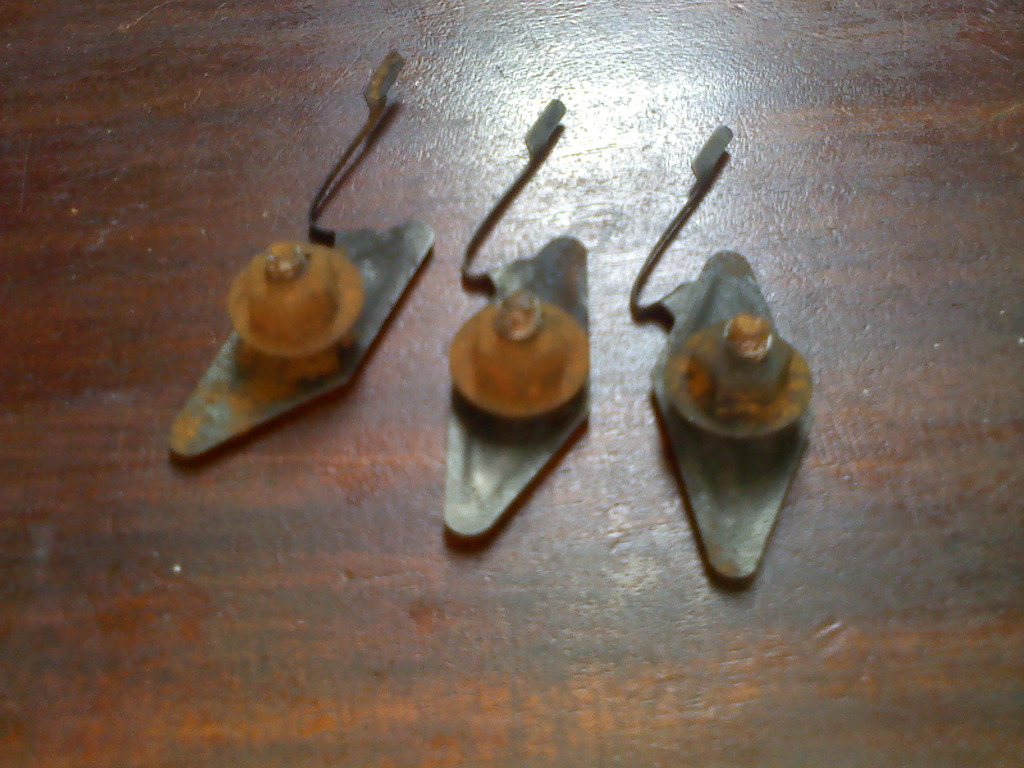 Can anybody give me some tips for disassembling the upper grill on a 64 deVille? I don't want to force anything and risk breaking it. I have the upper assembly removed from the car. The pieces look like they lock into place.

My compressor seized up today. Made some great smoke on the highway. Do they reproduce these. I'm looking for something original, or at least close to it.

Think I figured out why blog posts are still posted instead of the preferred discussion posts.My guess is that members go to their "My Page" and from there click the "Blog Posts" and then post a blog…Continue

A day late, but I saw a picture of MLK riding through Baltimore in a convertible and after a little research I found a different angle and saw that the car was a black '63 convertible so I had to…Continue