-The 1963 390 was a totally redesigned engine compared to the 62 and earlier 390's. It was 50+ lbs lighter, engine accessories including the distributor was moved to the front and used a new aluminum engine cover that incorporated the oil pump. Nearly 1/2" was shaved off the top of the block, connecting rods were shortened to keep the same compression ratio, block length was shortened by more than an inch.  They switched to a hollow-cast crank, which is 11 pounds lighter than the 1962 crankshaft, and switched to an alternator-rectifier charging system, which saved an another 10 lbs over the generator used in 1962. The bore, stroke and horsepower (325) were the same as the 62 390 however this was a lighter, more agile 390 than the old design.

- For 1964 they took the new redesigned 63 390 and increased the bore and stroke increasing the displacement to 429 cubic inches and horsepower to 340.

- The 1964 429 used with Turbo Hydramatics had a crank with a raise rear "flexplate" mounting area that was 3" across.

-Other than a few other minor changes including redesigned right exhaust manifolds,  larger higher capacity oil pump gears in the front aluminum engine cover, air breather housing inlet enlarged,  power steering pump cooler added, etc.) the 1963 390 is very similar to the 1964 429....especially the 1964 429 with the Hydramatic crank...as they will both mount up to the older style Hydramatics.

-In 1965, the engine was moved forward, the motor mounts were changed, the oil pan was changed to a front sump pan and their were other changes such as pistons that are different from 1964.

- In 1963 all body styles came with the Four Speed Hydramatic (shift pattern PND1D2LR and sometimes called Jetaways) transmission and bolted directly to the back of the 1963 390 block.

- The Hydramatic transmission between 1961 to 1964 will interchange with no modifications. They changed the reverse cone in 1962, but the transmission housing itself is the same.

- The 75 series and Commercial Chassis Hydramatic were slightly different in that they had a heavy duty reverse clutch and higher capacity oil pump, however, they are externally physically the same and will bolt right into a regular body style. (I put one in a 1964 62 series coupe some time back.)

-The new 3 speed Turbo Hydra-matic was introduced in the Buick as the Super Turbine 400 in 1964.  In order to not let Buick get a jump on Cadillac, The 1964 deVilles, Eldorados and Fleetwood 60 Specials used the Buick transmission using an adaptor ring to mount to back of the 429 engine.  It was then introduced in Chevrolet, Pontiac and Oldsmobile in 1965.

- The 1964 "Buick Borrowed" Turbo Hydra-matic was a one year only transmission for Cadillac.   Cadillac got its own new Turbo Hydramatic transmission in 1965.  For 1965, the bell housing casing was changed to allow the transmission to mount directly up to the 65 429, and the internal hydraulic circuitry was modified to provide a dual drive range as seen in the 1965 Cadillac Shift Quadrant below. - Swapping the Transmissions ---> Things to Consider

Hydramatic Drive Plate with 3 3/16" opening & Turbo Hydramatic Flexplate with 3" Opening!!
==> While the hydramatic drive plate with the 3 3/16" center opening will mount right up to Turbo Hydarmatic crank since the bolt patterns are the same, there is a gap and will usually rip out in short order.

==> the Turbo Hydramatic flex plate opening has to be enlarged to exactly 3 3/16" to mount to the Hydramatic crank end and...if it is not exactly centered and a snug fit it to will quickly rip out.

===> A best option is the swap out the correct 429 crank designed to fit the Hydramatic drive plate or Turbo Hydramatic flexplate.

==>  The 1963 and 1964 Cadillacs had different transmission crossmembers since in 1964 they had to provide for securing both the HM & THM transmission, and of course the rear mounts and Yaw mounts are different between the HM and THM due to difference in size and shape of the transmissions.

==> 1964 THM has adaptor ring, HydraMatic doesn't. Note, There are aftermarket adaptor rings available but they are pricey. You will want to check current prices and include that in your budget.

==> carbs: The original Carter AFB and Rochester 4GC carbs that came with the Hydramatic equipped cars, will not have the mounting block for the THM trans kickdown switch, so you will need a carb from a THM equipped car. 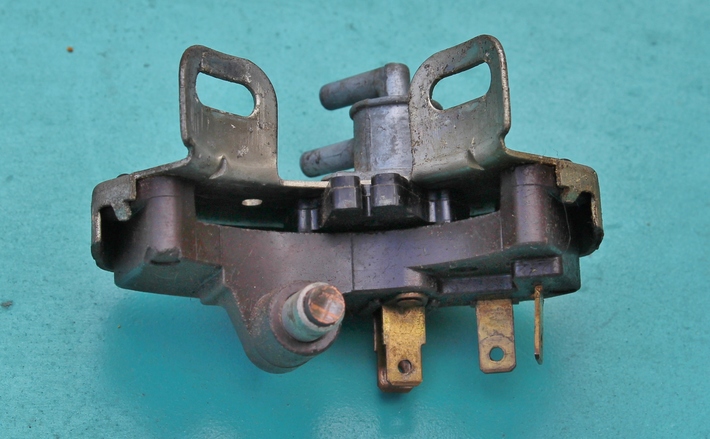 Finally: Shift Linkage Setup is Very Different Between HydraMatic and Turbo HydraMatic
The HydraMatic used a single shift relay rod setup from steering column shift rod to transmission lever (See 1st picture below); however, the Turbo HydraMatic used a more complex setup that included a long relay rod from the steering column shift rod, down to a relay bracket that mounted to the LH frame rail via 3 hex bolts, and then a short rod down to the transmission lever. (See 2nd picture below) 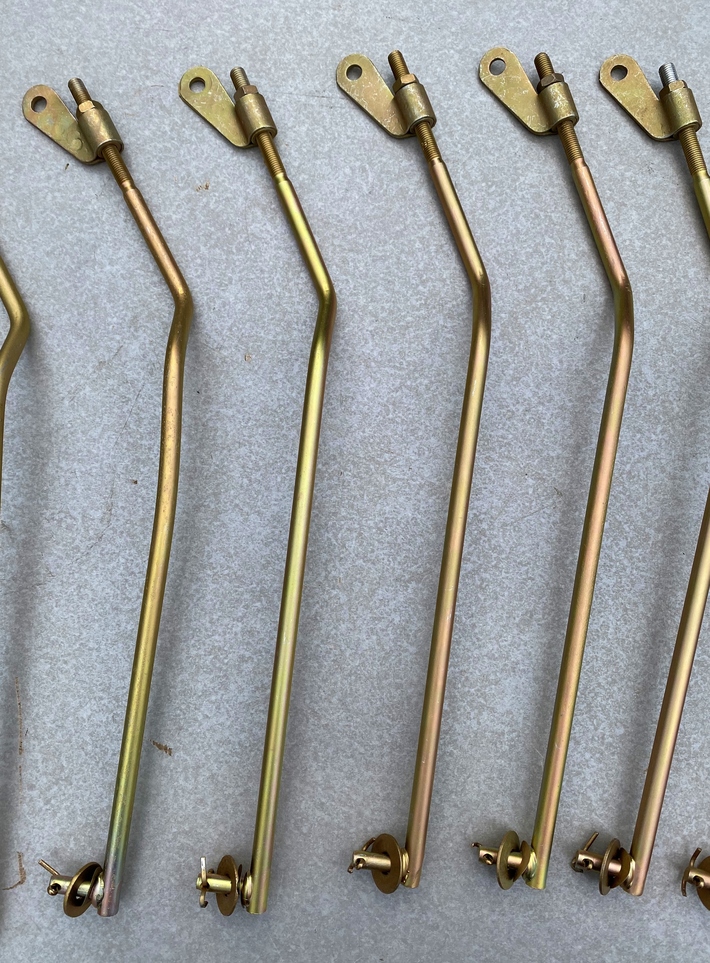 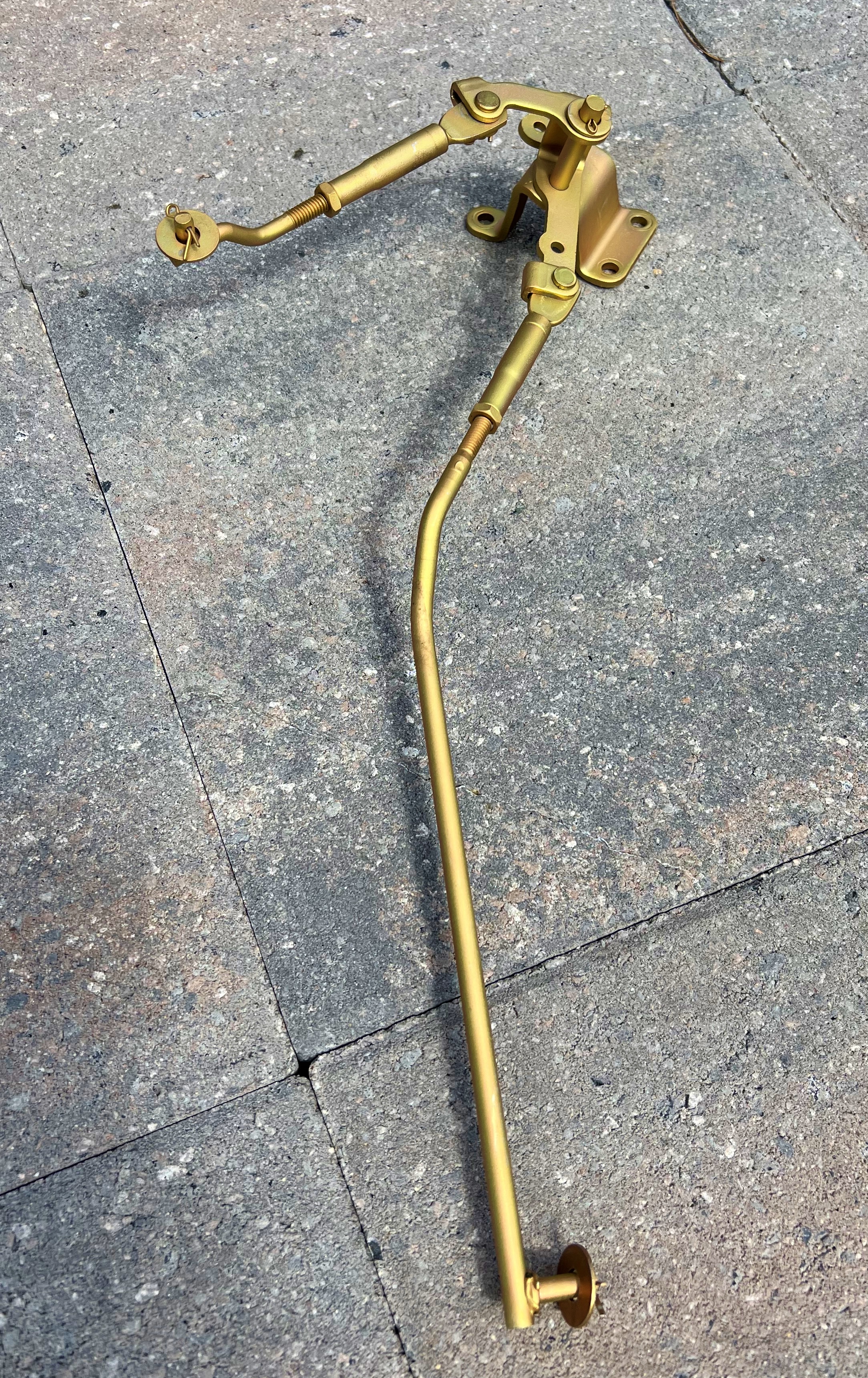 How tough are the frames on these cars?  I am looking at one where the floorboards are rusted through with vegetation coming through the holes.  It has been sitting outside in our wet climate for a pretty long time and it is a Biarritz with no top so you can imagine what the upholstery is like.  I am considering risking a couple of thou to see if the frame is still intact enough to do a rebuild.  This car would be a total rebuild but the glass and brightwork all seem to be intact.

Good point, once you open it up who knows what you will find.

You might be right about the oil pickup, but seeing how some things were modified in my car, I rather be safe than sorry.

If they reworked the 65 pan, you should already have a 64 oil pickup tube to match it inside. A 65 pickup tube would be very short an not reach the rear of a 64 or reworked pan.

Chris i have a 65 motor in my car. Whoever did the work did do a pretty good job. Look at the motor mounts from underneath to see how well it was mated to the old position. Mine has the original transmission and adapter plate, the transmission mount is original and in the correct spot. Therefore I know they indexed everything from there and is correctly positioned. The engine should be sitting a half inch or so forward as measured at the motor mounts from the original ones. My mounts were made by cutting the ears off the engine side and welding the 65 ears on in the correct position.

Comment by Tony and Ginny 429 on February 2, 2018 at 10:53am
If you do not burn any oil that would mean your --engine rings are sound --and no chance of Blow By into the crankcase
The only other time fuel can get into the oil is if you have a mechanical fuel pump failure as a rule
So checking for contamination --should not be that necessary --unless two of the above things are taking place

Comment by Tony and Ginny 429 on February 2, 2018 at 10:42am
Chris
You are very welcome
After going to operating temp and shutting the car off --wait a few minutes --for the oil in the top of the engine to trickle down
Take your reading and score the dip sick ( with a grinder - hacksaw etc )
That will get you your full capacity crankcase oil mark you need for future reference
Thought i should add - the waiting a few minutes to help get the oil mark on the dip stick as accurate as is possible

Thanks Tony I’ll be sure to do that in the future. The car doesn’t burn oil thankfully. But I always check it for fuel contamination.

Thanks guys! I didn’t know the oil pick up and screen are different too. I guess I’ll need both.

Jay, I’ll go take a look under the car later on tonight and see if there is any clearance issues with the crossmember. The engine does seem pretty close up to the firewall than usual. Modification were made the engine mounts in order for the engine to fit properly in the X Frame.

Not sure what the dimensions are for correct engine fit in terms of distance, height and length between the firewall, the frame and radiator,   but I’m going to have eyeball it and trust my gut that it will fit just right.

Hi Guys Hoping someone could recommend a vender where I can purchase a transmission mount for my 64 Sedan De Ville.  Thanks!Continue

Well, parts car #58 is history. Rear end came out late yesterday (1st Picture below), it was delivered to the metal yard this morning (2nd picture) and for the first time since I bought my 2013…Continue

Was there Originally Carpet Inside 1964 Eldorado Center Console?

Is there supposed to be carpet inside the '64 Eldo center console?There is carpet in mine, and it's a deeper pile than what's on the floor (which has probably been replaced.)Here's some pix of mine.…Continue

I'm looking for 2 good condition lower front bumper ends for a 1963 car. Can anyone help please?Continue