Transmission tail shaft bushing (s) and seal for 64 with TH400

Now that I have acquired a transmission mount for my car I want to also buy a transmission tail shaft bushing (s) and seal. I remember Clovis mentioned he replaced his a while ago-any chance part numbers could be shared?

Thanks. In looking on the internet it seems there may be two busings AND there may also be a large one and a smaller one. Is that correct?

Also, can this be done with the transmission still in the car?

I just reached out to Fatsco the other with this same question for my 63,  They said the transmission  came with two but the replacement is a single larger bushing instead of two smaller ones.  The bushing they sold me is 1 1/4”,  I haven’t removed the extension housing yet so I can’t comment on the size of the originals.

Interesting. I recently purchased a huge lot of NOS transmission parts from a friend who is closing his business. As a result, I have the ATP (Automatic Transmission Parts) catalog of parts they made. It lists one bushing with an outside diameter of 1 13/16 inches as the only choice. Their part # JB-15.  I may even have it as I have not yet checked the inventory and there are probably 300+ items to go through. Now, I'm really confused. Especially since I don't even know if I need it, just want to acquire it for the future.

Anyway, does the tail shaft have to come off to do this-do you know?

Beware that the bushing is staked in there, You will need a proper bushing driver to do this right. An arbor press will simplify things too. I drove mine out carefully using a punch with its end ground at an angle. It took some doing because it was staked, but it came out. I used a bushing driver to push the new one in. If memory serves, it is pressed in from the rear, until it is flush with the edge of the bore it resides in. Replace your oil seal while you are at it. You'll need to get that seal off first to to the replacement of the bushing anyway. Before you drive the new seal in, check the driveshaft fit in the bushing again. with it oiled up, it should fit without play. Drive in a new seal, and bolt the extension housing back in. Check that bearing in the driveshaft too.

In the photo of my extension housing, the inner most ring you see is the bushing.

Noted with abundant appreciation. This is likely something I am not prepared to do myself, but armed with this knowledge I can select a shop that I can have confidence in. Any chance you live close to San Diego as I'd be inclined to try it with supervision.

Can lack of adequate lubricant (tranny fluid) on/in the yoke cause a vibration?

Don't think you would get any vibration from that. But not sure what part you are referring to.

I had problems with vibrations. Fixed/replaced the C/V joints. Replaced the center bearing. Replaced the rear wheel bearings. Even replaced the rear axle and overhauled the transmission. Still this loud "scraping" sound and vibrations. Nearly gave up, but was looking on an episode of Car SOS and they had a similar problem. Their solution was to balance the propeller shaft. I removed mine. Took it to a shop. The guy that owns the shop and only does propeller shafts sorted it out in a few days. Got it back. Refitted. And took the car for a spin. Not any sound or vibration. Nothing except the music from the original 429. Everything like new!!! This was last summer. Just before midsummer. Was very well spent money. All 600USD... 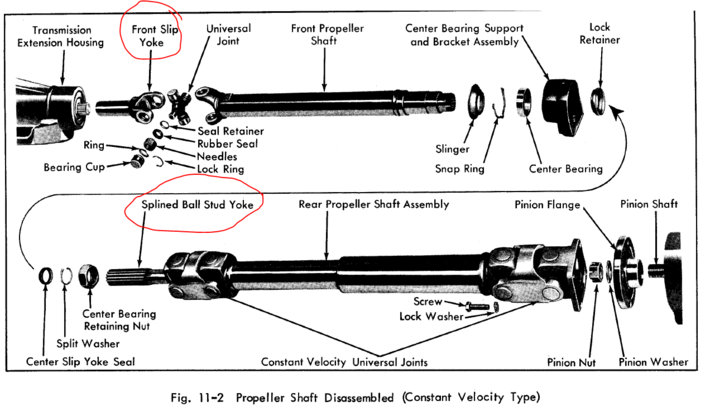 A story with a happy ending! Sorry for the confusion, I meant the very front yoke that goes in to the transmission. Not sure if I gave it enough trans fluid lubrication when I put it back in after swapping out the driveshaft and new center bearing and support.

When installing the front yoke into the transmission housing seal you apply some trans-fluid to make it easier to push it in. You can fit the yoke without any extra trans-fluid, but it can be difficult and in worst case do some damage. When the yoke is in place the trans-fluid inside the gearbox will lubricate and keep the seal in good condition. As you were able to fit the front yoke you did have enough trans-fluid applied. You will not get any vibration from the front yoke.

From what you say you did some overhauling on the propeller shaft. I'm guessing you also checked Jasons video on C/V joints. However this is a lot more tricky than most car guys would think. If you have been able to rule out wheel bearings and the rear axle as cause of vibrations your only option is the propeller shaft.

Your vibration most likely comes from the propeller shaft being imbalanced, the universal joints worn, center bearings damaged or the C/V joints not up to spec (a 55+ old car will have worn springs and most likely a deformed ball in the C/V joints).

Do consider the weight of the car, the horse power and the length of the split shaft and you realize these cars are more difficult to sort than your average Ford/Chevy. Take the shaft to a reputable shop and get is balanced. I know one in Stockholm that will get the shaft including C/V-joints to 100%. Shipping ain't gonna be cheap but you get it right.

I had a new transmission mount installed and a modulator (wasn't getting half throttle downshifts) and a tail shaft bushing (very worn) and a rear seal. Vibration has improved considerably and tranny tech says any remaining vibration is all in the drive shaft. I can live with the level being produced as it is very minor and goes away at higher speeds of 70 to 75 (the pace of traffic in and around San Diego's freeways). Thanks to all for inputs. PS-the whole thing came to $250, which is considerably less than what I had expected to pay. Mira Mar transmissions was the shop on Silverton Ave in San Diego (near Mira Mar air base). 858 549 3777. Careful, competent and reasonable.

Great info to know especially for the locals there

Started by Planet-automobile in Wanted to Buy 2 hours ago. 0 Replies 0 Likes

Hello, and thanks for adding to group!I am restoring 1964 429 engine which I bought as dismantled. It is said to be smoking in driving and has been stored as parts for a year. It is most probably…Continue