Here's something cool I stumbled across on Youtube. Pretty cool. It's like a power washer with sand.

A group of my car buddies & I go on a monthly food cruise, sometimes breakfast, lunch or dinner. Last Saturday we took a 40 mile cruise down country roads from Austin TX to Salado TX. We went to a shop there called City Garage that specializes in Lincolns & had lunch afterwards at a good burger joint in Salado. We've been lucky this winter with beautiful weather for the most part with just a few cold rainy days in between. Here's a little video I put together from the cruise. It's a…

Our local CLC chapter had their annual show at Covert Cadillac in Austin TX yesterday.

There is an interesting story on the 61 limo. A man wanted to purchase a car for some nuns. They reluctantly agreed but insisted that it be bare bones with no radio or air conditioning. When the 61 series 75 showed up of course even without a radio or a/c it was way too ostentatious. The nuns tried to return it to the dealer but they said they could not sell it because it didn't have a/c. So most…
Continue

I went to the annual Lincoln show in Salado TX on Saturday. Yes, I have friends on the dark side. LOL. I brought my 63 CDV of course. There was also a pristine 67 Eldo, & a 89 Allante in the spectator lot so Cadillac was well represented. On the way home we stopped at Hardtails Bar & Grill in Georgetown TX http://www.hardtailsbarandgrill.com/index.html and there crashing through the wall is a full sized front end from a 64…

Quick question: Do we all get wind noise through the closed vent windows at highway speed? I do. The rubber has been replaced. I have heard from a couple of friends and fellow car guys that that's just the way vent windows are. If there are any of us out there old enough to remember if the vent windows were loud when the cars were new that would be helpful. I have tried adjusting them here & there but they are far from silent at cruising speed.

I know we have discussed gasoline here before. I posted this link on another car forum  http://blog.hemmings.com/index.php/2012/11/14/tech-101-ethanol-in-gasoline-and-its-effects-on-collector-cars/?refer=news

During that discussion another member posted this link to a gasoline white paper. It has great detail on gasoline, octane, ethanol, etc. More…

A friend just emailed this to me. Not bad The car can fix itself except for appaernetly some bad aftermarket wiper blades that don't sit right LOL.

I'm sure many here can appreciate...https://www.youtube.com/watch?v=cG8xUNysnTo&feature=youtu.be

Is anyone using this on their Carter AFB? I'm currently using a manual choke but would not mind installing this if it works well…

I finally found and fixed the remaining pesky water leak into the passenger compartment. This is the 1st time since owning this car (28 years) that it does not leak from somewhere. I have resealed the windshield, back glass, trunk seal, door seals, & window seals over the years. This last leak eluded my for the longest time. Water would end up on the front passenger floorboard after washing the car. Thinking it was still the windshield I pulled the dash pad and had a friend pour water…

I recently found and fixed a pesky leak where water was entering the passenger compartment and winding up on the front passenger floorboard. I can post details about that if anyone is interested in a separate blog. My wipers have always as long as I have owned this car (29 years) had a delay from the time I flip on the switch til they start wiping, up to a minute sometimes. I have also seen where they have a delay after I turn them off til they stop wiping. I had the dash out recently and…

I was at a cruise -in near Austin and stepped inside a Schlotzskys there and saw this hanging on the wall: 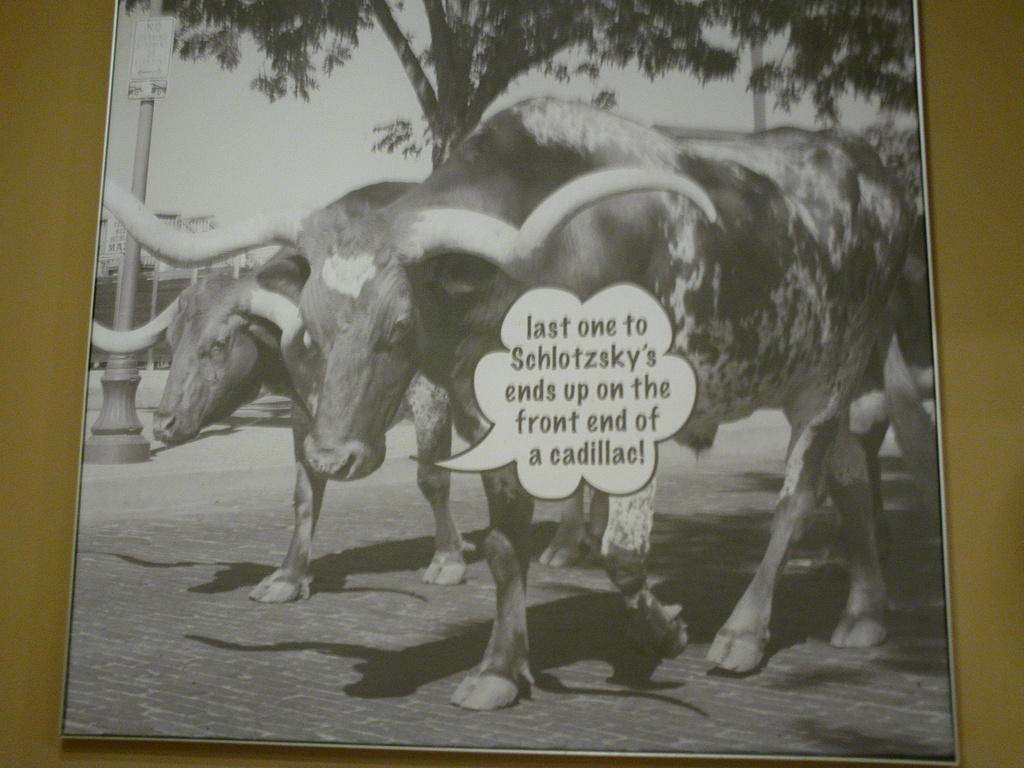 63 Hydra-Matic won't shift out of first

Hello everyone. I had a perfectly good shifting Hydra-Matic transmission until I elected to fix the leak at the dip stick tube. I just did a quick seal with gasket maker since my current tube is…Continue

Rear brake lock up when cold

Hi everyone, ever since getting the car back on the road, the rear brakes grab when they are cold and I’m moving at slow speed.  Once I get along the road and stop they are fine. I see some posts…Continue

Good afternoon to all my fellow Cadillac owners! I have a question about the vacuum advance on my car. The car is a 64 without a/c and a Rochester carburetor. I noticed that I have vacuum at the port…Continue