The 63 and 64 from bumper end assemblies are similar in the way they bolt up and you can take the entire 6 pc 63 and replace with the6 pc 64 or vice-versa.
Here is the lowdown on the 63 & 64:
The 3 uppers are basically the same from 63 to 64.
The upper left and upper right is exactly the same.  The upper center is the same except the tabs on the 63 upper center have holes for mounting the lower grill.
The 3 lowers are different from 63 to 64.
--> The lower ends (buckets) are wider/fatter on the 64 and where they mount up to the center lower is shapped different between 63 to 64.
--> the lower center on the 63 has a more pronounced/raised shape, whereas, the 64 lower center has a more contoured and smoother lower center.
What is a direct bolt on from 63 to 64?
--> Any of the 3 uppers are interchangeable as mentioned above.
--> You can take the entire 6 pc bumper end off one year and put on the other.
--> You can take the 3 lowers from off one yeare and put on the other.
I've heard of people forcing the 64 lower ends onto an 63 lower center and vice versa but you will need to do some bending to make it work.
As far as mounting a 62 or earlier bumper end on a 63 or 64 I have unfamiliar but would definitely think you would be more likely to do so if you replaced the entire bumper end.  As mentioned earlier and above, even the 63 to 64 lower sections are different and are direct bolt on.
Jason Edge

Painting and undercoating these bumper ends is an excellent idea.  The original owner of my car said he had replaced the front bumper ends when the car was about 15 years old do to rust.(Colorado car at that time)  He solved the problem by drilling a small hole "1/4 inch" in the bottom of each of the replacement ones to let the water drain out that would get trapped in there. 35 years later no rust issue whatsoever and the holes are completely invisible until you crawl under the car. Just another thought to help resolve the rust issue with these end buckets.

Anytime over the years I pulled in decent front lower bumper ends, I would get all the loose stuff out of the bumper ends, go over with the impact wire brush, and prime and paint the inside with a flat black. I have also added the thick undercoating spray to them from time to time. 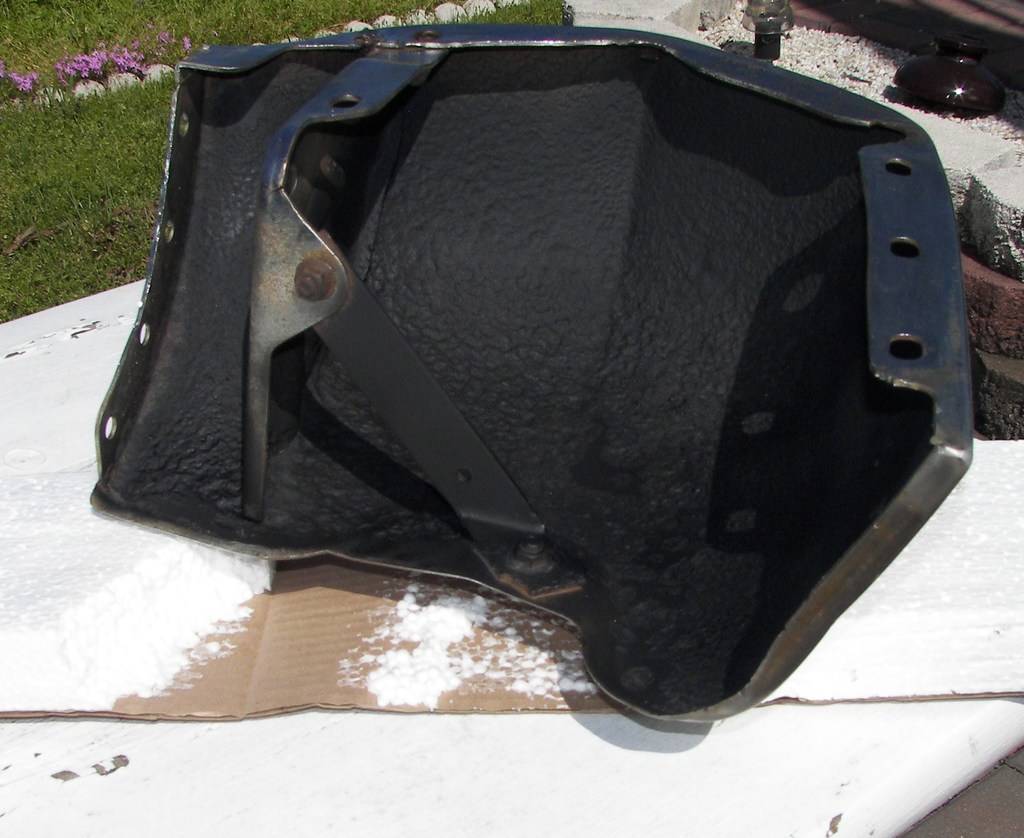 It is a good idea to paint the inside of those front bumper ends. Water tends to sit there and causes it to rust from the inside out. Here in Maryland, almost anything without paint will rust, even in the garage. I'm almost certain that they were not painted from the factory, but it is definitely a good idea to do this while you have them off.

I am cleaning up my 1963 grill and while the chrome is good it is stained so would like to take it apart for buffing. Anyone have some insight into how to disassemble the egg crate? Looks straight forward enough with the dividing bars slotted into the horizontal thicker bars but they don't want to budge. And it looks like everything is slotted alternately...anyone have a short cut?

And on another subject, I have been getting my chrome back and after sitting for a month, the pieces get some surface rust on the back. I asked my chrome guy about it but he says that is how it is done and if I want to preserve the back of the chrome (bumpers) I need to paint them. Sounds bogus to me...after asking him if that is how it would have been done at the factory and he said "yes". I have never done a lot of chroming, anyone have an opinion? Thx...~S